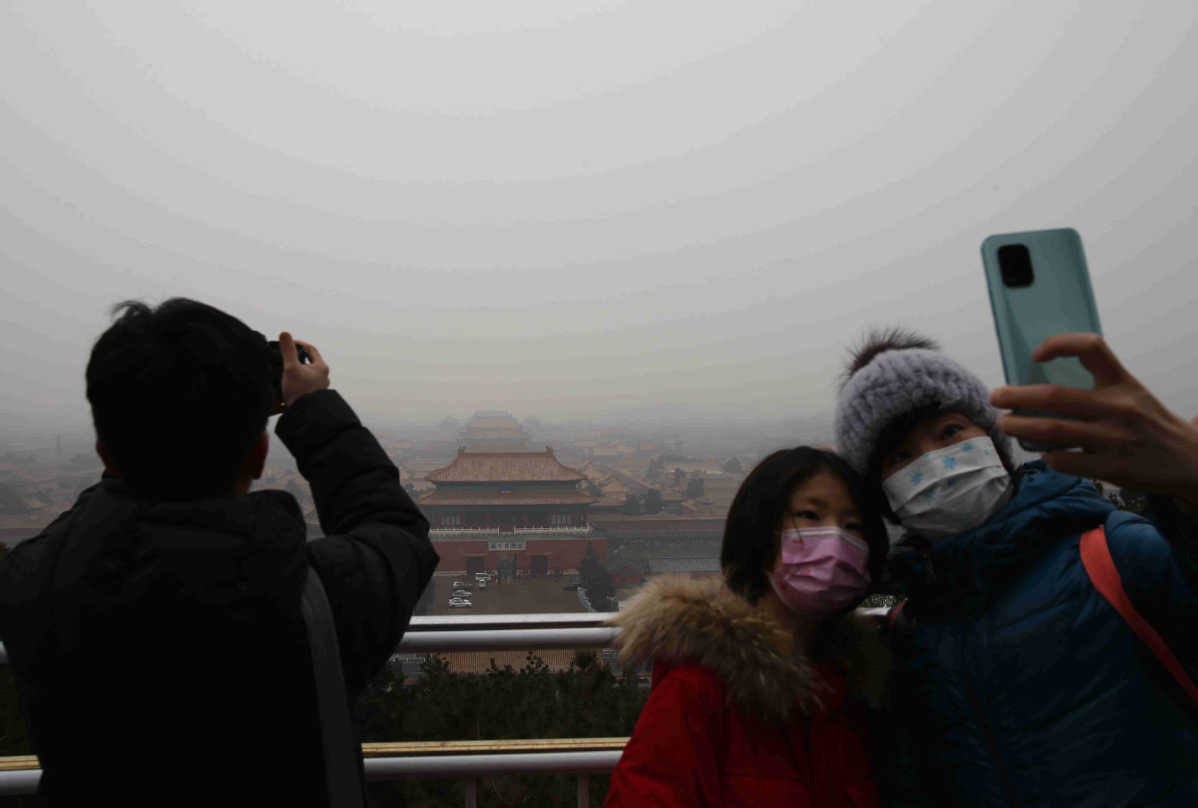 Tourists pose for photos with the Palace Museum in Beijing in the background amid heavy smog, on Jan 25, 2021. [Photo/IC]

Heavy smog is forecast to envelop North and Central China until Saturday due to poor weather conditions, the National Meteorological Center said on Monday.

From Monday through Wednesday, heavy air pollution will continue to hit Hebei, Henan and Shandong provinces, the center said.

Starting from Thursday, a stronger cold front will sweep from north to south and disperse the air pollution. However, smog may return over the coming weekend.

Since Jan 20, the Beijing-Tianjin-Hebei cluster, the Fenhe-Weihe Plain region and the Yangtze River Delta region have experienced heavy air pollution.

"Melted snow that generated water vapor in the air led to a high humidity in these areas, which also inhibited the dispersal of air pollution," it said.

"For example, since Friday, Shandong province had experienced heavy fog with visibility of less than 200 meters, which accelerated the rise of PM 2.5 density."

It said the latest round of pollution was due primarily to emissions from diesel vehicles, industrial plants and coal burning.

On Sunday, the Beijing municipal government triggered a yellow air pollution warning, the lowest level in a three-tier warning system.

Under the warning, local authorities are required to take preventive measures, including enhancing supervision of the environment around construction sites, suspending outdoor activities for students and reducing or suspending production of some enterprises.

Jining in Shandong province raised its orange warning to red on Sunday night and triggered its emergency response plan to reduce gas emissions and warn its citizens of the situation.

A draft guideline released on Sunday by Beijing's municipal government said it will fundamentally eliminate days with heavy air pollution by 2025 by gradually phasing out diesel vehicles and promoting new energy ones.

Since 2014, the average density of PM2.5 — fine particulate matter with a diameter of less than 2.5 micrometers — has decreased by 39 percent in the Beijing-Tianjin-Hebei cluster and surrounding areas. In the Yangtze River Delta region, it has fallen 43 percent, according to the research center's report.