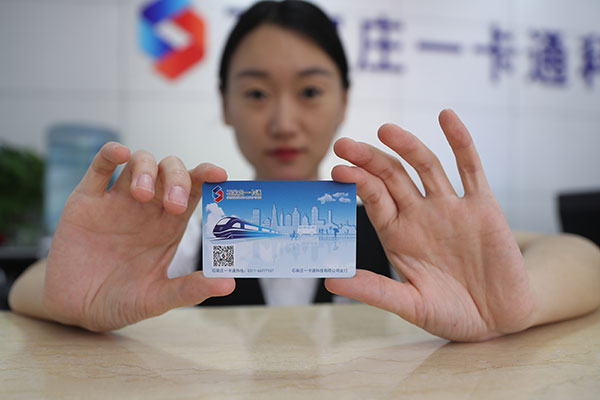 A new transit card, which is designed for use on all bus and subway systems in Beijing, Tianjin and all 11 cities in Hebei, is issued in Shijiazhuang, Hebei province, on June 4, 2018. (Photo/Xinhua)

A new transit card that works on public transport in 190 Chinese cities was issued on June 4 in Shijiazhuang, capital of northern China’s Hebei province.

The Beijing-Tianjin-Hebei Interoperability Card is designed for use on all bus and subway systems in Beijing, Tianjin and all 11 cities in Hebei, aiming to provide convenience for passengers and better regional integration. Beijing and Tianjin have also issued such cards. They can also be used in cities that have joined a nationwide traffic pass union, which had 190 members in 2017 and will be expanded to more than 220 cities by the end of this year, said Li Yang, deputy manager of State-owned Shijiazhuang Smart Card Science and Technology Co, which issued the latest card.

Passengers with the card can enjoy the same discount policies as local citizens when taking public transport in a certain city, Li said. “The card can spare the trouble of buying new transit cards or tickets when a person goes to another city,” Li said.

Wang Yuling, an official from the Hebei Development and Reform Commission’s Beijing-Tianjin-Hebei integrated development office, said coordination of regional development in recent years has driven a growing number of business people and workers to travel between Beijing, Tianjin and cities in Hebei.

“Easy payment methods for public transport can make business trips more convenient and save time, thus encouraging people to be more actively involved in and make contributions to the coordinated development of the region,” Wang said.

Xiao Ya, a regional manager at a recruitment company in Shijiazhuang, said she is always on business trips to different cities in China, especially to Beijing and Tianjin, and used to carry different cards in her purse for buses or subways. “Each time, before I left for a business trip, I had to find and take the exact traffic card of my destination city,” Xiao said. “Now I just need one card no matter where I go.”

The card will be sold only in Shijiazhuang, but it can be recharged in other cities where it works and will be rechargeable online in the future.

Many cities in the union have issued such cards. More than 13 million cards that can be used in different cities have been sold, a Ministry of Transport spokesman said in March.

The ministry aims to expand the union to cover public transport in rural areas by 2020.