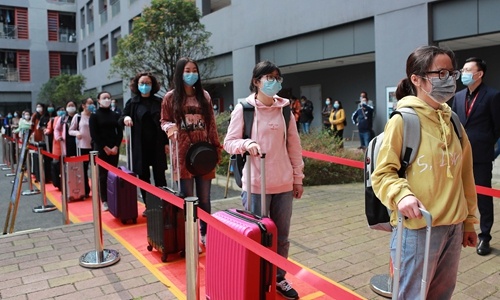 Students line up at a dormitory before getting disinfected at Guizhou University in Southwest China’s Guizhou Province on March 27, 2020. It is a drill, including having meals at the cafeteria and attending classes, taken by students to prepare for going back to school after the COVID-19 outbreak. (Photo: Agencies)

A college in North China’s Hebei Province recently aroused public anger and debate over a trial management system to observe and record whether students are in their dormitories.

According to the photos of the system that have spread on Chinese social media, there is a big screen showing the information about students who leave their dorms, including their names, photos and the time when they left.

This system has enraged many netizens, who criticized the college for violating the privacy of the students. “What’s the point of the school monitoring when students leave their dorms?” a Weibo user wrote on Tuesday. “It is a campus not a prison.”

The Qinhuangdao Vocational and Technical College told the Global Times on Tuesday that the system is intended to strengthen the safety management for student dorms. Even though it is recorded, students won’t be punished for leaving dorms at an “inappropriate time,” said a member of the college’s information center, which participated in installing the system.

The staffer didn’t explain when it would be inappropriate to leave the dorm.

The college’s students seemed reluctant to discuss the system. Among a dozen students whom the Global Times tried to reach via Weibo on Tuesday, only one replied. “I refuse to comment,” the student said, adding that the spread of the controversial photos had caused a negative impact for the college.

It is improper for the college to install this system, legal experts said. The college might be violating students’ personal information, said lawyer and Certified Information Security Professional (CISP) license holder Shi Yuhang.

Netizens were angry that the photos showed the system labelled the behavior as “illegal departure from dormitory.” One user wrote on Weibo, “I don’t understand which laws I shall break by going to the neighboring dorm and talking to the guys there.”

"Obviously, there’s no law against leaving your dorm or going to another dorm,” Shi told the Global Times, saying that the college is also suspected of violating students’ right of reputation by labeling this behavior as “illegal.”

In response, the information center staffer told the Global Times that the system is still being tested and hasn’t been put into use. “The ‘illegal’ label may just be a [bug in] the computer language,” he said.