CHINA Hebei protects environment even at cost of GDP: official

Hebei protects environment even at cost of GDP: official 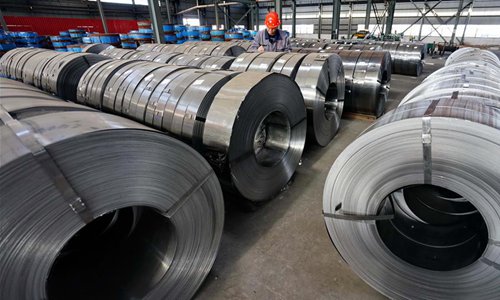 A worker is seen at a workshop of a steel manufacturer in Xinjuntun Township of Fengrun District in Tangshan City, north China's Hebei Province, May 5, 2019. (Photo: Xinhua)

Excessive industrial capacity in North China's Hebei Province must be cut to "guarantee the blue sky and white clouds of Beijing even at the sacrifice of (Hebei's) GDP," a Hebei senior official said at a press conference on Tuesday. "Hebei's energy structure is not very rational. In particular, there's quite a lot of excess steel capacity in Hebei. We must be resolute in removing this excess capacity, voluntarily regulate the energy structure and speed up economic restructuring," Wang Dongfeng, secretary of the Hebei Provincial Party Committee, said. As a hub of heavy industry in China, Hebei is often blamed for causing pollution not only within the province, but also in surrounding regions, especially Beijing. According to Wang, Hebei plans to cut another 14 million tons of excess steel capacity both in 2019 and 2020, and the province's overall steel capacity will be below 200 million tons by the end of 2020.Hebei also plans to cut 1 million tons of cement capacity and 10 million tons of coal capacity in 2019, according to an air pollution management work program launched earlier. As a result of joint environmental pollution controls in Beijing, Tianjin and Hebei, Hebei's environmental pollution situation has eased. In 2018, Hebei's average density of PM 2.5, an important indicator of air pollution, was 56 micrograms, down 14 percent year-on-year and down 48 percent compared with 2013, Wang said. "For one thing, we are managing air quality to keep the blue sky and white clouds. For another, we are planting trees to improve the ecology and managing water quality," Wang said. "Nowadays if people take a train or bus to Hebei, they will find that Hebei is covered in green everywhere." In recent years, the Chinese government has changed its pursuit of fast GDP growth to sustainable, green growth. This is pushing many local governments to put environmental protection on their priority lists. A Tianjin government official said recently that Tianjin has shut down more than 20,000 polluting facilities that would have contributed "hundreds of billions of yuan" to local GDP, with the intention to stick to high-quality development, according to a report by the Beijing Youth Daily in March.