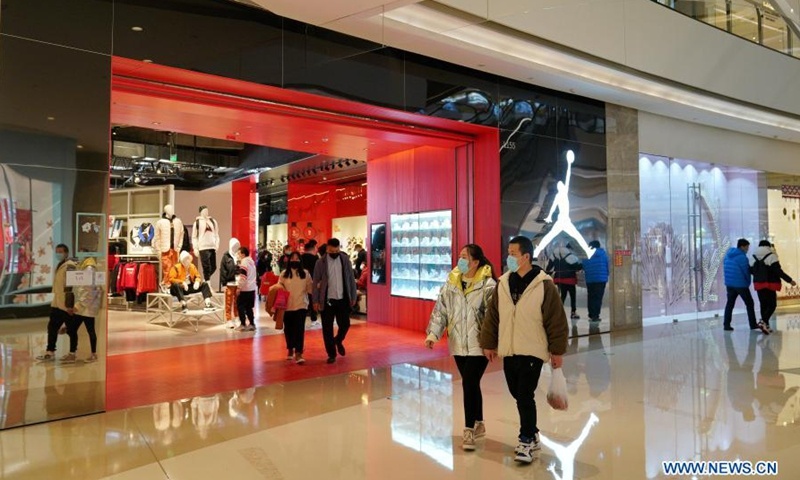 Customers are seen at a shopping mall in Qiaoxi District of Shijiazhuang, north China's Hebei Province, Feb. 5, 2021. Many commercial complexes and shopping malls in Shijiazhuang resumed operation in an orderly manner on Friday. (Photo:Xinhua)

The two sessions of North China’s Hebei Province kicked off in Shijiazhuang on Friday, along with the resumption of the city’s metro operation on the same day after over 40 days of suspension due to the latest wave of COVID-19.

Some residents of Shijiazhuang, the provincial capital, told the Global Times that hosting the provincial two sessions reflects the efforts made by the whole city in combating the virus.

Shijiazhuang announced on January 29 that residential communities and villages with no COVID-19 cases in the city can resume social activities and industrial enterprises can resume production, marking an end of the lockdown due to the COVID-19 flare-up. Buses and taxis are also resuming services.

On February 8, two days ahead of the Spring Festival holiday, Shijiazhuang resumed its train service, after a 34-day suspension.

A member of staff at Shijiazhuang Metro surnamed Zhao told the Global Times on Friday that more than 4,000 Metro staff had completed nucleic acid tests by Thursday to prepare for the resumption. “I am very happy to be able to meet my colleagues and work together with them,” Zhao said.

Traffic controls on the expressway are also being relaxed, and vehicles can drive in and out of the city under certain conditions, according to staff at an expressway intersection. People driving to Shijiazhuang from low-risk areas need to hold a green health code, while those from medium-risk areas must have a negative nucleic acid test certificate valid within 7 days, the staff told the Global Times on Friday.

People leaving Shijiazhuang by car also need to have negative nucleic acid test certificates. During the recent outbreak, some routes in and out of the city were closed.

From February 5, five days before the Spring Festival holiday, many commercial complexes and shopping malls in the city resumed operation.

“As delivery services were suspended due to the flare-up, many people rushed to malls to do their shopping as the lockdown ended just before Spring Festival,” Sarah Liu, a resident in Yuhua district, told the Global Times. “I go out less now but buy more things each time.”

So far, entertainment services including cinemas in the city are still suspended, and dine-in service in restaurants is still not available, the Global Times learned from local residents.

As the city returns to normality, many residents are appealing for delivery services to the city to resume so that online consumption can start again. “Orders to Shijiazhuang on most shopping platforms are still suspended, although parcel deliveries have begun,” Zhao told the Global Times.

Gaocheng district in the city, the epicenter of the latest resurgence, has downgraded its emergency response level in two regions from high to medium, the local government announced on Friday.