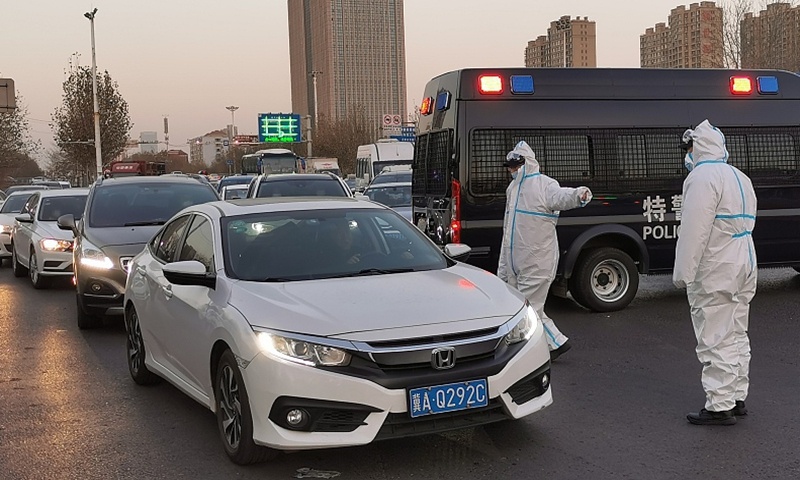 Hebei Province announced on Wednesday to control 10 highways that connect Shijiazhuang in Hebei to the capital Beijing, and to other adjacent provinces amid virus resurgence. (Photo: VCG)

One night after announcing it was entering "wartime mode," North China's Hebei Province, which neighbors Chinese capital Beijing, began putting in place various COVID-19 prevention measures on Wednesday amid a sudden spike in infections, including controls on highways passing through Hebei leading to Beijing and other provinces, the suspension of inter-city bus services, and raising the whole of Gaocheng district in provincial capital Shijiazhuang to high-risk area.

Hebei Province reported 20 new confirmed COVID-19 cases and 43 asymptomatic cases on Tuesday, making it the place with the most daily newly added cases in China. It currently has the only high-risk area in the country - Shijiazhuang's Gaocheng district - and three medium-risk areas - three residential communities in Nangongshi of the city of Xingtai.

Hebei announced on Wednesday that it was implementing controls on 10 highways that connect the provincial capital Shijiazhuang with Beijing and other adjacent provinces. Traffic police are urging vehicles from both sides to return on the highways.

The Long-Distance Bus Transit Station of Shijiazhuang also announced Wednesday it was suspending operations due to the COVID-19 flare-up.

As of 9:40 am, nearly 30 percent of inbound flights to Shijiazhuang had been cancelled, data from information provider VariFlight showed.

China's National Health Commission (NHC) has sent officials to Hebei to guide the epidemic control efforts. Shijiazhuang has started nucleic acid testing for all personnel in the cold-chain food industry.

The situation in Hebei is still in the development stage, and the epidemic prevention and control situation is severe, NHC director Ma Xiaowei said at a meeting with local officials on Tuesday.

Ma said they will strive to complete testing of all personnel in cities experiencing COVID-19 flare-ups within three to four days, and identify the infection chain as soon as possible to curb the further spread of the coronavirus.

Beijing Party chief Cai Qi said on Tuesday that management and control of travel from Hebei to Beijing will be strengthened to ensure the safety of the capital.

On Wednesday, Beijing health authorities also reminded people who have lived or traveled in high-risk areas such as Shijiazhuang and Xingtai since December 10 to report to their community and their workplace immediately, and follow the necessary epidemic control measures.

Hebei announced it was entering "wartime" mode on Tuesday night after 19 confirmed and 40 asymptomatic cases were found in Shijiazhuang and Xingtai since Saturday.

The coronavirus strain of newly confirmed COVID-19 cases in Hebei has been determined to be an imported one, very likely from Europe, Feng Zijian, Chinese CDC deputy director, said at a press conference on Tuesday night. The throat swab sample of the first newly confirmed COVID-19 case has been sent to the Chinese national CDC for virus gene sequencing, which will trace the source of infection as soon as possible.

The Global Times has learned that Nangongshi in Xingtai has put in place closed-off management measures. Other places in Xingtai are also strengthening prevention measures but currently have not asked all residents to remain home. Schools began as usual and factories asked all their workers to wear masks and had their temperatures taken frequently.

An official surnamed Hu from Xingtai told the Global Times that some residential communities in Xingtai have taken temporary closed-off management measures to take nucleic acid tests. "Things may return to normalcy after the mass nucleic acid tests in three days."

"The current situation is tense, as staff turnover within the province is high… some residents seemed to be worried and are waiting at home for the nucleic acid tests," Hu said.

Residents from Shijiazhuang confirmed with the Global Times that they have been notified by residential communities that the closed-off management will last for three days and many people have been stocking up on food in preparation.

Some residents reached by the Global Times do not seem too worried about the current situation, saying that except for not being able to go outside, everything remains normal and things might be brought under control again after the mass nucleic acid tests.