CHINA Hebei tourist sites up and running for 2022

Hebei tourist sites up and running for 2022

Deftly collecting the baton from his teammate, Zhao Haiqing rapidly began running from Horse Village, a local hotel and an exchange point along a race route in Zhangbei county, Zhangjiakou, Hebei province. He was keen to waste no time because there was still more than 140 kilometers for his team to complete.

This was the scene on Aug 29 during a grueling relay race with over a dozen sections, each traversed by a runner from each team as their teammates traveled by car, took a rest and prepared to take on the next section.

Wearing sunglasses and a sun hat, the 39-year-old set off at speed with the aim of finishing the 8.2 km leg, which ended at the Xitan village exchange point, as soon as possible.

After taking the baton－not a short stick but a running arm band containing a GPS device and a timing chip－Zhao promptly strapped it to his left arm as his teammate at the handover point receded into the distance.

"I was all prepared and at full strength for my first section," he says, adding that he was so excited for the special relay race.

Starting in 2015, Zhao has participated in many different running races nationwide, including marathons and cross-country races. "This is the first time I've run such a long distance in cooperation with team members and a car," he says.

The route is all open air and covers 141.6 km over natural terrain, crossing Zhangbei county, Chongli district and Shangyi county in Zhangjiakou.

"I anticipated that the course would have some roads with a steep incline, but it still surprised me and gave me a hard time," Zhao says.

"Running the steep sections in Zhangjiakou was too hard, making me tired at the very beginning," he says. Among the three legs he was scheduled to run, which totaled 23.9 km, there was one steep section that lasted more than 2 km. "We should have slowed down on those roads to keep our energy for the long run ahead."

He regulated his breathing and slowed down immediately after he found himself tired and gasping for breath on the steep incline. 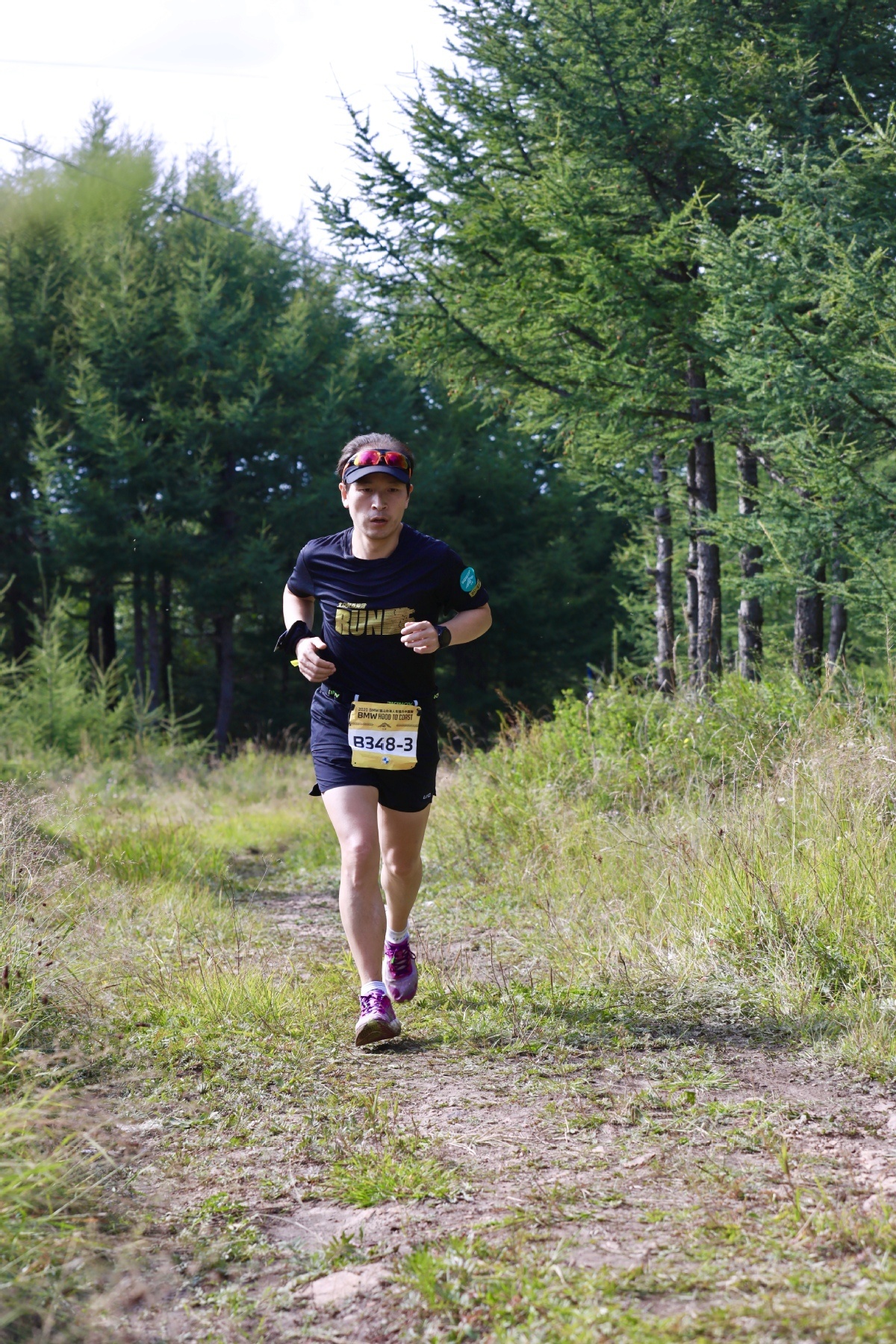 Zhao's team, which had five members including one woman, had other challenges awaiting them. The altitude at some areas along the route is around 1,400 meters, much higher than that of the plains. "It made my heart rate speed up and get much faster while running," Zhao says.

They finished the whole course in about 11 hours after starting off at 7:50 am on Aug 29.

Even though there were challenges and unexpected difficulties during the race, Zhao says he will definitely register for the race next year.

The race, the Hood to Coast China Relay, is a major annual draw for running enthusiasts and has been held four times since 2017 in Zhangjiakou.

"It's the charm of the race－to encounter unforeseen challenges, overcome them and become more capable distance runners－that's what attracts me," Zhao says. The endurance enthusiast believes that he has improved his strength and stamina due to the race.

What's more, there's another reason why he still wants to come again. "It's all natural. The scenery along the route is beautiful and the weather is comfortable, " he says.

Zhao spent his down time in the car feasting his eyes on the view along the route.

"The temperature is very cool and suitable for running, " Zhao says, adding that there was no need to worry about sunstroke when out on the course. "The air is also very clean, making you want to go out and start running!"

The city boasted the best air quality in Hebei with an average concentration of PM 2.5－a major air pollutant that contributes to poor air quality－of 25 micrograms per cubic meter last year, which is common for Zhangjiakou, according to Hebei Province Ecology and Environment Department and the city's corresponding bureau.

Tourists from neighboring cities, like Beijing, Tianjin and other cities in Hebei, usually choose to take leisurely road trips along Caoyuan Tianlu (grassy road to paradise), a scenic road linking prairies that run across several counties in Zhangjiakou. Stretching over 300 km, it has attracted many sightseers in recent years.

Part of Zhang's running route took place along Caoyuan Tianlu. "I think it's the major reason why a long-distance running race is hosted here," Zhao posits.

As well as the race, various other outdoor activities, including mountain biking, hiking, go-karting and music festivals, are also popular with summer travelers in Zhangjiakou.

The Midi Music Festival was staged in Chongli district in August. It was the first large-scale live music event held in the country since the COVID-19 outbreak.

Chongli district was chosen to hold the outdoor festival not only due to its cool weather and clean air, but also because it will play host to most of the snow events during the 2022 Winter Olympic Games with Zhangjiakou being a co-host city.

As for tourism, Chongli, once a county under the administration of Zhangjiakou, has topped the list of destinations in the city thanks to its starring role in the upcoming Games.

Since 2015, when Beijing and Zhangjiakou succeeded in their bid for the 2022 Winter Olympics, Chongli has gradually improved its skiing facilities and tourism infrastructure, such as hotels and transportation.

Zheng Yongyong, a ski enthusiast who lives in Beijing's Haidian district, goes to Chongli for skiing at least twice a month in winter. A oneway car journey would take him about four hours to get from his home in Beijing to Chongli's ski resorts.

However, since the end of last year, when a high-speed railway linking the capital with the district began operating, he has changed his transportation method. "It's more convenient because the journey only takes about an hour," he says.

It is skiers like Zheng that are the major tourists to the city during winter. During the snow season from November 2018 to April 2019, Chongli district received nearly three million visits, lifting its tourism income by 8 percent year-on-year to 2 billion yuan ($29 million), according to the district's tourism bureau.

"When you go to a local restaurant, you will find only two out of ten tables are local residents, and the rest are all tourists from outside," Zheng says.