The city of Hefei in eastern China's Anhui province is now home to several large national science and technology facilities, including a new grand research facility for fusion technology that is currently under construction. 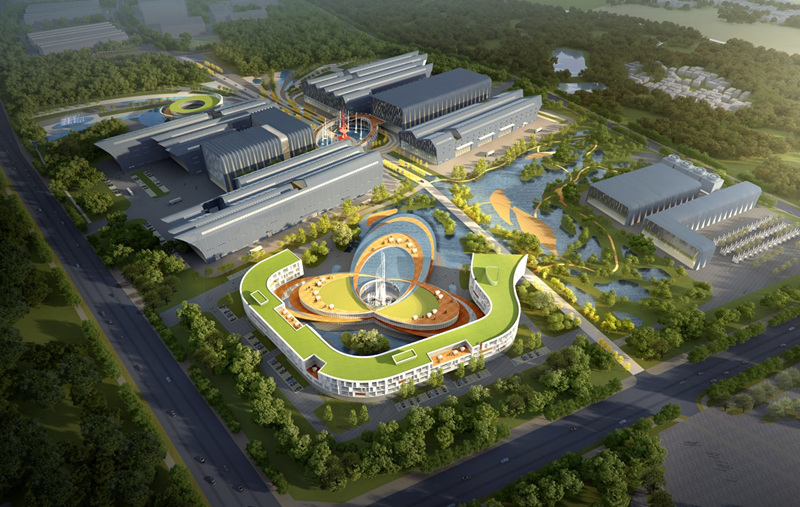 A concept image of the buildings and park of the Comprehensive Research Facility for Fusion Technology (CRAFT) located in Hefei, Anhui province. (Photo courtesy of the HFIPS)

China has made significant progress in magnetic confinement fusion over the past decade. With the successful operation of its nuclear fusion machine, the Experimental Advanced Superconducting Tokamak (EAST) since 2006 and headway in the International Thermonuclear Experimental Reactor (ITER) project, the country is achieving significant gains toward advanced steady-state operations and next steps in nuclear energy production.

The Chinese Fusion Engineering Testing Reactor (CFETR), complementing the ITER facility, initially aims to achieve fusion energy production of up to 200 MW and eventually reach DEMO relevant power level which is over 1 GW. DEMO, short for the DEMOnstration power plant, will be the ITER's successor and bring fusion energy research to the threshold of prototype fusion reactor capabilities; the first step before the human race can build a true commercial nuclear fusion power plant.

Subsequently, the engineering design of CFETR, including the magnet system, vacuum system, tritium breeding blanket, diverter, remote handling, and maintenance system has been carried out within the CFETR national design team. Significant progress has been made but tremendous challenges remain, as outlined by a guide and staff member of the Hefei Institute of Physical Science (HFIPS) during a tour by China.org.cn of the research facility's construction site.

The Comprehensive Research Facility for Fusion Technology (CRAF) is one of the country's biggest science and technology facilities and a large scale R&D project for CFETR. Its objectives are to explore and master fusion DEMO-level key technologies; establish standard methodologies for manufacturing key material, components, and systems for CFETR; build key prototype systems and RAMI (Reliability, Availability, Maintainability, and Inspectability) for CFETR; test and validate the methods, technology, and systems for successful construction of CFETR; and train the next generation of fusion scientists, engineers, and managers.

CRAFT, led by the HFIPS under the Chinese Academy of Sciences (CAS), consists of 20 different facilities that address most of the key technologies and systems of CFETR. The construction of CRAFT started on Sep. 20, 2019, and will last for approximately five years and eight months with joint funds from the central and local governments. In addition, the construction of CRAFT's ancillary park began in early December 2018 and will be completed in August 2021.

The project is one of the country's major mega-science facilities and was listed in the country's 13th Five-Year Plan for science and technology development.

"We told people that we are building an 'artificial sun,' but that is just a vivid metaphor for the general public to understand what we are doing — scientists don't call it that. What we are actually creating is something that can forever resolve human's energy problem," the guide explained. However, he added, the construction of CFETR is a huge project, and still far from completion. In order to realize it, they disassembled the 19 key system problems in CFETR to study them separately. This research facility is now what is known as CRAFT. 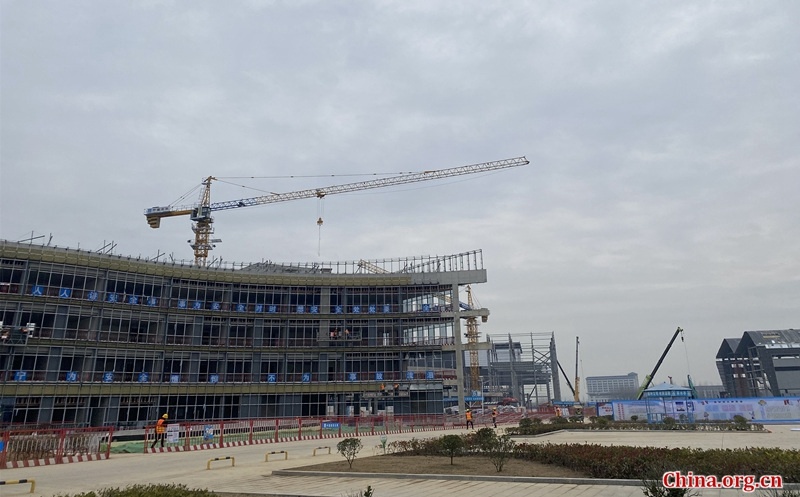 This photo shows the construction site of the ancillary park of the Comprehensive Research Facility for Fusion Technology (CRAFT) in Hefei, Anhui province, Dec. 18, 2020. (Photo: China.org.cn)

Currently, there are more than 300 scientists and engineers working together on the CRAFT project. CRAFT will not only use the technologies from ITER but also those which will need to be developed in future and likely pose significant challenges and efforts. Once completed, it will become a comprehensive research platform in the field of fusion with DEMO-relevant technologies. It will also provide a useful facility for related fusion technology to be used industry-wide.

Together with CFETR engineering design and EAST experiments, CRAFT will provide a solid technical base for the successful construction of CFETR in the future. Upon completion of the facility, it will provide a technical foundation for the development and construction of the core components for fusion reactors. It will therefore be of great significance for ensuring the advancement, safety, and reliability of China's fusion reactors and will greatly accelerate the actual application of fusion energy in the country. It will also provide research platforms for cutting-edge, cross-disciplinary fields like energy, information, health, and the environment for China and the world.

The HFIPS, located on a peninsula near Shushan Lake in the western suburbs of Hefei, capital of Anhui province, was founded in 2001 and is a large-scale integrative research base within the CAS. It has 10 scientific research units, including the Anhui Institute of Optics and Fine Mechanics, the Institute of Plasma Physics, the Institute of Solid State Physics, and the Hefei Institute of Intelligent Machines. Research spans scientific fields such as energy, environment, biology, material, and information development, with a focus on research of and technology needed for magnetic confinement fusion, advanced nuclear energy and nuclear safety, atmospheric environmental monitoring and detecting technology, the science and technology of magnetic fields, the effects of extreme environments on advanced materials, robotic and intelligent devices, modern agricultural technology, medical physics, and high technology.

The HFIPS currently has over 2,700 employees, of which more than 2,000 are scientific researchers and technicians, including over 300 high-level talents. A further 2,000 are master's or doctoral students.

Hefei is now home to more than 20 well-equipped national, provincial, and CAS key laboratories or research centers as well as over 10 technical physics experimental platforms. These include other major science facilities, namely, the EAST tokamak device and auxiliary heating systems and the Steady High Magnet Field Facility. Through years of hard work, the HFIPS has become a China-based world leader in nuclear fusion research.

Hosting major science and technology facilities is part of the city's rise. In recent years, Hefei has excelled in scientific and technological innovation and talent attraction. In the latest Nature Index 2020 Science Cities ranking published in September, Hefei ranked 20th among global cities. Since 2017, Hefei has also ranked in the top six "Amazing China: Most Attractive Chinese Cities for Foreigners" — a survey conducted by the Information and Research Center of the Foreign Talents of the State Administration of Foreign Experts Affairs — for three consecutive years. The city is also home to numerous high-tech companies, including iFlytek and BOE Technology Group as well as China Speech Valley, the first national industrial park to focus on artificial intelligence and intelligent speech.