CHINA Henan mounts full response to new round of heavy rain; precipitation will not be as 'extreme' as July storm: experts

Henan mounts full response to new round of heavy rain; precipitation will not be as 'extreme' as July storm: experts

Central China's Henan Province is fully on guard against a new round of heavy rainfall, one month after the province was hit by torrential rains and floods in July. At least three cities have suspended businesses and six cities have launched Level-II or Level-I emergency responses for floods. But experts said that the this round of precipitation will not be as "extreme" as the previous one in July. 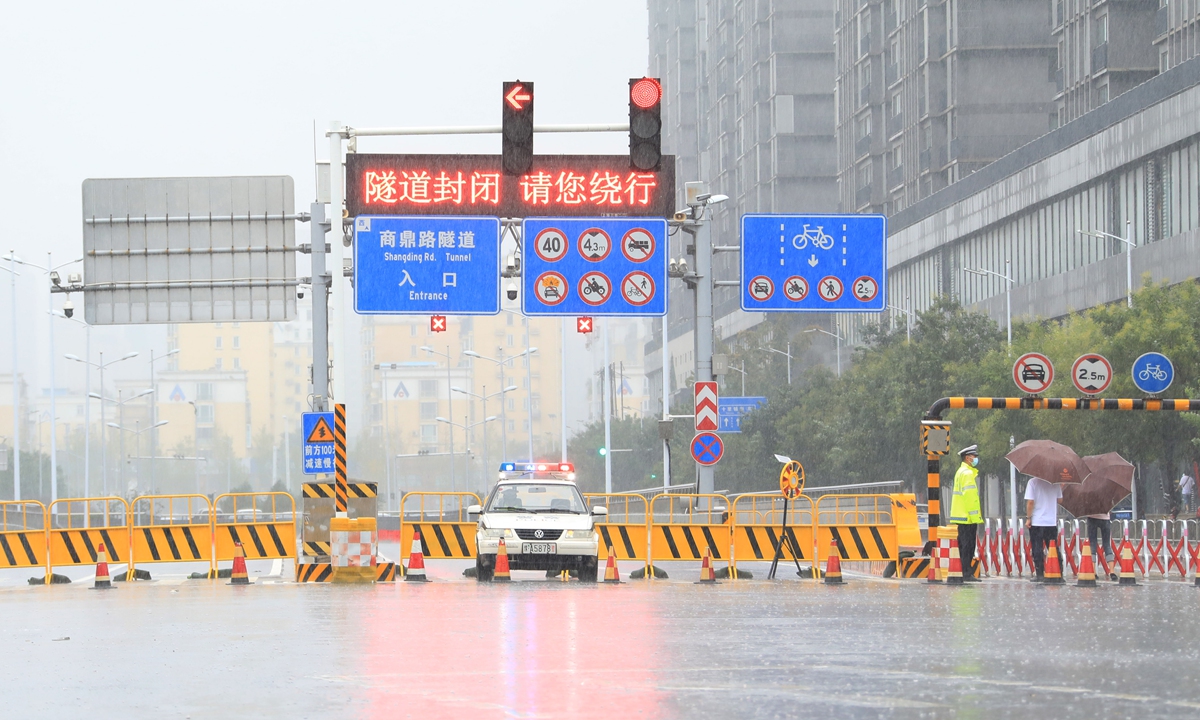 An underground tunnel in downtown Zhengzhou, Central China's Henan Province, is closed on Sunday due to heavy rain. (Photo: IC)

According to a notice that the Henan Meteorological Service posted on Saturday, the province would see regional heavy rain from Saturday night to Monday, and the main period of heavy rainfall would be on Sunday.

Henan's capital city Zhengzhou, as well as cities including Jiaozuo, Xinxiang and Kaifeng, will receive precipitation ranging from 250 to 400 millimeters. Strong convective flows and gusts are expected to generate gales or be up to level eight to 10 in some places in the northern and central eastern parts of the province.

The area of heavy rainfall this time overlaps with places that suffered floods in July, said the provincial meteorological authorities. But weather experts said that the new round of rainfall will be different from the previous one in late July in terms of intensity.

The total precipitation will not be as extreme as what was seen in July, as the rainfall process this time was mobile and would not remain stagnant in certain areas like in July, Zhang Tao, chief forecaster of the National Meteorological Center, told the media on Sunday.

But he said that the rainfall "may still have a very large and unfavorable impact on Henan," as the region hit by previous rain and floods has not fully recovered. Drainage systems for flood prevention and emergency response preparation are still needed, he said.

Cities including Xinzheng, Kaifeng and Zhengzhou suspended businesses and manufacturing starting from Saturday to guard against the rain.

After torrential rains and floods hit the province in late July and killed 302 people, citizens in Zhengzhou, one of the cities that was hardest hit by the rain then, have paid higher attention to the approaching rain this time.

A public letter issued by Zhengzhou flood control and drought relief headquarters said that "it will make all efforts to defend against the heavy rainstorm and suggested all citizens not go outside unless necessary."

Xinzheng, a city to the south of Zhenzhou, suspended businesses, schools, manufacturing and transportation from 6 pm Saturday to Monday at 12 am, while Kaifeng issued a similar notice to suspend all work in companies, scenic spots, construction sites, and stores along roads.

Zhengzhou's railway bureau suspended 59 passenger trains on Sunday and all bus service in the city was also stopped for two days from Sunday. As of 11 am Sunday, Zhengzhou had relocated 240,000 people due to the rain.

The posts showing the efforts being made by Zhengzhou citizens in full preparation against the upcoming rainfall have attracted widespread discussion and prayers from netizens on Chinese social platform Sina Weibo.

Citizens were seen parking their cars on overpasses to avoid floods. Local police said that they won't consider this as a parking violation, and they reminded car owners to drive away their cars after the rain.

The Beijing-Guangzhou Tunnel, which was overwhelmed in late July and claimed six lives, has been closed, according to local media. Workers were arranged to monitor the situation in the tunnel at night and prepare for pumping water.

Zhengzhou Police said on Weibo that traffic to all the 67 tunnels and 23 railway bridge culverts in the main urban area were banned from Sunday at noon.

Subway stations of Lines 3 and 5 in Zhengzhou have been equipped with waterproof aluminum baffles 50 to 60 centimeters high at entrances, and sand bags were piled up behind the baffles, reported The Paper on Friday.

A local resident surnamed Lü in Zhengzhou told the Global Times on Sunday that the property management staff in her community had put sandbags at the garage entrance on Saturday to prevent rain water from flowing into the garage.

Learning from the lessons in the previous rainfall, during when her home water supply was cut off for days, she said she has stored a lot of potable water this time.

"The rain has been getting heavier since Sunday at noon," she said, "but I'm less worried this time as I can see people around me have raised their awareness about the rain and news reports said that preparations have been made all over the city this time to prevent potential emergencies."