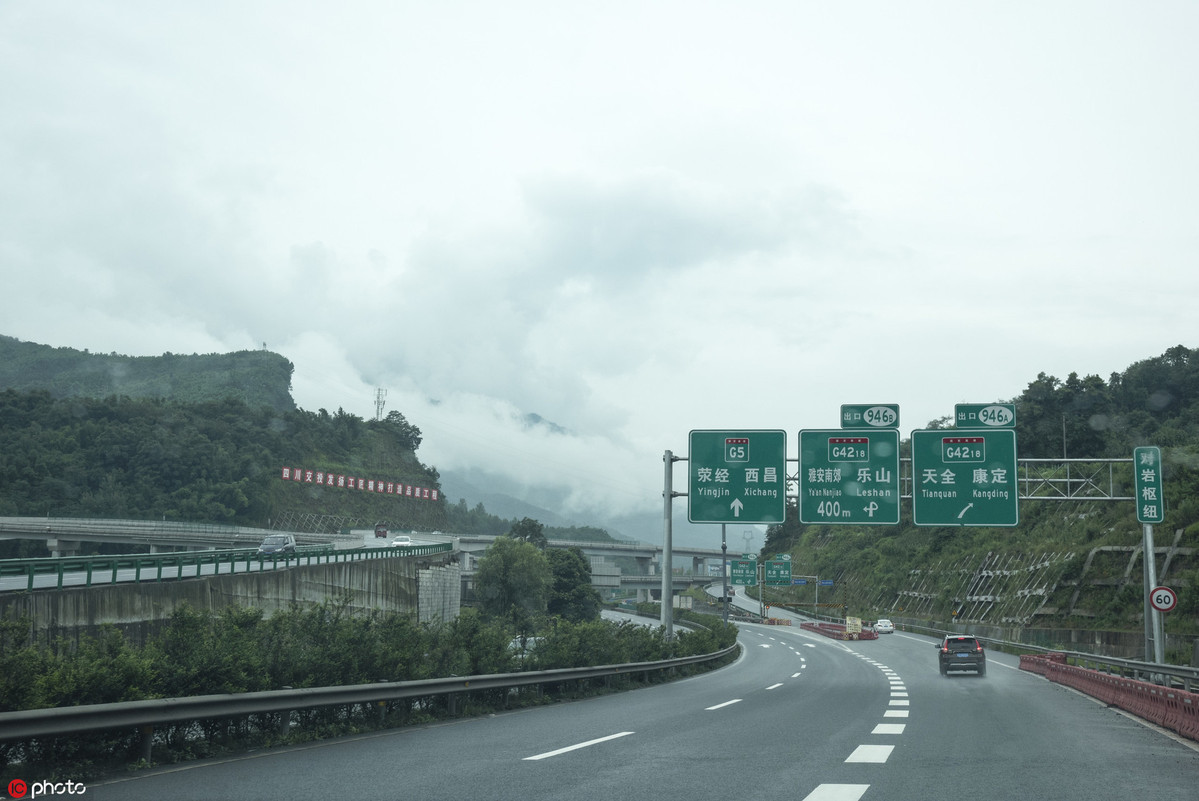 Low-hanging clouds in the distance float above the Yakang Expressway, on July 13, 2019. Running from the Sichuan Basin to the Qinghai-Tibet Plateau, the Yakang Expressway connects the mountainous region of Ganzi Tibetan autonomous prefecture in Southwest China's Sichuan province to the outside world. (Photo: IC)

CHENGDU－More than a decade ago, Loden, a herdsman in Ganzi Tibetan autonomous prefecture, Sichuan province, sold all 50 of his yaks to pay for his sick wife's medical treatment.

The sale left the family from Kahui village, set in the foothills of mountains in Litang county, penniless.

However, things began to turn around after their household was identified as poverty-stricken in 2014.

Loden received a notebook from the local government to record his poverty-reduction goals and progress toward achieving them.

The cadres in his village often came to his home to encourage him not to lose heart. They explained poverty alleviation policies to him and taught him how to apply for project funds.

Nibuzim, a doctor from the People's Hospital of Litang county who like many Tibetans goes by one name, also offered assistance to Loden's family. He helped them get access to medical resources and visited their home regularly to check on the health of Loden's wife.

Meanwhile, Kahui villagers developed a collective economy. In October 2014, the villagers set up a pasture through self-financing and government subsidies. Loden and his fellow villagers can now raise yaks and goats, grow grass or run hot-spring villas for tourists and receive dividends.

"Life can get better if you work hard," he said.

Loden's notebook has witnessed the life changes of his family over the years. It recorded the annual per capita income of the family of eight gradually climbing to 7,100 yuan ($1,005) last year from 3,000 yuan in 2015.

Such notebooks can be found in every poverty-stricken household in Loden's village. They record the improvements in living standards, healthcare and education.

Now, Loden's family has more than 40 yaks and has been allotted 127 hectares of pasture. They have also bought a new motorcycle.

Kahui plans to further transform the pasture and hot-spring villas to address the long-standing poverty of the village through cultural tourism, agriculture and animal husbandry.

Earlier this year, Loden's grandson injured his little finger and was unable to seek medical treatment due to the COVID-19 outbreak.

After learning this, Nibuzim, offered to help the family contact the hospital and send the child for treatment.

"Although we have been lifted out of poverty, the people who assisted us still care about us so much," Loden said.