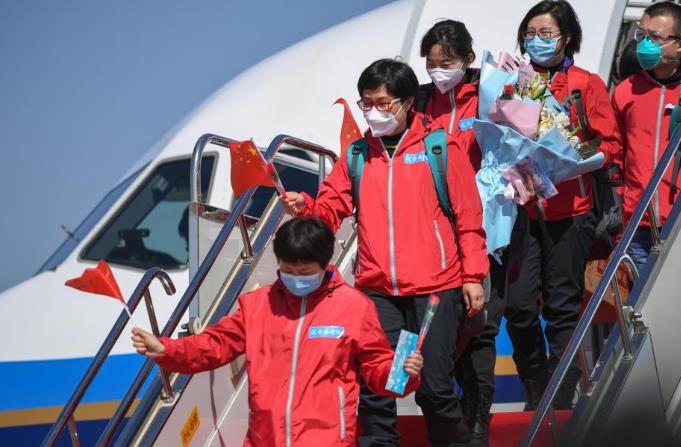 Ji Enyou spread out his drawings on the ground in the hotel parking lot, as the viewer on one of the hotel's balconies－a woman－waved and smiled through her tears.

Nine-year-old Ji is a third-grader in Northeast China's Liaoning province. The collection he had drawn was a surprise gift for his mother Zhou Meiduo, a head nurse from the Fushun City Hospital of Traditional Chinese Medicine who had been assigned to Wuhan, the former epicenter of the novel coronavirus.

As the pandemic has been basically contained in Wuhan, tens of thousands of medics sent there to help treat the infected patients are now heading home.

After Zhou left in early February, Ji often stared at the family photo that hung at the entrance of his home, sometimes touching the image of Zhou with his little fingers, according to Ji Lexin, his father.

"He was reluctant to admit that he missed his mother, but I often heard him calling 'mom' in his dreams at night," says the senior Ji, who then encouraged the boy to draw his mother on paper.

With the help of his father, the boy created one drawing each week, taking inspiration from either the photos Zhou had sent or what she had described over the phone.

He has drawn Zhou in uniform rushing to a plane, taking care of patients and guiding the patients in exercise. He also made a sketch of Zhou's work pass at the Leishenshan Hospital, a makeshift medical facility that was built in less than two weeks, where Zhou was on duty.

On Feb 14, his ninth birthday, Ji wrote his birthday wish on one of his drawings－"I hope the epidemic is defeated soon so that my mom will return".

On March 21, as many medics returned from Wuhan, Ji felt disappointed when he learned another 29 new patients were put under his mother's care.

He then wrote"29" as the hospital bed number in his drawing. He also asked his father what a normal electrocardiograph (ECG) looked like before drawing an ECG chart on the equipment behind his mother on the paper.

"Only if the patients recovered would my mother accomplish her job and return home," he says.

Ji's father, a doctor, said his wife decided to postpone their wedding 17 years ago when he was assigned to Beijing to join in the treatment of SARS patients.

"Now it's my turn to be supportive," he says, adding that no matter how busy he was, he would spare the time to help his son with the drawings.

In his latest work, the junior Ji drew the family of the three, with "welcome home" written on the T-shirts of him and his father. On the other side of the drawing was an airplane receiving a water-cannon salute, which he was told was a top honor to show the deepest gratitude to the returned medics.

He says his mother deserved the honor.

Ji's mother has to wait another 14 days under quarantine observation before she is able to hug her son.

"I'm sorry I wasn't around on your birthday. I promise I'll buy you a birthday present and take you to fly a kite," she told him over the phone.