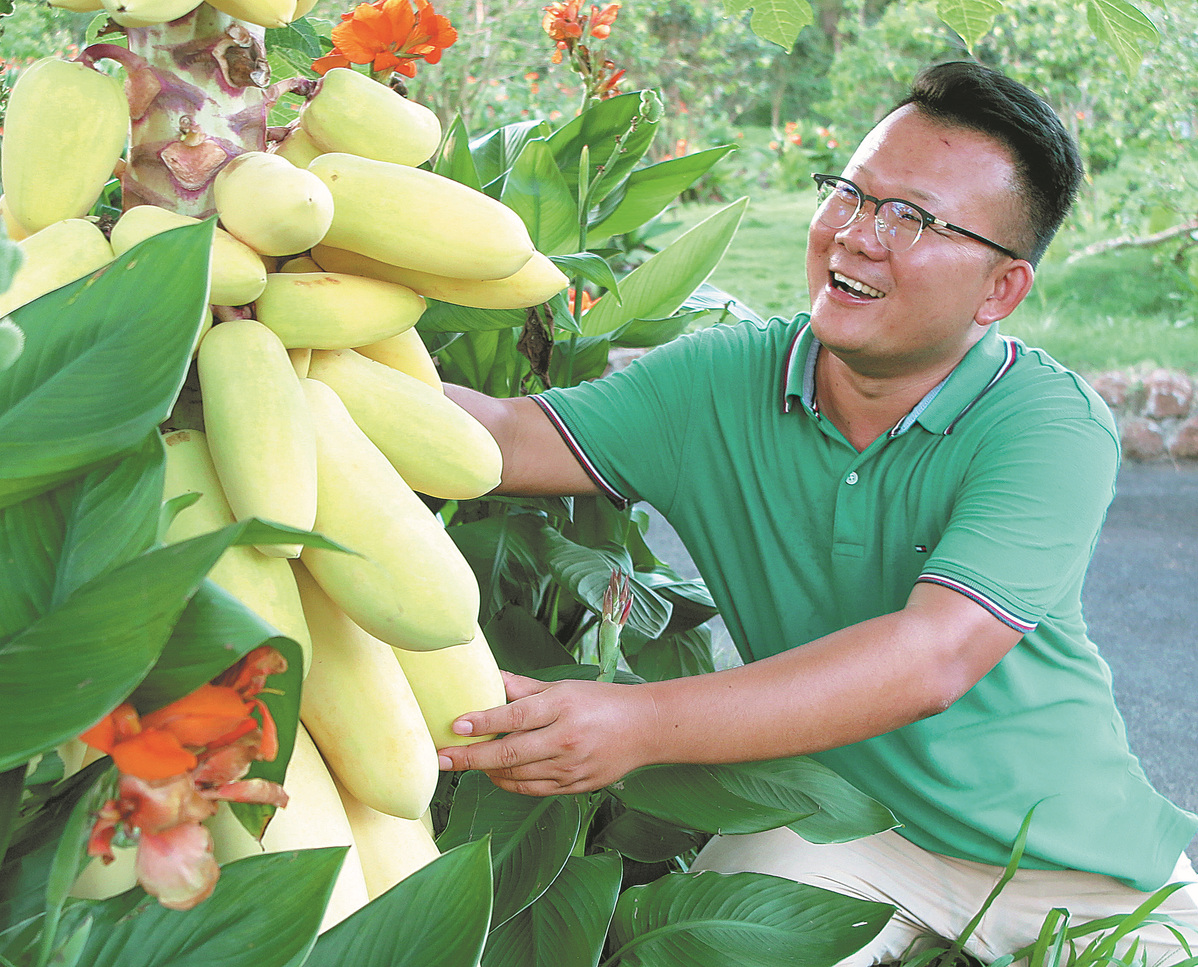 Filled with caviar-sized juice vesicles that can be yellow, red, purple or green, finger limes are regarded as the apex of the lemon family thanks to their unique aroma and taste.

It is native to Australia, but more of the thumb-like fruits are now being grown in Hainan province, improving the lives of local farmers.

Wang Qiao, who introduced the fruit to his hometown in 2016, was born into a family with a long history of growing tropical fruit in the town of Dalu in Qionghai, eastern Hainan. His passion for growing fruit kept drawing him back to his hometown from a promising career in a leading city.

With support from the local government, Wang leased about 66 hectares of rubber plantation and turned it into an orchard where he devoted himself to the research and introduction of tropical fruit trees from all over the world.

By building a "kingdom of exotic flowers and fruits", he hopes to enrich local villagers and help upgrade the varieties and quality of tropical fruits in Hainan.

"We have introduced more than 400 varieties from domestic universities, scientific research institutions and fruit seedling companies," Wang said, his sun-baked skin as red as the local selenium-rich soil. "We spent three years finding the finger lime breeds that are suitable for growing in Hainan from among 1,000 finger lime varieties."

He added that in the past two years, more than 4.5 million tropical fruit seedlings have been cultivated and promoted on 1,300 hectares of land across the tropical island.

"About 150 breeds, such as the yellow dragon fruit and finger lime have been successfully cultivated," Wang said, adding that demand for Hainan's tropical fruits, especially its finger limes, is high in leading markets such as Beijing and Shanghai, thanks to their high nutritional value, appealing colors and unique fragrance and taste, even though they sell for premium prices.

An official from the city's agricultural and rural affairs bureau said: "Europe has extremely high requirements for food safety. Being able to obtain the certification shows that finger limes planted in Qionghai have passed rigorous tests and are absolutely healthy and safe food."

Negotiations have also been held with companies from Japan, Australia and the United States eager to order finger limes from Hainan, the official added.

"I was employed two years ago to take care of the fruit trees at the orchard, earning 3,000 yuan a month," said Chen Xueying, a middle-aged woman who led a poverty-stricken life with an annual income less than 4,000 yuan several years ago.

"Working here is a great time, learning how to take care of the rare fruit trees, seeing them grow strong and tall and feasting my eyes on the rare and colorful fruits in close clusters."

Chen is one of 97 local workers at the orchard.

With support and guidance from the city and township governments, rural cooperatives have been established, with 106 poor households actively taking shares. Wang's company provides technical guidance and takes charge of sales while the rural cooperatives organize planting and harvesting of the fruit.

Wang said that in the next five years he plans to introduce more than 200 tropical fruit breeds from Central and North America, South America, Southeast Asia, Africa and South Pacific island countries, and upgrade the tropical fruit growing base into a leisure-tourism destination that immerses people in new experiences, a center that provides popular agricultural science demonstrations and talent-training, and a base for exploring fruit processing.

To expand further, the local blueprint includes across-the-board cooperation and exchanges with domestic and international organizations in breed classification and identification, research and development and gene modification of new breeds, seedling technologies and quality improvement, the standardization of supporting plantation technologies, transformation of technical achievements and the building of a cluster of demonstration bases.