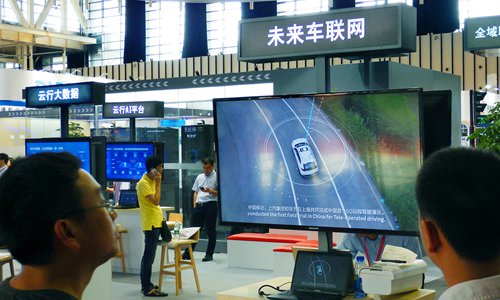 AI technology and big data, including facial recognition, drones and an robot driving coach are displayed at an exhibition in Nanjing, Jiangsu Province on August 10, 2018. (Photo: VCG)

Huang Wei's son sleeps every night with an AI robot developed by Huang. The young boy plays with it every morning when he wakes up, because Huang and his wife are both very busy. As the CEO of the Beijing-based artificial intelligence start-up Unisound, known in Chinese as Yunzhisheng, Huang said the idea of developing an AI robot for children came from his experience as a father. The robot helps children practice oral communication skills and teaches them Chinese poems. Huang's son now enjoys spending a great amount of time with it. China's State Council understands the significance of AI applications to decrease costs, empower economic growth and even bring transformation to industries in the coming era. The council revealed its ambition in July 2017 to develop an AI industry worth 1 trillion yuan ($145.7 billion) and become the world's leading AI innovation hub by 2030. The Chinese government is providing supportive policies and funding to the industry, encouraging a great number of start-ups in the field. AI is becoming a buzzword that attracts capital. Although media reports warns the AI industry is experiencing a bubble, experts told the Global Times that the market is cooling down and investors are more sober this year compared to 2016 and 2017, leaving the industry to develop in a normal way.

Why China?Searching "AI" on China's Eventbrite counterpart Huodongjia, 515 conferences turn up in the results. After the State Council announced the strategic plan in July 2017 to develop the industry, governments at all levels are striving to respond to the call. In addition to attracting top technology talent with enticing rewards, many cities are holding AI-related conferences for professionals, investors and media. Zhang Yicong, a senior analyst at financial data service provider Jingdata, told the Global Times that some second-tier cities hope to find opportunities to ascend to the first-tier, with the assistance of either innovative business models, or technology innovation. For instance, Hangzhou, a city in East China, is becoming a top-tier city because the headquarters of Chinese digital conglomerate Alibaba Group is located there, Zhang said. Transforming to "smart cities" with the assistance of AI can take those cities to the "fast lane," Zhang added, and officials in municipal governments are daring to take a risk on developing cutting-edge technology in order to gain achievements in their career records. "Smart cities" are designed to run more efficiently by using a big data network and AI system. About 500 cities have proposed "smart cities" strategies so far, the People's Daily reported on Tuesday. The craze for the city of the future comes from the huge market for AI. For example, China's great volume of data and vast use of CCTV cameras enable AI applications in the security field to flourish. Equipped with 20 million CCTV cameras, China now has the largest monitoring network in the world, according to Amazing China, a six-episode documentary co-produced by the Publicity Department of the Communist Party of China (CPC) Central Committee and China Central Television.Because of the great amount of data produced by the large population, as well as weak data regulation in the country, China is a promising market for industries that rely on facial recognition, Zhang said.Facial recognition is not only for maintaining social security. Zhejiang University also uses it to allow students to pay for meals at the cafeteria, news site thepaper.cn reported in February. The adoption of AI technologies in people's daily life could help bring stability to society and convenience to people, experts said.Huang said that at present, AI applications in the visual field have a large market share. He added that AI applications in the voice field have more development potential. Although the demand to maintain public security brings many orders to visual AI companies, Huang predicted there will be a glut in the market. "The government is 'paying the bill' for visual AI companies, but I don't think you can put a hundred cameras in one room," he said.

Less frothyA 2018 CB Insights study shows that the funding for China's AI start-ups surpassed that in the US for the first time in 2017. Some $15.2 billion went to AI start-ups last year and 48 percent of the funding was for Chinese firms. Liu Duo, president of the China Academy of Information and Communications Technology (CAICT), and also secretary general of the Artificial Intelligence Industry Alliance (AIIA), said at the China Artificial Intelligence Summit in Nanjing recently that according to incomplete statistics, there were 848 AI companies in China by 2017, which held a market size of 21.7 billion yuan. However, a large amount of capital going to AI industries may lead to an investment bubble that quickly collapses.Xiong Weiming, a partner of China Growth Capital, told news portal Jiemian recently that the AI industry is reminiscent of the Groupon craze in previous years. The vast herd of investors and government funds are very passionate, while first-tier investors are cautious. The success of leading AI companies has led to many start-ups following the trend. Huang said China has passed the worst period of AI bubbles. Even though some inflated values remain, the industry has tended to be more rational. He also said capable teams will run further and faster since AI is different from other industries: you cannot overtake others at a corner. Talking about whether China's AI industry is overheated, Andrew Ng, co-founder of Coursera, and former head of Baidu AI Group and Google Brain, told the Global Times that we cannot judge whether the industry is overheated or not since some start-ups have succeeded, and some have not. He mentioned Gartner's hype cycle, which suggests that AI technologies will become available to the masses - the so-called "democratized AI." Gartner's hype cycle represents how cutting-edge technology goes from conception to maturity and application.According to Gartner's 2018 hype cycle analysis, most AI-related technologies are at the high spot, which means high expectations are placed on the industry. Zhang said this is why AI seems to gain more fame than is warranted. Currently, AI helps companies decrease costs, but it seemingly lacks the ability to create something new.Ng believes that AI could empower business greatly if the companies choose a core field and specific technological barrier to overcome. He advised start-ups not to compete with AI giants such as Google or Baidu. Instead, he said developing an area in which the companies specialize in is more important. Talent shortageThe deciding factor in the AI competition between China and the US will be talented people.In addition to government funding to firms, China is now attracting more AI talent to work in the country with decent pay and good benefits, such as housing and bonuses. For example, national schemes like the Thousand Talents Plan and the Yangtze River Scholar Award are both attracting AI talent. In April, the Ministry of Education released an AI innovation action plan for universities to train more talent to respond to the 2030 goal, encouraging more AI teaching and research in universities and research institutes. Ng encouraged more education in the AI field and applauded China for doing a good job. He also proposed that more online AI resources could be offered to talent both in the US and China. This could help train skilled workers for the whole AI industry. Xu Tao, director of the International Cooperation and Exchanges Department at the Ministry of Education, told the China Daily in April that 10 Chinese universities have set up AI-related majors. And the ministry said in March that 283 universities are licensed to offer data science programs. In July, 26 universities applied jointly for setting up AI majors in undergraduate education, making it easier for younger Chinese students to study AI.