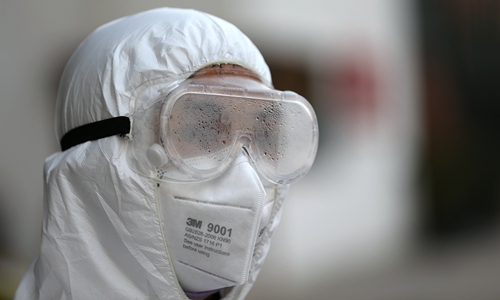 A patient in Beijing was recently diagnosed with the novel coronavirus pneumonia on the basis of a lower respiratory tract sample after having undergone three negative pharynx swabs tests, raising a serious alarm, on the management of discharged patients, the Beijing News reported Saturday, citing experts.

Chinese netizens show visible qualms about the reliability of pharynx swab nucleic acid tests and the chances of the epidemic contamination by discharged patients.

"Discharged patients who show negative in pharynx swab may still be infected with the novel coronavirus, which we all cannot realize," commented a user on China's Twitter-like Sina Weibo.

A patient with fever from Wuhan in Central China's Hubei Province, the epicenter of the novel coronavirus pneumonia (NCP), was confirmed with NCP infection in the respiratory department of China-Japan Friendship Hospital in Beijing on February 5.

The Beijing News confirmed this case with related health departments, as reported on Saturday.

Suspected patients normally take pharynx swab nucleic acid test twice, and infection is likely to be determined with one positive diagnosis. If there are two negative tests, suspected patients can be cleared off infection suspicion, a doctor from the respiratory department of a top hospital in Beijing told the Beijing News.

Three negative pharynx swabs for the nucleic acid test of NCP indicate the virus is highly occult, he added.

"The lesions occur in the lungs, the lower respiratory tract, and sometimes not in the upper respiratory throat," Ding Xinmin, chief physician in the department of respiratory medicine at the Beijing Shijitan Hospital, explained to the Beijing News,adding that owing to such intricacies the case was confirmed positive only after alveolar lavage test.

It is now difficult to carry out a sample test of the lower respiratory tract for every suspected patient, which also poses certain challenges to the diagnosis, Ding noted.

However, he said this case was an isolated one and the general public should enhance personal protection during the outbreak rather than getting in panic. In addition, attention should be paid to the diagnosis and management of discharged patients.