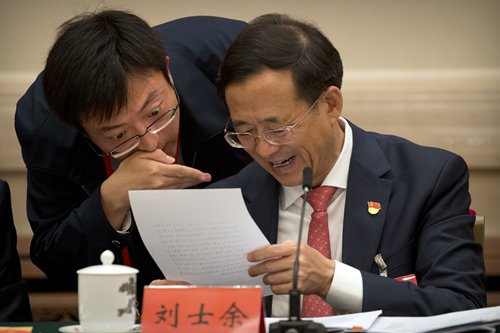 A member of staff hands a document to Liu Shiyu, chairman of the China Securities Regulatory Commission, at a group discussion of China's financial system held on the sidelines of the 19th National Congress of the Communist Party of China in 2017. (Photo: IC)

A high-profile corruption case involving the former head of China's securities watchdog boosted confidence in the country's financial markets, as the top leadership showed its determination in the anti-corruption campaign despite mounting economic challenges and a crackdown campaign in the financial market could follow, analysts said on Monday.Though the news of the case  of Liu Shiyu, former chairman of the China Securities Regulatory Commission (CSRC), came at a sensitive time when investors are skittish over an escalating trade war between China and the US, mainland stocks reacted relatively calm to what could have been a serious blow.Despite the negative news, the Shanghai Composite Index closed only 0.41 percent lower, while the Shenzhen Component Index lost 0.93 percent."It could have been much worse, if it weren't for the solid economic fundamentals," Li Daxiao, chief economist at Shenzhen-based Yingda Securities, told the Global Times on Monday. "Right now, there is just too much negative news for investors."China is locked in a trade and technology battle with the US, while also battling persistent downward pressure at home. Still, the Chinese economy has shown surprisingly strong resilience so far, growing at a better-than-expected rate of 6.4 percent in first quarter.Liu, who stepped down from his CSRC post in January, is under investigation for possibly violating laws and disciplinary rules after he turned himself in, according to a statement from the Central Commission for Discipline Inspection on Sunday night.Though many details of the case remain elusive, it has prompted speculation that a shockwave might hit the financial market, particularly programs and other matters Liu touched on during his nearly three-year tenure at the CSRC. Liu was known for his efforts to speed up the initial public offering applications process, which, as some pointed out, benefited several commercial banks from his hometown in East China's Jiangsu Province,  some media reported.Though the news came as a surprise, it also reflected China's determination to deepen its anti-corruption drive and carry forward reforms in the domestic financial markets, even as pressure persists, analysts said. Liu's case might also signal that a crackdown against wrongdoings in the financial market could come, as part of broad efforts to stabilize the market, they noted."I think the biggest takeaway from this is that China will continue on its own path regardless of domestic and foreign pressure," Li said. "So in that sense, this is a boost to market confidence."Liu's move followed Qin Guangrong, former Party chief of Southwest China's Yunnan Province, who was also reported to voluntarily turned himself earlier this month.Such a trend of more officials choosing to turn themselves in  voluntarily shows the rising deterrent strength of China's anti-corruption campaign, and  China's "institutional anti-corruption mechanism has further deepened," said Zhi Zhenfeng, a legal expert from Chinese Academy of Social Sciences in Beijing.