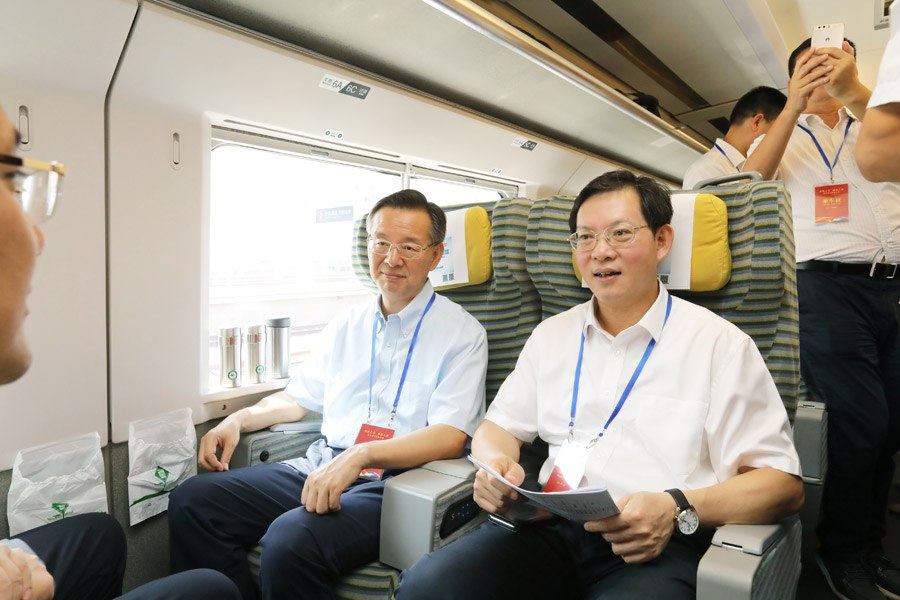 The long-awaited high-speed rail link to Zhanjiang - the Jiangmen-Zhanjiang Railway - was met with universal acclaim during a trial run for the public last Saturday. Officials said it looks set to provide the coastal city in Southern China's Guangdong province with a hefty economic boost.

The addition of the high-speed rail line is expected to narrow the economic gap between Zhanjiang and heavyweight cities in Guangdong province such as Guangzhou and Shenzhen, in providing an attractive, well-connected location for companies to settle and run their businesses.

"It's definitely a milestone in the history of the city," said Zheng Renhao, Party secretary of Zhanjiang, at the trial run on Saturday. "The high-speed rail will serve as a golden passage for the city's economy and a happy passage improving the livelihood of residents."

It used to take almost 11 hours from Shenzhen to Zhanjiang by normal-speed train and eight and half hours from Guangzhou to Zhanjiang. The railway line connects Zhanjiang with Guangzhou and Shenzhen, the two most developed cities in Guangdong, and cuts travel time between them by more than half.

Previously, bus routes were used as the main arteries between Zhanjiang and other cities in Guangdong province, but were often hampered by traffic jams causing the routes to be unreliable. The distance between Zhanjiang and Guangzhou, the capital city of Guangdong, is some 420 kilometers. It took six hours or even longer during the national holidays.

"The transportation problem has been a bottleneck that has depressed the development of Zhanjiang, which meant it could hardly benefit from the strong economic growth of the cities in the Pearl River Delta area, including Guangzhou and Shenzhen," said Jiang Jianjun, mayor of Zhanjiang.

"A city without high-speed rail is like a person without access to the internet," Jiang said. "It means he is marginalized and not able to keep pace with the world."

Zhanjiang, which is conveniently located on the edge of Guangdong, bordering Hainan province and the Guangxi Zhuang autonomous region, has been given a more important role in the region's strategic development, according to Zheng.

"Zhanjiang has welcomed a new era which includes a closer approach to the Pearl River Delta area and will play a more critical role in the Guangdong-Hong Kong-Macao Greater Bay Area and Hainan free trade zone," Zheng said.

He noted that the opening of the high-speed rail network has been unanimously welcomed by government officials, business leaders and citizens of Zhanjiang, with all eager for the expected new opportunities that it will bring. 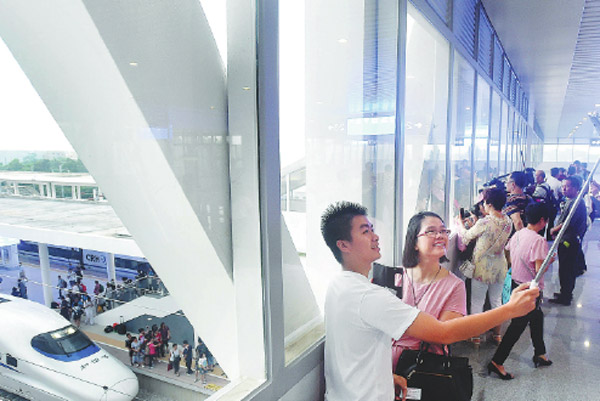 Passengers prepare to board a high-speed train on the Jiangmen-Zhanjiang Railway on its maiden run for the public. [Photo by Liu Jicheng/For China Daily]

Liang Xiaobin, director of the development and reform bureau of Zhanjiang said the city is expected to become a new investment destination for companies in the Pearl River Delta area, according to a report on the Zhanjiang Daily.

An increasing number of companies in the Pearl River Delta area are looking for desirable cities on the high-speed rail network for manufacturing or other service facilities, which could help to accelerate the industrial upgrade of Zhanjiang and promote economic growth in the city, he said.

Yang Wenguang, director of the Zhanjiang Bureau of Commerce, said that high-speed rail is a major factor for many companies when it comes to making investment decisions.

"Given the premier geographic location, abundant natural resources, excellent environment, convenient transportation and low production costs, Zhanjiang will attract more companies to settle down, which will stimulate the development of the city's trade and logistics," Yang said in the Zhanjiang Daily.

Huang Lipei, vice president of Zhanjiang Port Group, agreed that the high-speed rail would bring more people into Zhanjiang, as well as create better logistics which will in turn attract manufacturing and trade.

"The city's trade business and manufacturing are forecast to grow, which will benefit the ports in the long run," Huang said.

The ports in Zhanjiang handled a total cargo throughput of 280 million metric tons in 2017, an increase of 10 percent year-on-year, ranking the city 11th among all coastal ports in the country and the second in Guangdong, according to recently released statistics.

Its position as a domestically leading distribution center for iron ore, petroleum and coal will be further reinforced, Huang said.

Yu Jianren, chairman of the board of Guangdong Hotoli Science and Technology Co, based in Zhanjiang, said the operation of high-speed rail will bring more professionals to the city.

"It is very positive for the companies in Zhanjiang that intend to employ professionals from Guangzhou, Shenzhen or other cities in Pearl River Delta area, because the transportation has become so much easier," Yu said.

Roger Arnold, a research scientist at the China Eucalyptus Research Centre based in Zhanjiang, was one of the members of the public who rode the new high-speed rail during its trial run. He said that the line was a welcome addition to the city as well as being clean, spacious, comfortable and on time.