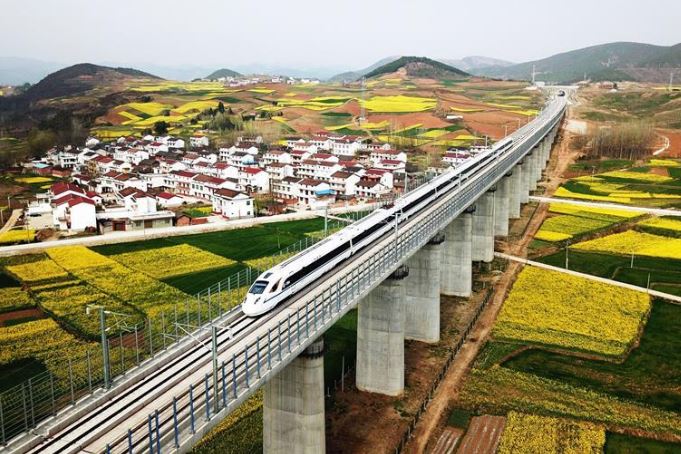 The construction of intercity high-speed rail systems, which are expected over time to cover all prefecture-level cities, is picking up steam in quite a few provinces across China, and experts said the system will help boost rural-urban integration.

According to local railway authorities, the Guangxi Zhuang autonomous region and Henan, Guangdong, Jiangsu, Liaoning, Shandong and Shaanxi provinces are among the provincial regions aiming to build intercity high-speed rail systems by 2020.

Fujian and Anhui are the only two provinces that currently have a high-speed rail system connecting all of its cities. Prefecture-level cities are ranked above counties.

Zhao Jian, an economics professor specializing in rail transportation at Beijing Jiaotong University, said that the intercity construction plans are focused on the country's central and eastern regions, which are densely populated urban areas. The intent is for less developed areas in these regions to be better connected with the regional economic centers.

The intercity railway system will greatly save travel time, boost the flow of labor and information and inject new impetus to the vast countryside. It will further coordinate the development of cities and villages and narrow their gaps in many areas, he added.

High-speed trains have become increasing popular among Chinese people. High-speed railways are expected to record more than 2.3 billion annual trips by the end of this year, which is over three times the passenger volume in 2012, or over three-fifths of all rail passenger trips, according to China State Railway Group.

Despite the rapid development of the high-speed network, the length and coverage of railways in many places is still inadequate, said Sun Zhang, a professor at Tongji University in Shanghai. He added that more balanced rail construction is needed to increase the accessibility to more small cities.

China's long-term railway planning provides a clear and consistent framework for the development of the system, which is of great importance to its remarkable achievements, according to a report released by the World Bank in July.

"Transport infrastructure has a very important impact on a region's urbanization," Sun said. "The intercity railway system will increase the attractiveness of mid- and small-sized cities and encourage inbound tourism, where more jobs can be created and business opportunities increased to form an environment for promoting higher income for rural residents."