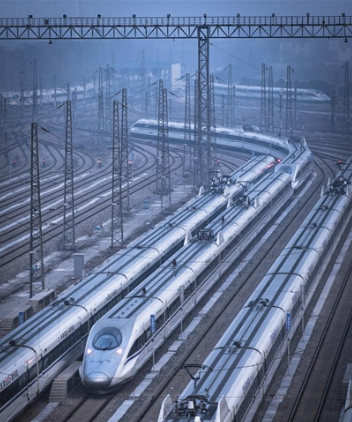 As hundreds of millions of Chinese prepared to take the fast train home at a top speed of 350 kilometers an hour for the Chinese Lunar New Year, scholars honed in on an article dubbing high-speed railway debt a "gray rhino," heatedly debating the long-term and often-invisible social and economic benefits of the country's fast-expanding high-speed rail network."Beware of the gray rhino of high-speed railways," Beijing Jiaotong University Professor Zhao Jian wrote in an article published on Monday, pointing out that plans for further massive rail expansion could overburden local governments and the state-owned China Railway Corporation (CRC) like a 'gray rhino' that drags on the country's economic growth. CRC, the operator of the world's longest and most modern high-speed railroad, had debts of about 5.28 trillion yuan ($787.4 billion) in the third quarter of 2018, financial portal chinabond.com.cn reported. Zhao's argument immediately trended, drawing supportive voices and also an official backlash from scholars, brokerage researchers and bloggers.Meanwhile as experts argued over infrastructure economics, millions of Chinese vied for train tickets on the 12306 ticket-booking website where trains and planes compete for their cash.About 3 billion trips are expected to be made during this year's Spring Festival rush and more than 70 percent of the trains run at speeds of over 250 kilometers an hour, the Xinhua News Agency reported on January 22..In 2018, China had more than 131,000 kilometers of track, of which more than 29,000 kilometers was high-speed, or more than two-thirds of the world total, Xinhua said.Defenders of the high-speed rail system argued that apart from alleviating pressure on the overall domestic transport system, high-speed rail has also contributed to the Chinese economy in the past decade. In particular, they noted how high-speed rail has reshaped the nation's tourism industry and increased the price of land along its routes. "China's HSR [high-speed rail] program has played a key role in national economic development through improving transport connectivity between China's major cities as well as accelerating economic development of inland provinces," Rajiv Biswas, Asia-Pacific chief economist at IHS Markit, told the Global Times on Thursday. Tourism now accounts for about 5 percent of China's GDP, according to Biswas.The economic impact of the high-speed rail network is far-reaching for China's GDP, Biswas said. Total GDP is directly boosted by railway construction and annual passenger revenue, he noted, but the indirect economic multiplier effects are much higher.Cong Yi, a professor at the Tianjin University of Finance and Economics, said that the high-speed railway integrated China's regions with long-term significance for the overall development of the economy.Debt concernsSome Chinese economists have expressed concern that the accelerated construction of the high-speed railway network created high-speed debt, together with operating losses and the concomitant financial risks.But others cautioned that describing the debt as a "gray rhino" might be "a thing of the moment" and the argument "won't be strong enough if the matter is seen over the long term."Zhu Dajian, director of the Sustainable Development and New-Type Urbanization Think Tank at Tongji University, said that "if you see this in the big picture, and over a longer time span, the debt issue related to Chinese HSR development is not so dangerous." Urbanization still has growth potential of 10 to 30 percent, Zhu said, and Chinese infrastructure construction up to 2030 will be supported by strong demand. "The construction of urban and city clusters needs HSR," Zhu said. For example, there was a pessimistic reception for the Beijing-Shanghai line, which eventually dispersed doubts by turning a profit at a much earlier date than anticipated, Zhu said. The Beijing-Shanghai high-speed rail line turned a profit within three years of its operation and can now generate an annual profit of about 10 billion yuan, news site sohu.com reported. Railway networks need time to prove profitable in the long term, Biswas noted. The tremendous size and growth of China's economy over the past decade has served to mitigate the debt burden of railway construction, he asserted.Total Chinese investment in railway construction in 2018 reached $117 billion, Biswas said, of which high-speed was "only a part of the total." This was still only 0.9 percent of Chinese GDP in 2018, which was $13.7 trillion, he said.The figures showed the deep capacity of the Chinese economy to absorb railway infrastructure development costs as "modern railways are a key driver for long-term national economic development," Biswas said.More tracksDomestically, the high-speed railway is something the central government has long promoted to the Chinese as a source of national pride and happiness. Abroad, HSR is one of China's export trump cards.China aims to put a further 3,200 kilometers of high-speed rail lines into operation in 2019, CRC officials said at their annual work conference in Beijing in January.Adjustments in railway construction are temporary and China's HSR development won't be altered in the mid to long term, Zhu said. "HSR construction has not peaked and won't peak for a certain period of time," he said.Zhang Jichen, a Beijing-based white-collar worker, has just booked a round-trip ticket on the newly opened Qingdao-Yancheng high-speed line from Beijing to her hometown of Lianyungang in Jiangsu Province.Zhang told the Global Times on Thursday the ticket cost 450 yuan, "while the plane ticket was 880 yuan and the train is much more comfortable than plane."It used to take about 14 hours for Zhang to travel the 1,024 kilometers by train from Beijing to her home in Lianyungang, or 90 minutes by plane. On the high-speed train, it takes six hours.