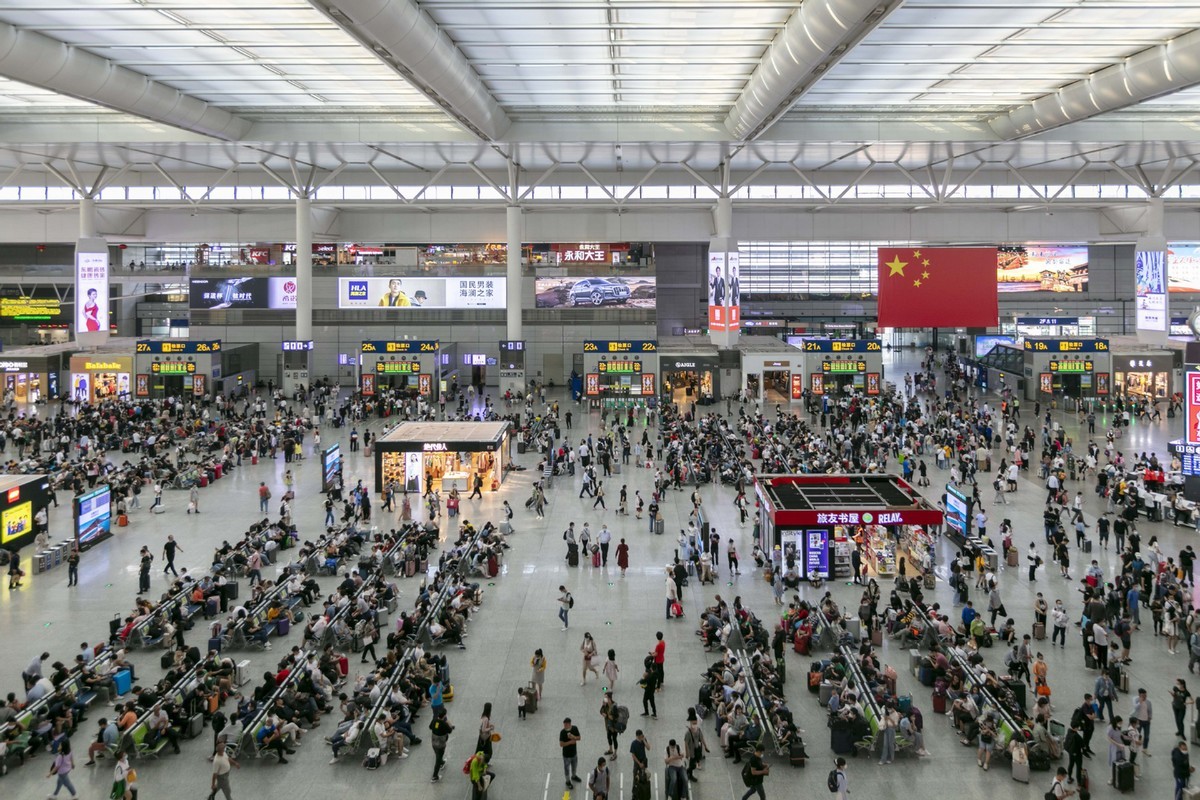 A train arrives at or leaves Shanghai Hongqiao Railway Station every 1.4 minutes, and every day more than 300,000 passengers pass through the station.

One can get around quickly by getting on a high-speed train from here: It only takes 45 minutes to get to Hangzhou, Zhejiang province, around one hour to Nanjing, Jiangsu province, a little over two hours to Hefei, Anhui province, and less than five hours to Beijing.

The busy scene at the station during the National Day holiday epitomizes the results of the large-scale construction of the nation's high-speed railway system over the past two decades.

The system, which is expected to span 39,000 kilometers across the country by the end of this year, has accelerated exchanges between regions, boosted the economy and made travel more convenient.

The Beijing-Shanghai high-speed rail service, which began operating in 2011, is the busiest in the nation. It has transported more than 1.18 billion passengers, improving ties between cities in the Beijing-Tianjin-Hebei area and the Yangtze River Delta.

For Feng Sheng, who joined the China Railway Shanghai Group in 2010 and has been a train attendant for the Beijing-Shanghai line ever since, the high-speed rail has always been a subject of pride.

The 30-year-old recalled her first trips with the high-speed train Hexie (Harmony) between Beijing and Shanghai, which started operation on June 30, 2011, and runs at a speed of 300 kilometers per hour.

"You could feel the excitement in the air," she said."Many people who had no reason to go to Beijing came to take the train just to experience the speed."

Six years later, when the 350 km/h Fuxing (Rejuvenation), the country's fastest train, debuted on the Beijing-Shanghai high-speed rail on Jun 26, 2017, Feng experienced celebrity status as one of the first people to travel on it.

"There were train fans asking me for signatures," she recalled.

Feng and her colleagues now make 12 round trips between Shanghai to Beijing every month, serving more than 20,000 passengers.

For Guo Yizhou, who lives in Wuxi, Jiangsu province, and works in Shanghai, the high-speed train is his choice for daily commuting.

When Guo was sent by his company to work in its Shanghai branch in 2015, Guo bought an apartment near Wuxi East Railway Station. Every morning, Guo arrives at the station to catch the G1509 train, which leaves at 7:59 am for Shanghai. The ticket costs 49.5 yuan ($7).

"I usually have my breakfast during the half-hour ride. After I get off the train, I transfer to metro Line 10, which is very convenient at Hongqiao railway station, and get to my company before 9:30 am," Guo said. "The commuting time is the same as that of my Shanghai colleagues."

The mobility of talent enabled by the high-speed rail has contributed to the innovation of the local economy.

Tu Jiangping, a professor of materials science and engineering of Zhejiang University, has been busy commuting between Zaozhuang, Shandong province, and Suzhou, Jiangsu province, to work on his project－a nonliquid lithium battery－which will soon undergo testing in Zaozhuang.

"I normally deal with miscellaneous matters during the 2.5-hour ride, and when I arrive, I can start my work at once," said Tu, who has brought his team to the Zaozhuang National High-Tech Industrial Development Zone, located near the city's high-speed railway station.

"The high-speed rail has reduced the distance between the first-tier cities and third-and fourth-tier cities like Zaozhuang," Wang said. "Many experts would like to bring their industrialization projects to the latter, thanks to the convenience of transportation. The flow of high-speed trains has been bringing us a flow of talent."