Hangzhou, capital of East China's Zhejiang province and dubbed China's hub for digital economy, has witnessed a leap in its economic growth and industrial transformation, focusing on the development of key sectors such as e-commerce, cloud-computing, big data and digital security. 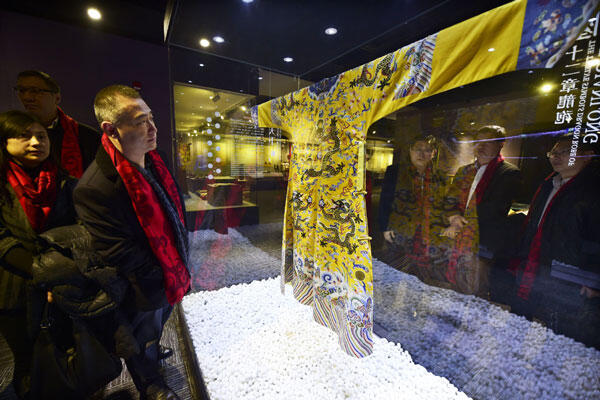 The digital economy currently accounts for 25.7 percent of Hangzhou's GDP, becoming a key growth engine of the city, where China's internet giant Alibaba is headquartered.

For example, Hangzhou-based Wensli Group, a leading silk brand in China, has leveraged the power of digital technologies such as big data since 2010 for its transformation from a traditional manufacturer to an active player in the cultural and creative industries.

The technology developed by the silk group, which combines the technologies of big data and cloud computing, has created an effective way for Wensli to solve the problem of uneven colors presented on the fronts and backs of silk products and enables its machines to print more complicated and delicate patterns on silk.

"Big data is the new engine to boost the transformation and upgrading of traditional companies," said Li Jianhua, chairman of Hangzhou Wensli Silk Culture Co Ltd. He noted that the ability to use data would be the core competitiveness of companies in the information era.

French luxury group Louis Vuitton Moet Hennessy reached a cooperation agreement with the time-honored silk brand to use its self-developed technology in August 2018. Products made by the technology will be labeled "Wensli Iart Technology Production", the first time a Chinese brand has appeared on LVHM products.

In a congratulatory letter to the 2019 China International Digital Economy Expo, which opened on Oct 11 in Shijiazhuang, Hebei province, President Xi Jinping called for more exchanges and cooperation in the field of digital economy and deeper integration of the digital economy and the real economy.

He said the booming digital economy is changing the way people live and work, and will have a profound impact on the world's economic and social development, the global governance system and the development of human civilizations.

Holley Group, headquartered in Hangzhou, which is engaged in the manufacturing of healthcare and pharmaceutical products, embarked on a journey of intelligent manufacturing in 2016.

"The core of intelligent manufacturing is far beyond the automation of production lines," said Wang Licheng, chairman of the group. He said there should be a new manufacturing method which could meet the customized and instant market needs while keeping costs within a reasonable range.

Holley invested 3 billion yuan to digitalize its factory with internet of things equipment, automated machines and artificial intelligence technologies in 2016, which Wang said is the foundation of smart manufacturing. The group joined forces with Siemens in the same year in designing an intelligent manufacturing system, which is expected to be generally completed by the end of 2019.

In May, the first 5G open laboratory in Zhejiang was launched in Binjiang district of Hangzhou with a group of high-tech enterprises and research institutions including Zhejiang Geely Holding Group, Hangzhou Hikvision Digital Technology and Nokia announcing plans to set up operations in the lab's real 5G network environment.

Projects concerning education, healthcare and public transport, including 5G intelligent buses from Geely Automobile Research Institute, are currently undergoing tests inside the lab. Experts say that once officially launched and commercialized, such cutting-edge technologies are expected to transform people's way of living such as daily commuting and the traditional industrial manufacturing model.

"While 5G technology is gaining momentum, the capital city of Hangzhou was selected as one of the first pilot cities for 5G networks in China," said Yuan Jiajun, governor of Zhejiang.

Qin Jirong contributed to the story.