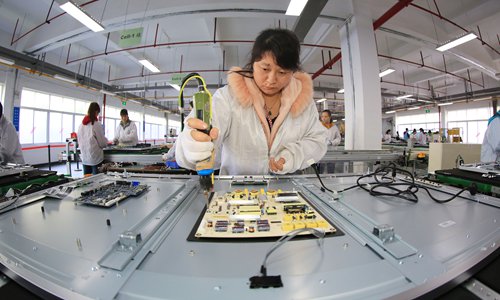 A growing number of top global companies in the high-tech, advanced manufacturing and new-energy sectors have unveiled investment projects in South China's Guangdong Province this year, a move that experts attribute to the local government's stimulus policies and an improving business environment.This trend will help create a complete advanced industrial chain and further promote the region's industrial upgrading, experts said. But they also said that a lack of international talent and the potential influence of the US tax cut may slow down the region's structural adjustment.In 2017, a total of 47 Fortune Global 500 companies have launched projects in Guangzhou, capital of Guangdong, with total registered capital of 38.2 billion yuan ($5.78 billion), according to the calculations of the Global Times.In March, construction of the world's largest 8k-resolution panel factory, with an investment of 61 billion yuan, was begun in Guangzhou by Taiwan-based electronic contractor Foxconn Technology, according to a statement the company sent to the Global Times on Tuesday. The project is the largest overseas investment in Guangzhou since China's reform and opening-up began in 1978, the statement said. Also, a 350,000-square-meter biopharmaceutical project, funded by multinational conglomerate General Electric, is now under construction in Guangzhou, the 21st Century Business Herald reported on Tuesday.In the first three quarters, foreign direct investment (FDI) into Guangdong surged 13.6 percent year-on-year to $16.96 billion, the highest in the country, according to data from the Guangdong Bureau of Statistics. Song Ding, an expert at the Shenzhen-based China Development Institute, hailed the trend as a sign that Guangdong Province has gradually shaken off its previous reputation as being a center of cheap manufacturing for low-end industries."In contrast to the scenario several years ago when foreign enterprises set up factories in Guangdong merely to take advantage of the province's cheap production factors, the newly launched projects mostly feature middle- to high-end industries such as the Internet, new energy and aviation," Song told the Global Times on Tuesday.Bai Ming, a research fellow at the Chinese Academy of International Trade and Economic Cooperation, agreed. He attributed the change to the "more efficient business environment in the province and stimulus policies rolled out by the local government to attract FDI." A spokesperson for Foxconn told the Global Times on Tuesday that it only took about 50 days for the company to negotiate with relevant parties and sign the 61 billion yuan project with the local government. On Monday, the Guangdong provincial government released 10 measures for attracting FDI, specifically aiming to entice Global Fortune 500 and high-tech companies, said the 21st Century Business Herald report. Industrial upgradeBai said that the inflow of the FDI in high-end sectors is in line with the Guangdong government's plan to make emerging industries such as artificial intelligence and new energy strategic pillars of its economy. "Guangdong's economy is transforming from being export-driven to being innovation-based, and the arrival of foreign high-tech companies will accelerate this process and boost Guangdong's global competitiveness," Bai said. Terry Gou, CEO and chairman of Foxconn, was quoted as saying in the statement that the panel factory in Guangzhou is not "merely a panel processing factory."The factory will also help encourage hundreds of upstream and downstream electronic suppliers to move their businesses to Guangzhou, creating a new industrial group valued at about 1 trillion yuan, Gou noted. "Following the flock of enterprises in related industrial chains and value chains into Guangdong, a complete industrial chain in high-end industries will be formed," Song said.But experts warned that the lack of international talent may hinder the cultivation of new economic growth engines."Most of the talent in Guangdong is from China… there is apparently a lack of diversity in talent compared with Silicon Valley in the US," Song said.Besides, the upcoming US tax cut, which will reduce the US corporate tax rate to about 20 percent from the current 35 percent, may also hinder US firms' willingness to move their plants to Guangdong, and might prefer to operate in the US instead, Bai noted.