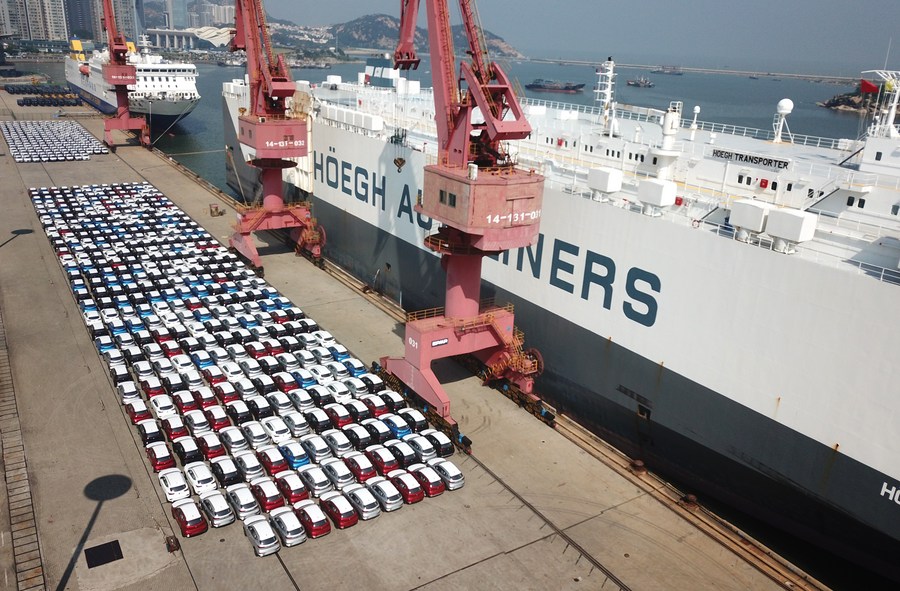 China is pursuing higher-level opening-up as an essential step in its future growth as it strives to shape its new development paradigm of "dual circulation" and offer more opportunities to the rest of the world for shared growth, experts and scholars said.

Speaking at the opening of the two-day 86th International Forum on China Reform held in Haikou, Hainan province, which concluded on Sunday, Xie Fuzhan, president of the Chinese Academy of Social Sciences, said building the new development paradigm, with the domestic market as the mainstay while the domestic and international markets reinforce each other, requires consistent reform and comprehensive opening-up.

While stressing the need to improve the business environment, Xie called for leveling the playing field so that a more efficient domestic market will help attract global production factors and resources.

Higher-level opening-up is essential in building the new development paradigm, he said, calling for continued efforts to advance trade and investment liberalization and facilitation, build an economy with a higher level of opening-up, and leverage the strength of the vast domestic market to promote robust, balanced, sustainable and inclusive growth of the world economy.

The forum, themed "High-Level Opening-up China and the World", was attended by around 600 Chinese and international scholars and experts, with some of them joining discussions online. It was jointly organized by the China Institute for Reform and Development, Bank of China and the China Public Diplomacy Association.

The forum came after last month's Fifth Plenary Session of the 19th Central Committee of the Communist Party of China adopted proposals for the 14th Five-Year Plan (2021-25) on the National Economic and Social Development and the Long-Range Objectives Through the Year 2035. The policy blueprint underlined the need to step up the building of the new development paradigm in the next five years.

In a video speech delivered to the forum, Ban Ki-moon, former secretary-general of the United Nations and the current chairman of the Boao Forum for Asia, said China's high-level opening-up has great relevance to promoting economic globalization.

Ban said that through opening-up, China plays a significant part in the global fight against the COVID-19 pandemic. It also helps the global economy recover from recession caused by the pandemic, safeguard multilateralism and promote free trade, he added.

Shen Danyang, vice-governor of Hainan, said the province is striving to implement the national strategy of building the free trade port on the island and making Hainan a pacesetter for the country's opening-up.

To this end, Hainan has taken steps to promote the liberalization and facilitation of trade, investment, cross-border capital, human resources and transportation and to ensure safe and orderly data flows, Shen said, adding that it has also unveiled competitive taxation policies and strives to build a world-class business environment.

Opening China's market in services and accelerating the growth of trade in services will be the key to unleashing the potential of the nation's consumer spending in the next five years and beyond, said Chi Fulin, president of the China Institute for Reform and Development.

Noting that trade in services is on course to becoming the priority area for China's economic upgrading and transformation, he said China's efforts to develop the trade not only comply with its domestic consumption demand but also create enormous potential for mutually beneficial cooperation with other countries.

Addressing the forum, Zhou Shuchun, publisher and editor-in-chief of China Daily, called for efforts to explain the "development logic" of China on its new journey toward modernization.

Wu Hailong, chairman of the China Public Diplomacy Association, called for institutional opening-up in terms of rules, regulations and standards while advancing higher-level opening-up that facilitates international cooperation and competition.

He also underlined the need to uphold the international system with the UN at the center, safeguard multilateralism and promote trade and investment liberalization.