Chinese Premier Li Keqiang delivers a government work report at the opening meeting of the fourth session of the 13th National People's Congress at the Great Hall of the People in Beijing, capital of China, March 5, 2021. (Xinhua/Ding Lin)

The opening meeting of the fourth session of the 13th National People's Congress (NPC) started at the Great Hall of the People in Beijing on Friday, attended by Chinese President Xi Jinping and other state leaders.

Premier Li Keqiang delivered a government work report on behalf of the State Council to the national legislature for deliberation.

Here are the highlights from the work report:

Li said China was the world's only major economy to achieve growth in 2020 and has won a complete victory in the fight against extreme poverty.

With GDP growth of 2.3 percent in 2020, a better-than-expected recovery was achieved in the country, he noted.

In the past five years, over 60 million urban jobs were added and the world's largest social security system was established, Li said.

As the national legislature prepares to review the draft outline of the 14th Five-Year Plan (FYP), China has accomplished the major goals and tasks of the 13th FYP, Li affirmed in the report.

The country has set its GDP growth target at above 6 percent for 2021, the premier said.

"We will stay true to the letter and spirit of the principle of 'One Country, Two Systems', under which the people of Hong Kong administer Hong Kong and people of Macao administer Macao, both with a high degree of autonomy. We will improve the relevant systems and mechanisms of the two special administrative regions for enforcing the Constitution and the basic laws," Premier Li said.

China will ensure the implementation of laws and enforcement mechanisms for the two special administrative regions to safeguard national security. "We will resolutely guard against and deter external forces' interference in the affairs of Hong Kong and Macao," he said. 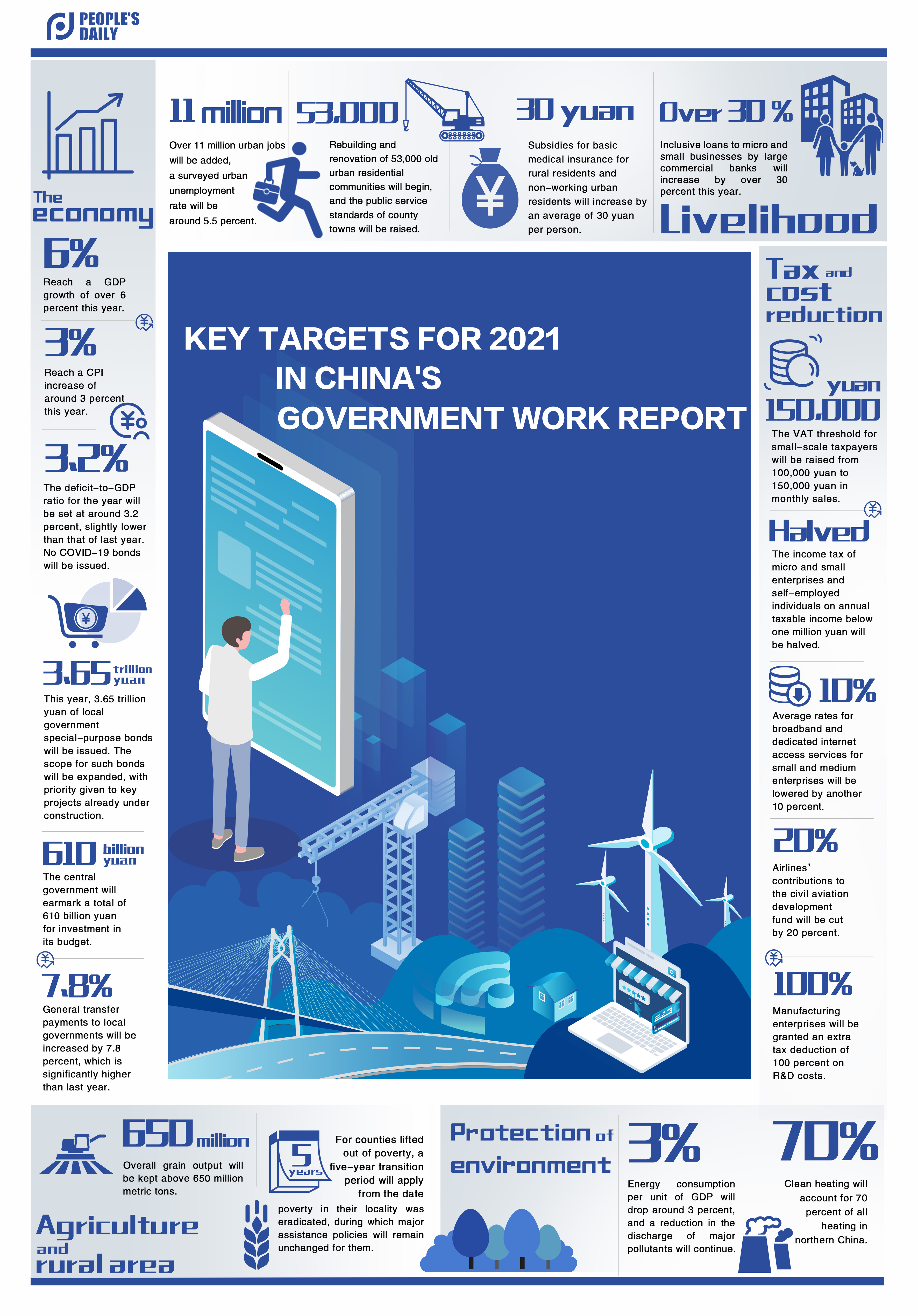 Poster produced by Lin Yuan and He Xi.

The global economy continues to face grave challenges as the COVID-19 pandemic rages on around the world, the premier said.

"We will face these problems and challenges squarely, make every effort to make improvements, and do all we can to live up to our people's expectations," he affirmed.

With the world still battling the pandemic, Li said China supports global cooperation on combating COVID-19 and calls for building a global health community. China has also made important contributions to advancing global peace and development, he added.

China will pursue high-standard opening-up and promote stable and improved performance in foreign trade and investment by promoting the steady growth of imports and exports, high-quality Belt and Road cooperation and strengthened multilateral, bilateral and regional economic cooperation, Li said.

"We will open up more sectors of the economy in a more thorough fashion and participate more fully in international economic cooperation," he said, adding, "China will improve and adjust import tariff policies and increase imports of quality products and services."

The premier added that China will focus on reform in 2021, in areas including state-owned enterprises, energy, transportation and telecommunications. He called for efforts to promote the common development of enterprises under diverse forms of ownership and reduce their production and operating costs.

China will continue to implement its rural revitalization strategy and promote steady development of agriculture and increase incomes of the rural population, Li said.

The country will consolidate and expand its achievements in poverty alleviation with efforts to promote rural revitalization. A five-year transition will also be introduced to enhance continuous monitoring and assistance mechanisms.

Innovation will continue to be a key priority for China, with further efforts to boost the role of enterprises through tax deductions and bringing them together with research institutes, universities and end-users, Li stressed.

China will continue to grant an extra tax deduction of 75 percent on enterprises' R&D costs "and we will raise this to 100 percent for manufacturing enterprises," the premier told the meeting.

China will intensify efforts to "keep our skies blue, our waters clear and our lands pollution-free," Li said at the meeting.
He said that China will strengthen comprehensive measures and joint efforts on air pollution prevention and control, with the goal of clean heating accounting for 70 percent of all heating in northern China.