HK act sponsors could be put on no-entry list: analysts 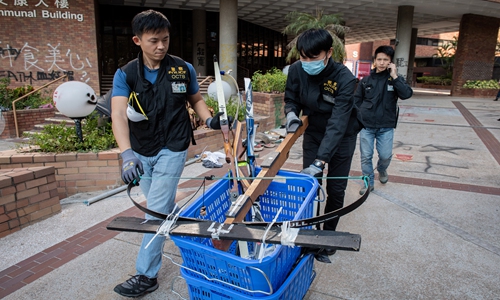 Police officers push a basket containing bows as they search for any remaining dangerous explosives and chemicals at the Hong Kong Polytechnic University in the city's Hung Hom district on Thursday. (Photo: AFP)

China expressed its indignation Thursday over the Hong Kong-related act signed by US President Donald Trump and vowed to take tough countermeasures against such sinister intentions, which is aimed at disrupting the nation's endeavor to realize the great rejuvenation.

When the US Congress passed the bill earlier, several Chinese government departments called the move a blatant interference in China's internal affairs, warning that China would come up with equivalent countermeasures if Washington enforces it. While Trump signed it into law, government departments, including the Foreign Ministry, the liaison office of the Chinese central government in Hong Kong, and the Hong Kong and Macao Office of the State Council, further toughened their statements by expressing the utmost indignation and condemnation.

Le urged the US side to correct its mistake, not to implement the law and stop interfering in Hong Kong affairs to avoid causing further damage to China-US cooperation in vital areas. "China will firmly launch countermeasures against this wrong move and the US must take responsibility for all the results," Le noted.

It aims to undermine Hong Kong's stability and prosperity, sabotage the practice of "one country, two systems," and disrupt the Chinese nation's endeavor to realize the great rejuvenation, the ministry said.

The Hong Kong and Macao Office of the State Council and the Liaison Office of the Hong Kong government also slammed the signing on Thursday, saying it is against the interests of 1.4 billion Chinese people, including 7 million Hong Kongers, and vowed to retaliate with strong countermeasures.

Asked when and what countermeasures will be introduced, the Chinese Foreign Ministry spokesperson Geng Shuang said at Thursday's routine press conference, "Please keep an eye on them. They will come sooner or later."

The strong words by Chinese government departments on the Hong Kong act were interpreted as the central government's determination to treat Hong Kong issues from a national security perspective. And if external forces pose a threat to China's national security, Beijing will take action immediately, analysts said, noting the countermeasures are ready to be implemented as soon as the US enforces the act.

The US is escalating its attempt to fully contain China by signing the bill. It means that the US will officially interfere in Hong Kong affairs, Fan Peng, a research fellow at the Chinese Academy of Social Sciences' Institute of Political Sciences, told the Global Times.

Over the past five months, the US has been exerting influence and putting its hands in Hong Kong affairs.

Not only have some US media covered the social unrest from a biased perspective, some US politicians praised Hong Kong radical protesters by calling them "pursuers of democracy." US House Speaker Nancy Pelosi once described Hong Kong riots as a "beautiful sight."

Some Hong Kong extremists received significant funding from the National Endowment for Democracy which was called by a Japanese magazine "a CIA soft power cutout that has played a critical role in innumerable US regime change operations."

Observers noted that the passage of the act in Congress before the district council elections showed Washington's intention to help opposition groups seek power and challenge Beijing.

The US intends to use the Hong Kong issue as a political card, just like Xinjiang, to force China to make unfair concessions in the ongoing trade talks with the US. By doing so, the US can interfere in China's domestic affairs from all sides, including its judicial system, Fan said.

However, the US should not underestimate Beijing's determination to safeguard national security and prevent Hong Kong from becoming an anti-China camp. And the central government has been mulling countermeasures, including political, economic, and even military options, analysts said.

Tang Fei, a member of the council of the Chinese Association of Hong Kong and Macao Studies, told the Global Times on Thursday that China could launch countermeasures such as including US companies and individuals who interfere in Hong Kong affairs in China's Entity List, cutting their access to the Chinese market.

"Also, China could restrict some US politicians from entering the country, especially those who interfered in Hong Kong affairs," he said. Some US lawmakers who openly voiced support for Hong Kong rioters, including House Speaker Nancy Pelosi, Marco Rubio, Michael McCaul, and Chris Smith, could be on the restricted list.

Fan noted that if some radical anti-government forces continue to collude with foreign forces, hoping the latter could help them secede from national sovereignty, they would only push the central government to strictly manage the city.

Analysts who closely watch the Hong Kong situation told the Global Times that "the act's purpose is what we had expected," as the US would "swim with the current" while adding more legal tools to contain China.

The bill was passed in both houses of Congress, showing that the hawkish political force in Washington is strong, said Tian Feilong, an associate professor at Beihang University in Beijing.

"Trump lacks the political power to veto the bill, while it's believed that a veto is unnecessary. His signature was expected," he said.

However, the US president may selectively implement provisions of the act as leverage for ongoing trade negotiations, but he may also hold sanctions that are unfavorable for the talks, the analyst noted.

Emphasizing that the US president reserves the right to exercise this law implies that Trump is dissatisfied with politicians in Congress who interfere with his own foreign affairs authority, "and he pledged to reserve the right to make further moves in accordance with the law," said Li Xiaobing, an expert on Hong Kong, Macao and Taiwan studies at Nankai University in Tianjin.

"Trump is using the act as leverage for trade negotiations with China, but Congress is not, especially for those who advocate to besiege China with ideology. So the discretion of the act will probably be a problem between the US president and Congress," Li noted.

Trump and Congress will have a lot of contradictions over the act, Li warned.