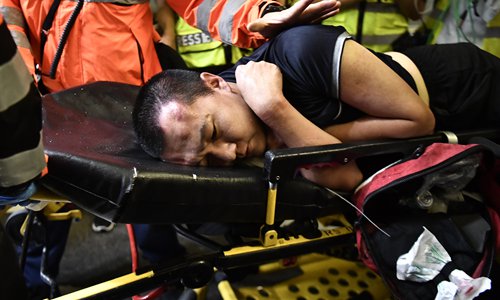 The Hong Kong and Macao Affairs Office of the State Council on Wednesday severely condemned the "near terrorist acts" against two mainland citizens, carried out by violent protesters at Hong Kong airport on Tuesday night.

The violent protesters tied up a Global Times reporter and beat him, under the excuse that they suspected the reporter's identity, said Xu Luying, a spokesperson for the Hong Kong and Macao Affairs Office of China's State Council.

Before this, these violent protesters had also illegally held and beat a Shenzhen resident surnamed Xu, who had arrived at Hong Kong airport to pick up friends.

These protesters attempted to prevent medical staff access, and it took the police four hours to remove Xu from danger.

"We send the strongest condemnation against the 'near terrorist acts' committed by the protesters, and send condolences to the injured and the Hong Kong police," said Xu.

She continued, saying that radical protesters in Hong Kong have gone beyond the bottom line of law, of ethics and of humanity. "Their actions show extreme defiance toward laws, and have severely damaged Hong Kong's international image and hurt the feelings of people from the Chinese mainland."