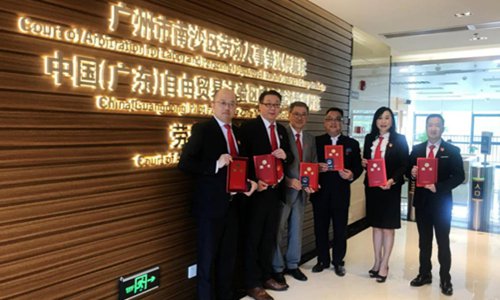 Seven lawyers from China's Hong Kong and Macao  special administrative regions were hired as labor dispute arbitrators by the government of the Nanshan district in Guangzhou, South China's Guangdong Province, which the lawyers said would promote communication over laws between the two regions and the mainland and help regional companies develop better in the Guangdong-Hong Kong-Macao Greater Bay Area (GBA).

They became the first batch of lawyers from the two regions to obtain a national certificate as labor dispute arbitrators, according to a statement the Nansha district government sent to the Global Times on Sunday.

The lawyers, five from Hong Kong and two from Macao, were officially appointed by the Nansha district government on September 18 and will start working this year, read the statement.

Zhao Zhipeng, who is one of the lawyers and solicitor of the High Court of Hong Kong, told the Global Times on Sunday that their job will be to help hear and arbitrate labor and personnel disputes in the Nansha free trade zone, especially those involving workers or companies from Hong Kong and Macao.

"The appointment could encourage the lawyers from Hong Kong and Macao to positively participate in the law-based construction in the mainland," Zhao said, noting that they can help Hong Kong companies develop better in accordance with laws and regulations in the zone.

Nansha is among the three areas covered by the China (Guangdong) Pilot Free Trade Zone.

Established in 2015 as a new frontier area for further economic opening-up, the district is also expected to play a more significant role in helping Guangzhou integrate into the China-proposed Belt and Road Initiative as well as into the GBA.

As laws and regulations are different in Hong Kong and the mainland, the appointment provides an opportunity for lawyers from the two sides to learn from each other and help promote the development of labor relations in the GBA, James Wong JP, another of the seven lawyers and vice chairman of the Greater China Legal Affairs Committee of the Law Society of Hong Kong, told the Global Times.