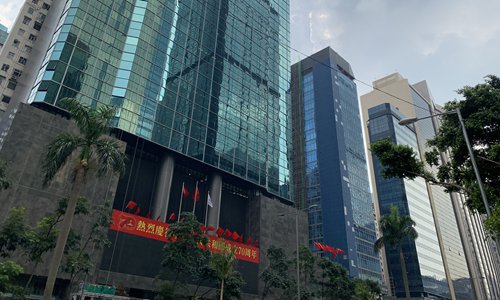 Chinese national flags and banners to commemorate the 70th anniversary of the founding of the People’s Republic of China flutter in Hong Kong's Wan Chai district on Friday. (Photo: Global Times)

Safeguard Hong Kong Alliance, an association advised by former chief executive Leung Chun-ying, has launched a citywide campaign to protect the Chinese national flags while the city is to celebrate the 70th anniversary of the founding of the People's Republic of China.

The move came following numerous incidents in the past weeks where radical protesters and rioters had targeted the national flag.

The association urged Hong Kong citizens to stand in solidarity to protect the Chinese national flag - a hallmark of the country that is sacred and inviolable, as the anniversary celebration is round the corner.

Over 10,000 people are slated to join voluntarily to safeguard the national flags fluttering across the city during the upcoming celebrations.

Such acts seriously violated the National Flag and National Emblem Ordinance, and attacked the bottom line of the "one country, two systems" principle, Hong Kong lawyer Kennedy Wong Ying-ho said during a press conference on Friday.

"It is highly intolerable to see such illegal acts as the celebrations loom," Wong added. He said that the alliance suggested the Hong Kong Special Administrative Region (HKSAR) government petition the High Court for an interim junction to protect the national flags outside all government buildings.

The government has condemned the illegal act of trampling and desecrating the national flags, and some suspects have been sued for violating the law. In a recent case, a 13-year-old girl was arrested for burning the national flag in front of Tuen Mun Town Hall on Saturday, according to media reports.

"The HKSAR government has been suggested to apply for an interim injunction to ban any person from venturing into an area of 10-meter radius around a national flag pole, any acts of damaging the Chinese national flag are illegal, and special police force deployment is needed to protect the national flags at major building and sites in HK," Wong said.

Repeatedly desecrating the national flags is unacceptable, which has seriously hurt the patriotic feelings of many HK residents.

As the anniversary celebration draws near, the Global Times reporters saw some buildings in Wan Chai and Admiralty -- major business and shopping areas -- decorated with the national flags and red banners reading "Celebration of 70th Anniversary of Founding of PRC." Cultural activities such as introducing Chinese tea and cooking Chinese delicacies were also seen on the streets of Wan Chai.

The Liaison Office of China's Central Government in Hong Kong has also severely condemned a series of illegal and violent acts of mutilating the national flags, followed by criminal acts of trashing, abandoning, and burning the flags over the past few weekends.

"Such illegal acts are a blatant challenge to the central government's authority, the dignity of the Chinese nation, which must be dealt with strictly according to law," the liaison office said.