CHINA HK back on its feet after protests, epidemic

HK back on its feet after protests, epidemic 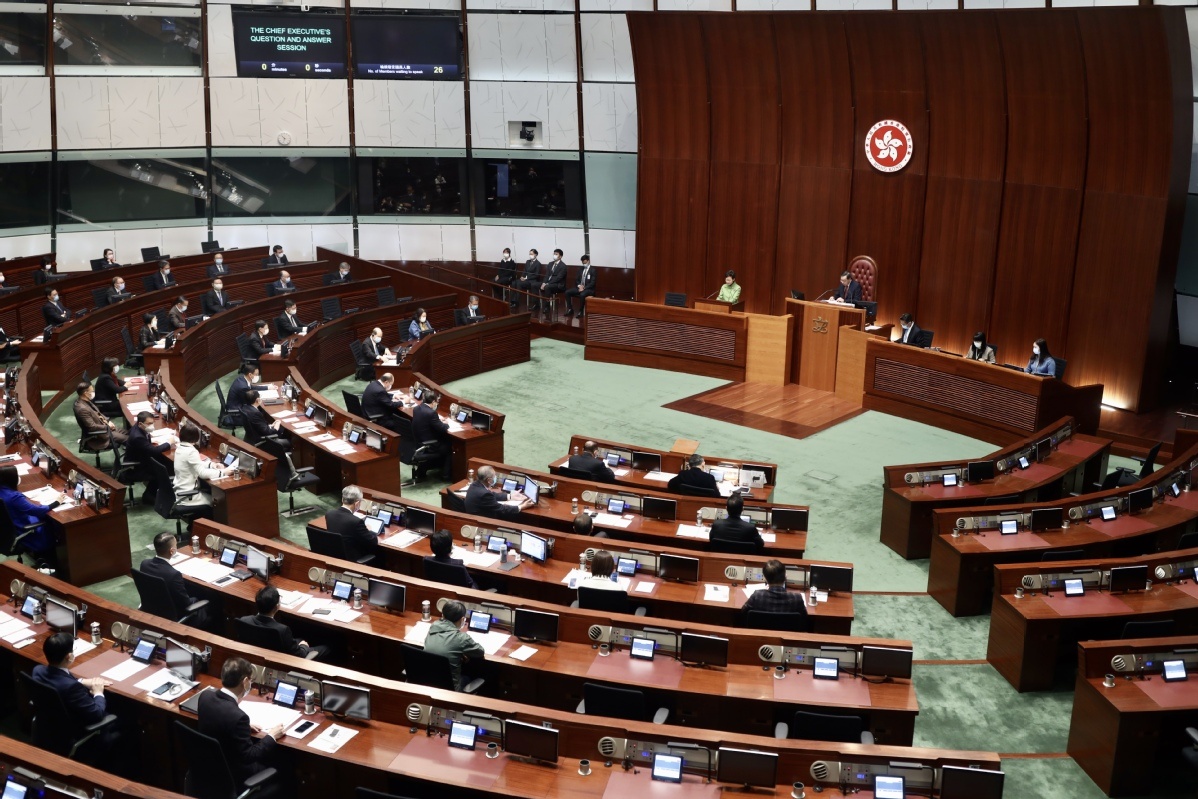 Last year marked a turning point for Hong Kong. After the traumatic protests in 2019, society healed the wounds while battling a crippling epidemic, seeing positive signs of change on the streets, on campuses, and in people's vision for the future.

The changes have been sustained by the Hong Kong people's resilience in times of hardship, together with timely support from the central government, which took decisive action to steer the city on the right course.

Following a series of initiatives last year to restore law and order in the Hong Kong Special Administrative Region, the National People's Congress－the nation's top legislature－has now taken a further step to safeguard the city's long-term stability and prosperity by drawing up a draft decision on improving its electoral system to ensure patriots govern Hong Kong.

According to the draft, which was submitted to the fourth annual session of the 13th National People's Congress on Friday for deliberation, the improvement will be centered around the reformation and greater empowerment of Hong Kong's Election Committee, which elects its chief executive.

In a speech explaining the decision, Wang Chen, a vice-chairman of the NPC Standing Committee, said it was designed to remove Hong Kong's existing institutional deficiencies and form a new democratic electoral system suited to the city's realities and characteristics.

In October, the NPC Standing Committee laid out explicit requirements for aspiring lawmakers to uphold Hong Kong's Basic Law and honor their pledge of allegiance to the special administrative region.

In light of the changes, Hong Kong Chief Executive Carrie Lam Cheng Yuet-ngor said 2020 was a new start to the steady implementation of the "one country, two systems" principle. She also said that the support provided had laid a solid foundation for Hong Kong's lasting prosperity and stability, and that her feelings were shared by many Hong Kong people who longed for peace and a return to normality.

After the implementation of the National Security Law, a Hong Kong resident surnamed Wan said she felt much more assured and comfortable in her daily life, given the drop in protest violence that plagued the city for about a year beginning in June 2019.

During the unrest, which was sparked by the government's move to amend extradition laws, black-clad protesters wreaked havoc in the city through fierce attacks on police officers, extensive damage to public facilities, assaults and threats to passersby who expressed different political views, and vandalizing stores with links to the Chinese mainland.

Wan said she can now dress in whatever colors she likes, go to shops regardless of their links to the mainland, and express her opinions without fear. She even dares to erase anti-government slogans on the streets, unafraid of reprisals from protesters.

"The voice of justice has taken the upper hand and radical forces have lost their momentum... this is what a civilized society should be," she said. "I'm really happy that everything has returned to normal."

Renato, an Italian-born Hong Kong resident who has lived in the city for two decades, said he considered moving to Shenzhen, Guangdong province, with his wife and son at the height of the unrest. Although they didn't follow through with the idea, the fear and panic they experienced at that time still affected their peaceful existence in Hong Kong.

Feeling outraged by the rioters' destruction of the city, he welcomed the arrival of the security law, which has effectively safeguarded his second home. Pleased to see that the city has moved back on the right course, he has also regained confidence in its future.

Deterred by the law, some political groups advocating "Hong Kong independence" disbanded, and some activists fled the city. As of Feb 1, 97 people had been arrested on suspicion of violating the National Security Law, including high-profile figures Jimmy Lai Chee-ying and Joshua Wong Chi-fung. Eight of the suspects have been prosecuted.

Citing these developments, Hong Kong Secretary for Security John Lee Ka-chiu told a United Nations web conference on March 1 that the effect of the National Security Law is "obvious and direct". He added that, contrary to misperceptions, Hong Kong residents continue to enjoy legitimate rights and freedoms enshrined in the Basic Law, and have extra protection from national security threats. 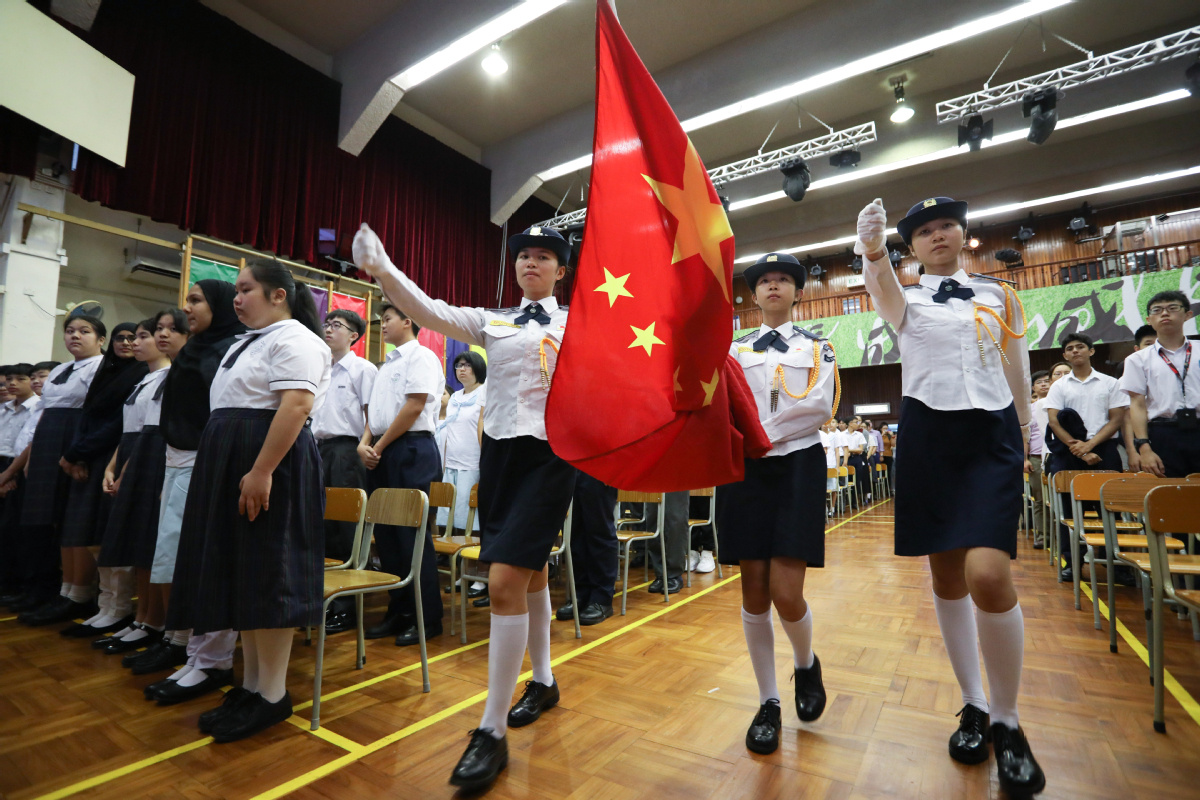 The changes on campuses have also been remarkable. The calm atmosphere is a far cry from that during the protest movement, when campuses became battlefields and the education system was dragged into a political vortex. Radical students and teachers now think twice before they spread subversive political messages, and school authorities are taking more initiatives to deal with disorder. This has created better conditions for most students to focus on their studies, said Wong Kwan-yu, president of the Hong Kong Federation of Education Workers.

More universities have taken a tougher stance against those who exploited the campuses for their political agendas. In a statement on Feb 25 this year, the Chinese University of Hong Kong kept its distance from the student union's newly elected committee, which repeatedly spread "Hong Kong independence" messages.

For secondary and primary schools, the Education Bureau issued a detailed guideline on Feb 4 that instructed managements to prevent activities that might contravene the National Security Law. Along with that is a curriculum framework covering all grade levels to improve students' understanding of national security.

Wong Kwan-yu said that since the law's enactment, related parties in the education system－whether school management, teachers, or parents and students－have more courage to speak out against actions that might harm the learning atmosphere on campuses.

Legislature back on track

He hailed the government move as the first and foremost step to carry out national security education in the city, which was Hong Kong's long-overdue responsibility. With the guideline in place, he hopes schools will strictly follow the instructions to ensure a healthy study environment.

The city's legislature is now back on track after the central authorities clarified the qualification of Hong Kong lawmakers, said Kwok Wai-keung, a lawmaker.

In recent years, the Legislative Council suffered heavily from the opposition camp's filibustering moves, which sometimes involved physical conflict. The city's annual fiscal budget was frequently delayed for months. The Legislative Council House Committee was paralyzed for about half a year after the legislature resumed business in October 2019, blocking the deliberation of numerous livelihood-related bills.

Four opposition lawmakers were disqualified following the central government clarification, and most other members of the camp resigned from their posts. Shifting from chaos to order, the legislature has resumed normal operations, with more rational discussions and increased efficiency, Kwok said.

Given the improved situation in the legislature, Lam said the government will propose five legislative amendments this year, including empowering the city's privacy watchdog to carry out criminal investigations into disclosures of identity, addresses or other personal details, and introducing overseas-trained doctors to ease the city's acute shortage.

The central authorities' moves, especially the National Security Law, also laid the groundwork to rein in wayward behaviors among district councilors, said Kwok, who is also an Eastern District councilor. After their sweeping victory in 2019, many opposition councilors exploited public office as a platform to confront the government and promote radical political ideas.

More than 20 district councilors have been arrested on charges of violating the National Security Law. Kwok said most opposition councilors have rolled back their radicalism on public occasions, but the approach of putting their political agenda above livelihood issues hasn't changed. As per the requirement of the National Security Law, the government will soon propose to the legislature that all district councilors must swear allegiance to the Hong Kong Special Administrative Region. Kwok hopes the move will fundamentally regulate their behavior.

Wiva Wei Jiajun, a millennial Hong Kong entrepreneur, said Hong Kong people have been given a shot in the arm, with a positive outlook expected following the central authorities' decisions.

With a more stable business environment, investors' confidence in the Hong Kong market is growing. During the unrest, Wei's company lost many overseas orders due to manufacturing and delivery uncertainties. A Singaporean client even discussed business with him at Hong Kong International Airport and did not visit any other places in the city because of safety concerns. Currently, although the global economy is still plagued by the COVID-19 pandemic, at least political uncertainty is no longer a major concern for investors, Wei said.

Hong Kong youths are also embracing opportunities on the mainland in a more active way, said Wei, who has businesses in Hong Kong and Guangzhou, Guangdong's provincial capital. Affected by the previous polarized social atmosphere, with strong anti-mainland sentiments, some young people with brilliant business ideas refused to go to the mainland, or were warned off going. Now more discussions have been held regarding the prospects of the mainland market as well as the government's facilitation policies, Wei said.

Hong Kong has maintained its economic edge amid the pandemic, with robust stock and real estate markets, and a considerable influx of foreign capital.

There is an even broader development stage ahead. This year's budget listed concrete measures to participate in the country's dual circulation strategy, and Lam's latest Policy Address also included multiple initiatives to deeply integrate the city with national development.

Given such internal and external conditions, Wei said he believes Hong Kong will prosper again as one of the world's great international metropolises.