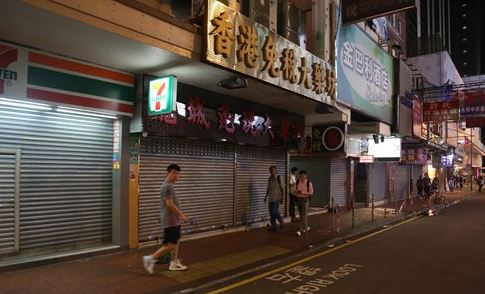 As illegal assemblies in Hong Kong continue to disrupt normal life in the city and protesters paralyzed the Hong Kong airport for two consecutive days, business representatives and local residents called the anti-government movement a "suicide mission" that will destroy the local economy.

Anti-government protests which have turned violent have seriously dampened the outlook of Hong Kong's economy. Most sectors, including retail, tourism and investment, have been greatly affected, and future implications on the economy will be felt, industry representatives warned.

Mainland tourists make up roughly 80 percent of all visitors to the city, and provide 40 percent of Hong Kong's retail revenues.

Some 51 million Chinese tourists from the mainland arrived in Hong Kong last year. That has fallen three months in a row since February, local media reported.

Hong Kong's PMI sank to a decade-low 43.8 in July. Retail sales, another indicator of economic performance, are also gloomy.

June figures released by the Census and Statistics Department of the Hong Kong government show that total retail sales in June 2019, provisionally estimated at $35.2 billion, dropped by 6.7 percent compared with the same month last year.

As the scale of violent protests continued to grow in July and August, the Hong Kong Retail Management Association said in its June monthly report that member companies are "very concerned about the prolonged protests in different parts of the city" and it forecasts a single- to double-digit drop in sales for July and August.

Hong Kong's economic growth has been sluggish due to weaker demand and consumption. Violent illegal assemblies, which have hit populated areas and shopping districts, have also damaged Hong Kong's reputation as a diverse, safe and dynamic society ruled by law.

"It has hurt the fundamentals of Hong Kong's economy, especially of small- and medium-sized enterprises (SEM)," said Chan King, vice president of the Hong Kong Chinese Importers and Exporters Association.

The purpose of opposition forces is to obstruct economic development through unlawful assemblies in business and populated areas, he noted. "They want to hijack the business circle to force the Hong Kong government to compromise and to further jeopardize the development of the mainland," Chan said.

The unrest in Hong Kong has also seriously hurt local industries such as tourism, trading and logistics, and endangered local employment growth, according to official data.

Local residents have consumed less in recent months due to rising safety concerns, and business confidence in SMEs slumped to its lowest in three years.

Logistics, trade, finance and services, and tourism contributed to 60 percent of Hong Kong GDP. If situation continues to deteriorate, it would directly affect the city's core sectors, said Kun Liu, a senior consultant at Retex Group, an international consulting and retail management agency.

Closed restaurants and shops during weekends have become a common scene in Hong Kong, as the city has been hit by protests that have turned into illegal assemblies and riots.

A survey of 1,012 employees conducted by three major associations under the Federation of Hong Kong and Kowloon Labor Unions in the tourism sector showed that the average income of these respondents has slumped 80 percent since June, and more than 10 percent of practitioners interviewed said they earned nothing.

The summer boom for Hong Kong's tourism industry has become a chilly winter of unemployment and economic hardship. A tour guide used to receive 12 to 15 tour groups every month, but many tours from the Chinese mainland, Southeast Asia, Europe have been cancelled.

"The impact is even more severe than the 2003 SARS outbreak," said Paul Lau Chun-yuen, president of the Hong Kong Tour Escorts General Union.

Several countries, including the UK, the US, Ireland and Japan, have issued travel alerts.

Global Times reporters saw some tourists intimidated by black-clad radical rioters at illegal protests, as they occupied streets and roads at some shopping districts such as Tsim Sha Tsui and Mong Kok.

In the past weekend when protests hit those areas, almost all the stores and shopping malls were closed, and some tourists from abroad were caught in the middle of standoffs between police and rioters.

"It is like suicide that will destroy the city as an international financial and trading hub," Chan , told the Global Times on Tuesday.

Hong Kong attributes its success to its fairness, safety and rule of law, business insiders said.

For the past two months, the protests have become more violent, from peaceful demonstrations to besieging government buildings and police stations, from insulting the national emblem to paralyzing transportation. Some forces want to disrupt Hong Kong's economy, and that is painful, Choi Koon-shum, chairman of the Chinese General Chamber of Commerce, Hong Kong, told the Global Times.

Financial institutions also cut their economic growth forecasts for Hong Kong, according to media reports. But industry representatives believe Hong Kong's economic turmoil will have little impact on the mainland.

"Hong Kong is important as a trade transit hub, but with the development of mainland ports, the proportion of Hong Kong's economy to the mainland's GDP is very limited," Chan said.