Kate Lee Hoi-wu's small family business suffered a setback after she spoke out against the violence in Hong Kong at a pro-police rally in late June. 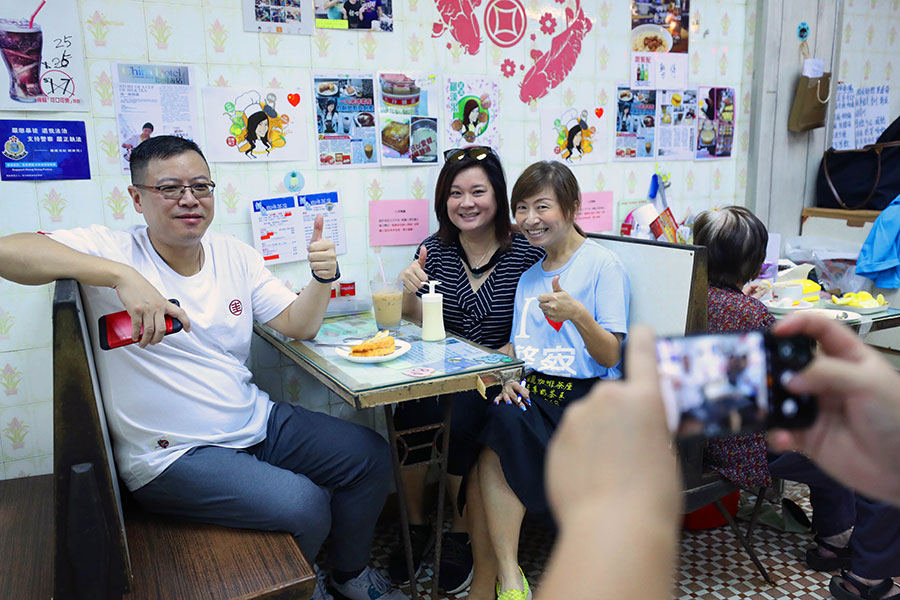 The owner of Ngan Loong Cafe, a restaurant in Lei Yue Mun at the east entrance of Victoria Harbour, suddenly became the target of hateful telephone calls and nasty complaints online against her cafe and herself. Most comments were attributed to radical anti-government protesters, resentful over her outspoken support for the city's police force.

Her business plummeted by more than half during the three weeks after she expressed her views at the rally. Anti-government protesters called for a boycott of her cafe. She lost some loyal customers.

"Many said businesspeople should not be at the frontline of political disputes. I know if I shut up, protesters would leave me alone," she said. "But I told myself, stand with conscience."

Lee said she wanted to do her part for the police officers who have made a lot of sacrifices in the face of great physical danger and unfair accusations, as the unrest has now seen police becoming a target of violence and online abuse.

The 51-year-old single mother took over the family business a few years ago after the deaths of her father and younger brother. She took on the roles of cook, cashier and cleaner.

Much to her surprise, the cafe's revenues, which had bottomed out in August, are now at a record high. Her business won the support of retired and off-duty police officers, lawmakers, teachers and other civic-minded Hong Kong residents. She's also getting visitors from the Chinese mainland offering support.

Her support for the police, however, has created tension in her family relationships, as her children did not agree with her political stance.

"People ask me whether I am afraid. I told them I was. Who wouldn't be afraid of being attacked or having their business destroyed?" Lee said.

Her story spread on social media. Her cafe was featured by an online food and restaurant guide on the mainland, drawing many people from the north. A few of her neighbors started to help out at the cafe to deal with her burgeoning business.

A mainland exchange student in Hong Kong, surnamed Wang, volunteered at Lee's cafe on the morning of Oct 26. "I want to do my bit because she is defending the city I love," the 22-year-old said.

Citing the difficulties that Lee has faced and the unfair reprisals, a 55-year-old retired police officer, surnamed Ip, said he was happy to see people stand up for police at a difficult time.

"I realized that I am not walking alone, after many other people spoke up for me," Lee said. She added that she feels distressed when other small restaurants continue to suffer because of a sharp decline in business amid the unrest.

Lawmaker Elizabeth Quat Puifan, who also dined at the cafe on Oct 26, said the city is in a terrible situation because many restaurants that openly support the police have been vandalized.

Lily Wong attended the same pro-police rally with her two sons and posted the photos online in late June. The single mother's snack bar in Tai Po, the New Territories, saw a hit in sales after being targeted by radical protesters who filed complaints against it with government departments. She also received hateful telephone calls late at night.

"I still welcome all diners, no matter what political views they have," said Wong. "Hong Kong will return to what it used to be - a city of peace and inclusiveness."

Annie Kwok, who worked as a flight attendant for 15 years, used social media to speak out against violence in mid-August after radicals assaulted two visitors and inconvenienced thousands of passengers when they held an illegal rally at Hong Kong International Airport.

Kwok and her food store in Sham Shui Po, Kowloon, were immediately targeted by radicals who fabricated complaints and conducted cyberbullying. Her business fell by a third within a few days.

The impact on her business reinforced her conviction that, for the future of Hong Kong, more residents need to stand up against intimidation and violence.