HONG KONG, July 1 (Xinhua) -- China's Hong Kong on Monday celebrated  the 22nd anniversary of its return to the motherland and the establishment of the Hong Kong Special Administrative Region (HKSAR) with various activities all over Hong Kong. 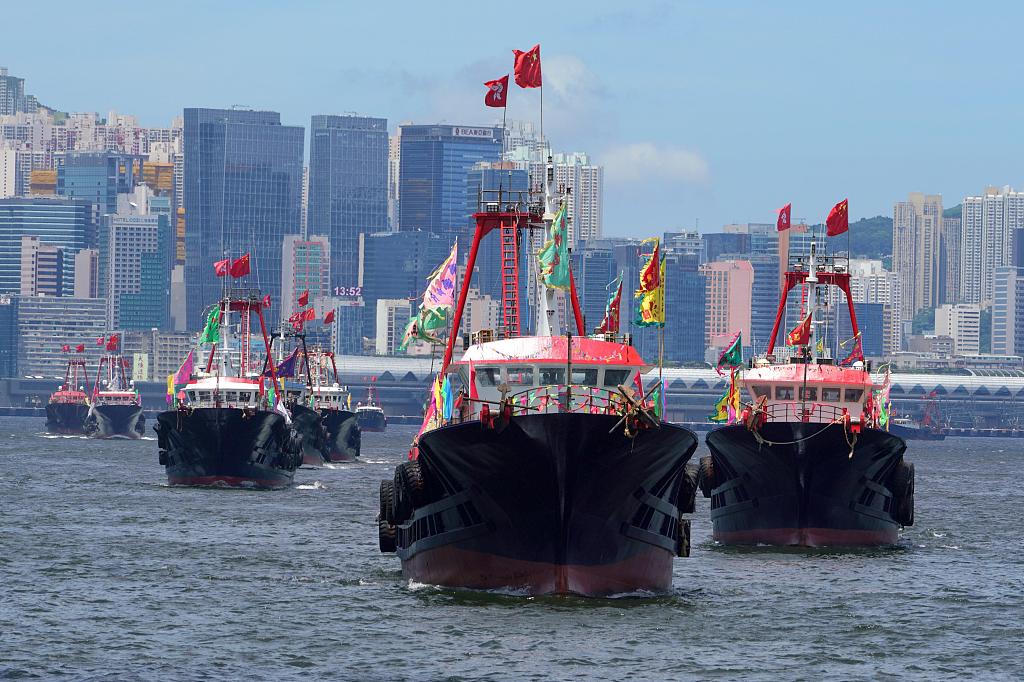 In her speech at the reception, HKSAR Chief Executive Carrie Lam said that Hong Kong remained stable and prosperous during the past 22 years despite some ups and downs. "Backed by the motherland and open to the world, Hong Kong has continued to leverage its unique advantages under 'one country, two systems'."

"To successfully implement 'one country, two systems' and capitalize on Hong Kong's various advantages to develop our economy and improve people's livelihood, we have to make plans together and work in concert," she said.

The Hong Kong Celebrations Association, a non-profit organization, has launched a string of activities in different parts of Hong Kong, including a three-day Greater Bay Festival at Victoria Park that features new technology, pop music and culture, sports and cuisines.

As a highlight of the festival, about 5,000 people gathered Monday morning at the park, wearing white or red caps, and spelled out "I LOVE HK" on a football field by lining up in the shape of the letters and a heart.

About 70 fishing boats with flags and slogans sailed through Victoria Harbor Monday afternoon. The Hong Kong Fishermen Consortium said it initiated the cruise to celebrate the 22nd anniversary for HKSAR and the 70th anniversary for the founding of the People's Republic of China, as well as to express the fishery sector's support for the police's recent efforts to maintain Hong Kong's rule of law and security.

As another highlight of the celebrations, three barracks of the Chinese People's Liberation Army (PLA) Garrison in the HKSAR held open day activities from Saturday to Monday, inviting the public to watch national flag-raising ceremony, march-past, military band performance and combat drill performance, and to interact with PLA soldiers.

The annual open day activities attracted more than 30,000 Hong Kong residents, many of them young students.

"I've never been on such a mighty warship," Wong Chun Yin, a high school graduate, said with excitement as he visited the PLA naval vessels at the Ngong Shuen Chau Naval Base, adding that he was aware of the country's rapid development and would like to learn more about the motherland's history and culture.