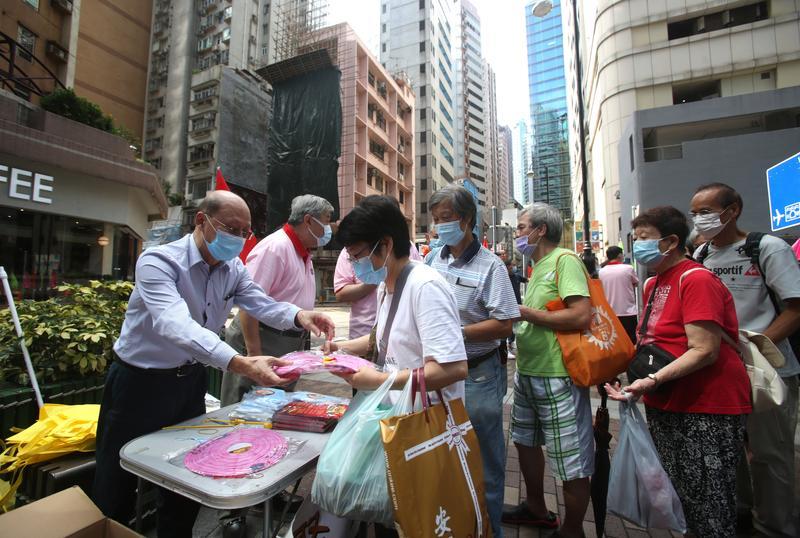 Residents collect lanterns at a booth in Hong Kong on Oct 1, 2020, the Mid-Autumn Festival. [PHOTO/PARKER ZHENG]

HONG KONG - With festivities taking place amid the flamboyant national flags fluttering across the city, Hong Kong residents celebrated in their own way the 71st anniversary of the founding of the People's Republic of China — the first National Day after the National Security Law came into effect on June 30.

Ng Sio-kok was among the thousands of volunteers at the city's 1,050 street booths set up across the city to mark the special day, which this year coincided with the traditional family reunion day — the Mid-Autumn Festival.

For Ng, this year's National Day was particularly special.

In her opinion, the majority of Hong Kong people this year share the same aspiration — the resumption of exchanges with the Chinese mainland as soon as possible. After the pandemic is under control, and trade and travel with the Chinese mainland can resume, most people in Hong Kong will be able to return to life as usual, and the city can return to prosperity, Ng said.

At a Wan Chai booth decorated by self-made banners and a variety of national and regional flags, Ng helped hand out masks and sanitizers to residents. Hong Kong's commercial district has seen the return of its usual hustle and bustle, as the pandemic has gradually come under control.

The masks and sanitizers, most practical gifts in Ng's eyes for local residents, are to remind them not to let their guards down amid the pandemic, the volunteer said. 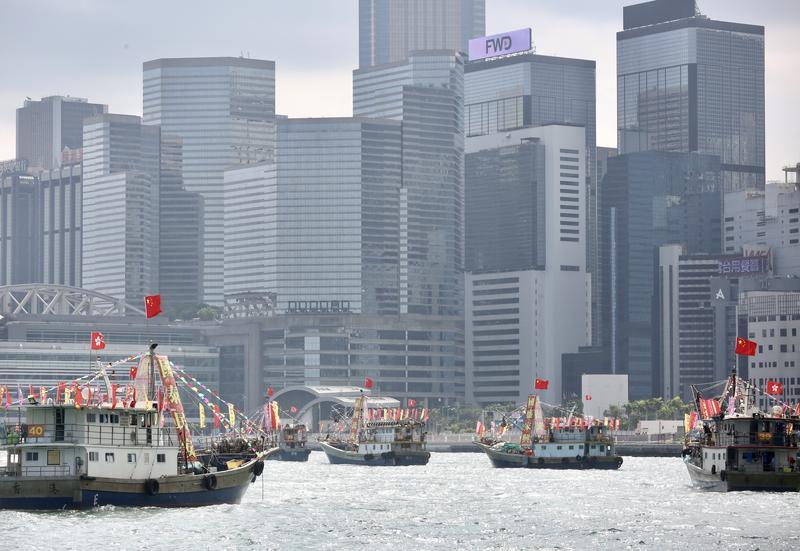 Boats sail across the Victoria Harbour with the national and Hong Kong Special Administrative Region flags fluttering atop as Hong Kong celebrates the 71st anniversary of the founding of the People's Republic of China on Oct 1, 2020. [RAYMOND CHAN / CHINA DAILY]

Cao, a four-year doctoral candidate in chemistry at the University of Hong Kong, also felt this year's calm and festive vibe, a contrast to last year's chaotic scenes on campuses during the social unrest.

Standing with his classmates at the city's central pier on Thursday to watch the parade, Cao said, "It feels like dawn for Hong Kong." They carried small national flags and waved to the parade.

The student is glad to see the city's campuses and society gradually returned to calm with the National Security Law coming into effect on June 30.

He recalled that in November, many students were forced to leave campus and even the city when the campuses of Hong Kong universities were occupied by the radical protesters. He said he was astonished to learn that 40 percent of those arrested in relation to the social unrest were students.

Also at Central Pier, Yu Yat-shing, a retired driver in his 60s, carried his full set of cameras and lenses to film the flyover and sea parade by Hong Kong's Disciplined Services — a National Day tradition of over 10 years.

Yu said he will use his lenses to record the annual parade on July 1 and Oct 1 every year to capture the festive moments.

Yu said he had been looking forward this year to looking from the distance at the fleet of the Chinese People's Liberation Army Hong Kong Garrison at the new Central Military Dock, which was handed over to the garrison on Tuesday.

Miles away, local resident Leung Chi-sum, 53, and his friends, clad in uniformed red tracksuits and national flags pinned on their shoulders, set out for a long-distance run from Sai Ying Pun on Hong Kong Island early in the morning. Their destination was the other side of Victoria Harbor, passing through Kowloon, and eventually on to Ma On Shan in the New Territories. One of the runners carried an electronic screen on her back, on which scrolling text praised the motherland.

They hoped the journey covering most of the city's bustling areas would add the bright sight of red flags to the city.

As a tribute to his country, Leung set a personal goal of running 71 kilometers—almost twice the length of a marathon — to mark the 71st birthday of the PRC.

Leung said he was heartened and touched when many residents cheered for them as they passed. He hoped the festive atmosphere in the National Day, including the event he organized, would also cheer up the city and inspire the public to have more confidence in its future.