The violence and chaos brought by secessionists in the Hong Kong Special Administrative Region (HKSAR) two years ago highlighted the dangers and risks of the internet and media to social stability and national security, Carrie Lam, Chief Executive of the HKSAR, said on Thursday, stressing that the HKSAR government will take necessary measures to strengthen guidance, supervision and management of media and internet. 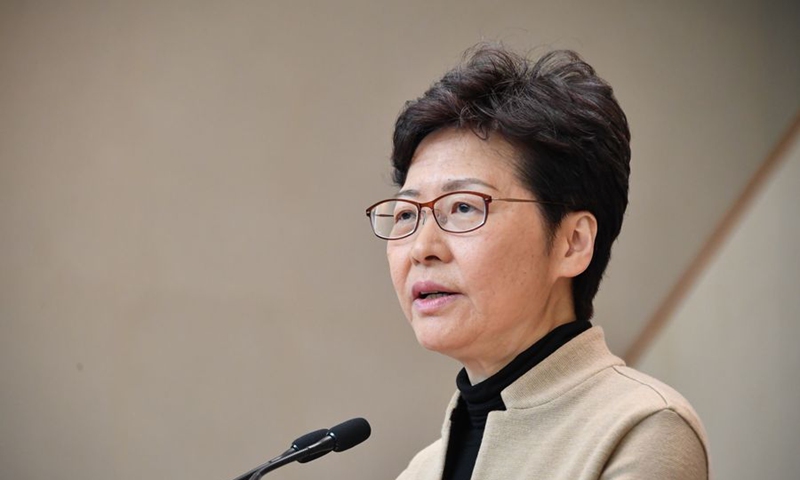 Lam addressed the opening ceremony of China Internet Media Forum in Guangzhou, Guangdong via video link. It is the highest, most authoritative and influential annual event in China's media industry.

She noted that the SAR government has paid more attention to online information, and corrected and clarified false information and is focusing on strengthening cybersecurity and combating technologies related crimes this year.

As for how to deal with fake news, Lam said the SAR government is studying the experience of other countries and regions before coming up with the best solution. As long as proper precautions are taken, the media can definitely play a positive role.

Lam said the SAR government is making full use of the internet and social media to call on more residents to participate in the upcoming Legislative Council（LegCo） election, which will be held on December 19. It will be the first LegCo election for Hong Kong after the city was brought under control following the chaos in 2019 and having its electoral system improved. The principle of "patriots ruling Hong Kong" was also implemented following the changes.

Some anti-China and anti-government media outlets have already stopped operating in Hong Kong.

On June 24, the secessionist tabloid Apple Daily closed amid mounting financial pressure. Some of its senior executives were arrested on suspicion of violating the national security law for Hong Kong.

Investigations showed that since 2019, dozens of articles published by Apple Daily had called for sanctions against Hong Kong and the Chinese mainland in both Chinese and English, according to previous reports. Its editor-in-chief and several other senior executives were accused of conspiracy to collude with foreign forces.

Chung Pui-kuen, editor-in-chief of Hong Kong digital news outlet Stand News, also announced on November 7 that he was stepping down from the position for family reasons.

Experts in Hong Kong told the Global Time previously that the decision was not surprising and signaled the end of an anti-government media whose legacy is its infamous role in the social unrest in Hong Kong.