CHINA HK delegation at US forum: HK act does no good but harm

HK delegation at US forum: HK act does no good but harm 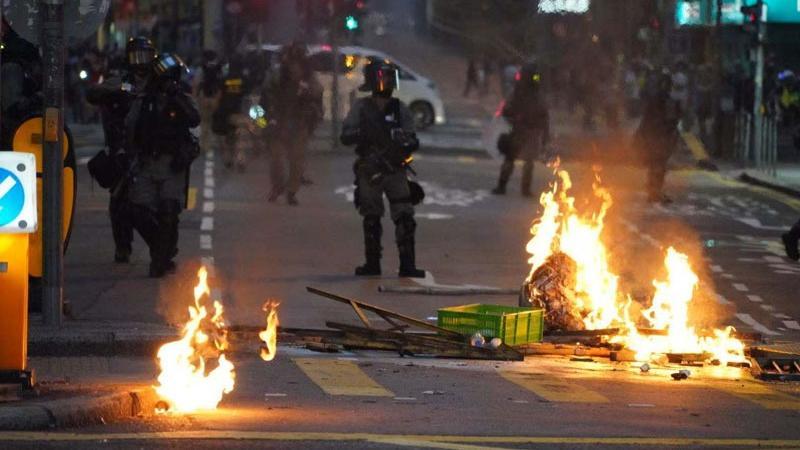 Debris burns as protesters set fires on the road during an illegal assembly in Hong Kong, Nov 2, 2019. (Photo: VCG)

HONG KONG - Hong Kong political heavyweights, including cabinet members, told a forum in the United States attended by US politicians and government officials that the Hong Kong Human Rights and Democracy Act has done nothing but harm by deepening the social and political divide in the city.

At a press briefing after returning to Hong Kong, Executive Council convener Bernard Charnwut Chan said that the Hong Kong delegation made it clear to the audience that the Act in question has generated "unnecessary concerns and conflicts" in a highly divided society.

The sanction mechanism under the bill has worried the business sector, including many US enterprises in Hong Kong, Chan added.

So far more than 1,300 US companies have their operations or regional headquarters in Hong Kong.

Three other lawmakers - Regina Ip Lau Suk-yee, Martin Liao Cheung-kong and Horace Cheung Kwok-kwan - were also invited to the four-day dialogue in California, which aimed to "deepen the mutual understanding and exchange" between US and Hong Kong.

All four of them are members of Chief Executive Carrie Lam Cheng Yuet-ngor's cabinet – the Executive Council. Three opposition lawmakers were also invited to the event organized by the non-profit World Affairs Council.

In attending the dialogue, Cheung, who is also vice-chairman of the Democratic Alliance for the Betterment and Progress of Hong Kong, set out on the mission of supplementing the voice of pro-establishment camp in Hong Kong's matters as it has been omitted in Hong Kong-related reports by the US.

By doing so, the US can view Hong Kong issues in a more objective and comprehensive manner, Cheung said.

He said, however, it was Hong Kong's stakeholders who should be accountable to solve the city's problems, while the US has no role to play in this matter.

Jonathan Fritz, deputy assistant secretary for China, Mongolia, and Taiwan Coordination Bureau of East Asian and Pacific Affairs of the US State Department, and Hanscom Smith, the US consul general for Hong Kong and Macao, were among those US officials attending the dialogue.