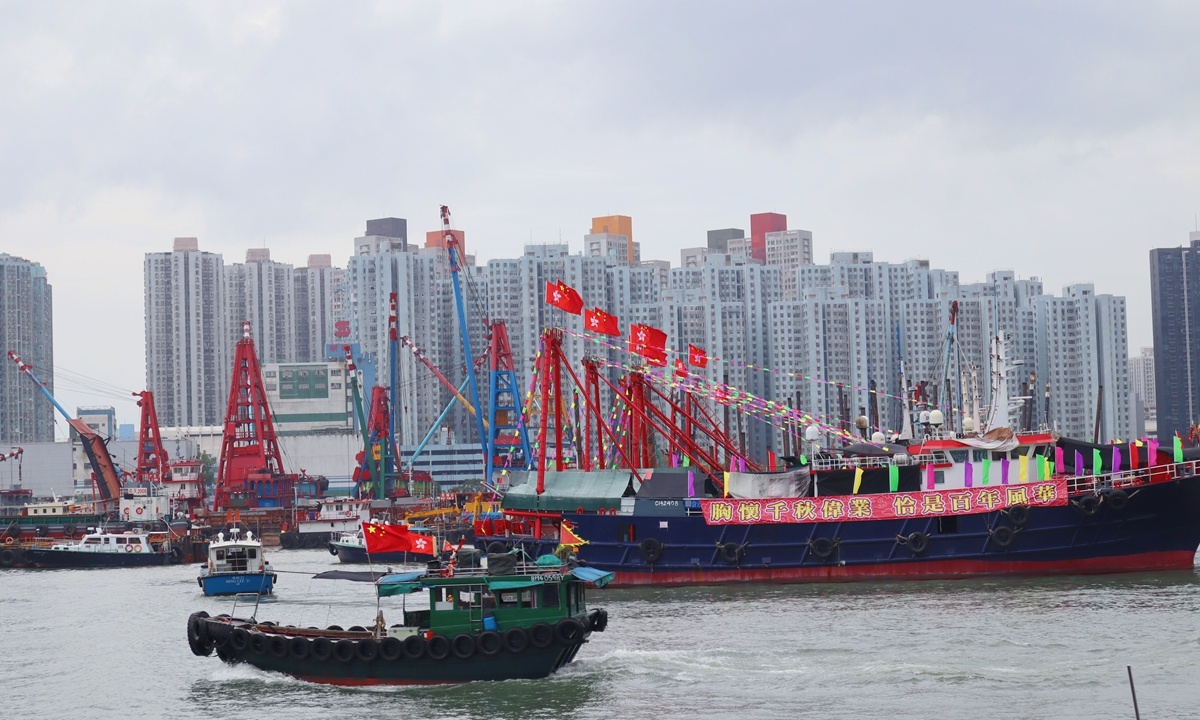 Photo taken on Monday shows vessels displaying China's national flag and the Hong Kong regional flag at the Castle Peak Bay Waterfront Promenade, Tuen Mun to welcome the 100th anniversary of the founding of the CPC and the 24th anniversary of Hong Kong's return to the motherland. (Photos: GT)

A delegation of over 60 senior Hong Kong public figures, led by Hong Kong Chief Executive Carrie Lam, arrived in Beijing on Monday to attend the celebration of the 100th anniversary of the founding of the Communist Party of China (CPC).

Representatives of various circles in the city, such as the Legislative Council and businesses, are also included in the delegation, which was scheduled to attend a 100th anniversary gala on Monday night at the Bird's Nest, or National Stadium, and return to Hong Kong on Thursday, Lianhe Zaobao reported.

For the first time, Hong Kong will celebrate the CPC's anniversary on an open and large scale, Lawrence Tang Fei, a member of the Chinese Association of Hong Kong and Macao Studies, also principal of Hong Kong's Heung To Secondary School, told the Global Times on Monday.

Tang said the CPC finally can enjoy the celebration of its birthday in the city openly, which can ensure a correct understanding of the fact that the CPC is the only ruling Party of China, and Hong Kong is part of China. Now patriots in the city can express their love and support for the Party and the country openly, Tang pointed out, noting this is a good start.

The CPC's centenary birthday falls on July 1, coinciding with the 24th anniversary of Hong Kong's return to the motherland. It also falls one day after the first anniversary of the implementation of the National Security Law for Hong Kong.

Thanks to the implementation of the National Security Law for Hong Kong, it is the first year that patriots in Hong Kong can freely attend activities to celebrate the CPC's anniversary and share their happiness with more people, Hoffman Ma Ho-man, a member of the National Committee of the Chinese People's Political Consultative Conference and member of the Hong Kong Culture Association, told the Global Times on Monday.

In some pictures the Global Times obtained from Jane Cheung - a youngster born on the mainland who now lives in Hong Kong - boats anchored at Hong Kong harbor are all decorated with both the national flag and the regional flag for Hong Kong.

Cheung said that on Thursday, she and her friends will attend celebration activities such as a light show and watch 1921, a Chinese film looking back on the genesis of the CPC during turbulent times. The film will be nationally released on Thursday. 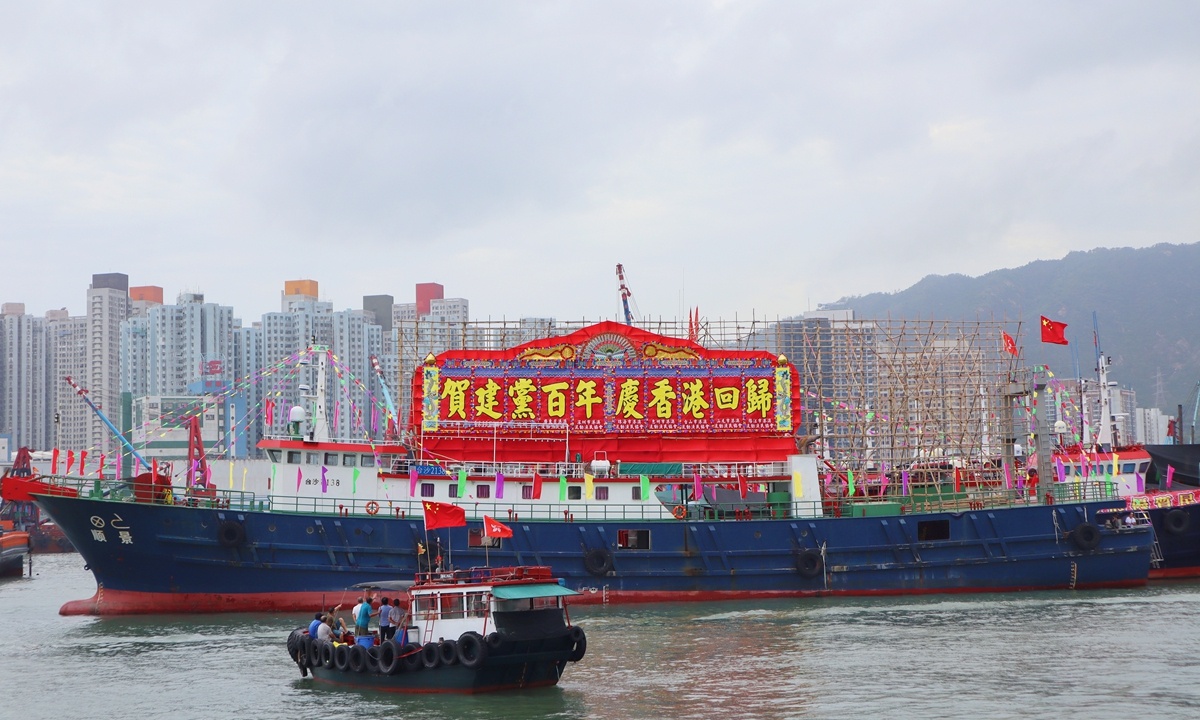 Photo taken on Monday shows vessels displaying China's national flag and the Hong Kong regional flag at the Castle Peak Bay Waterfront Promenade, Tuen Mun to welcome the 100th anniversary of the founding of the CPC and the 24th anniversary of Hong Kong's return to the motherland.

The historic high atmosphere and frequent celebration activities offer many youngsters in Hong Kong, who have lacked complete and objective learning of modern Chinese history, and those who were deceived by rioters to attend violent protests in 2019, with an opportunity to learn about the country's system and the Party.

Basa Leung, a Hong Kong youngster born in the 1990s, said that he was touched after watching Awakening Age, a 43-episode hit drama, which narrates the story of how the CPC was founded in 1921.

"I did not know much about the environment and atmosphere at that time. Only after watching the drama did I start to understand how heroic they [the CPC] were at that time to find a way out for China," Leung told the Global Times.

Due to a lack of complete and objective modern Chinese history education, and the indoctrination of the Western notion of democracy, Leung said that youngsters of his generation used to think that "only Western elections are of universal value" and "the Chinese government is authoritarian."

"It is definitely necessary for Hong Kong to reflect on how it can help Hong Kong youngsters learn about the concept of the CPC to better understand the development of China [in the modern era]," Hoffman Ma stressed.

There are very few channels in the city through which to access comprehensive and objective information about the CPC, Ma said, suggesting the inclusion of CPC management into compulsory lessons in Hong Kong schools.

Other Hong Kong observers reached by the Global Times agreed but said that it would take a long time to make up these "missing lessons" for Hong Kong youngsters.

Among Hong Kong youth, recognition of the CPC is roughly divided into two kinds. One knows little and the other holds a negative image. The lack of understanding of the development of the CPC and the Party's contribution to China and the world in education, and the misguidance by some media such as the secessionist tabloid Apple Daily, have cultivated such naive young people in Hong Kong, Tang said.

This year's celebration of the CPC's 100th anniversary is an important turning point and also a beginning for the city to publicize the contribution of the Party and its development, Tang noted.

As the big day approaches, some non-government organizations are holding activities to popularize knowledge of modern and contemporary Chinese history, as well as the CPC's history, Tang said.

Many schools in Hong Kong have started to organize students to raise the national flag and sing the national anthem on important days. After September 1, a course called Citizenship and Social Development, which is composed of three themes - "Hong Kong Under 'One Country, Two Systems'," "The Country Since Reform and Opening-Up" and "The Contemporary World of Interconnection" - will also mention the CPC as China's ruling party in its textbook, according to Tang.

Nixie Lam, a former district councilor in Hong Kong who also came to Beijing to attend the celebration, told the Global Times that Hong Kong residents have witnessed many of the country's achievements including recent ones in the anti-epidemic battle, eliminating poverty and space exploration, which were all obtained under the leadership of the CPC.

Among those, the most familiar achievement for Hong Kong residents is the implementation of the "One Country, Two Systems" policy, Lam said.

Action will demonstrate that no one knows better about "One Country, Two Systems" than the CPC, Hong Kong youth representatives reached by the Global Times said.