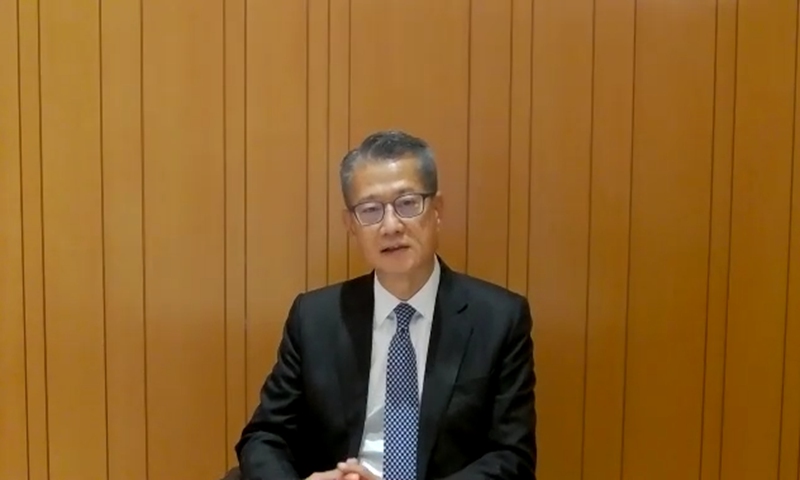 There's no need to ask for US consent on a decades-old exchange rate system linking Hong Kong's local currency and the US dollar, Hong Kong Financial Secretary Paul Chan Mo-po said on Wednesday, as the recent chase after Chinese assets underpins the strength of the local currency.

If the US takes actions against Hong Kong, the resulting repercussions would be felt by the US also, Chan said in an exclusive interview with the Global Times, noting that over-the-top sanctions tend to dampen confidence in the US dollar among various US asset holders.

The linked exchange rate system (LERS) was launched in 1983 and has been in place for over 30 years. The US Hong Kong Policy Act was not passed until 1992, Chan said, and it could be said that the system requires no US consent.

What matters most is whether Hong Kong has the capability to continue to put the system in mo-tion, the financial secretary said, citing the city's foreign exchange reserves of $440 billion - more than double its base currency in an indication of the city's power.

He also noted the city's banking system, which is known for its high quality and ample liquidity.

Capital adequacy ratios prevailing in local banks are at approximately 20 percent, well above the international standard of about 8 percent. The local banking system holds a liquidity coverage ratio of 160, far higher than the international requirement of 100 percent. Furthermore, the local stagnant and bad loan ratio stands at less than 0.6 percent, a fairly low level globally and quite low compared to levels seen in the city's history, according to Chan.

The central government's vigorous support for the city in the financial sphere also props up the city's financial strength, he said during the interview. "If needed, we can kick off [currency] swap agreements, exchanging Hong Kong dollars for US dollars."

The local currency has repeatedly tipped the strong end of its trading peg against the US dollar, prompting interventions by the Hong Kong Monetary Authority (HKMA) to defend the LERS.

The HKMA did not respond to a request for comment by press time.

The US has also benefited greatly from Hong Kong's financial prowess, according to Chan, and US insurers, asset managers, and those providing consulting services and launching IPOs for local companies mean the US is deeply integrated in the local market.

Additionally, Hong Kong is the third-largest foreign exchange trading hub globally, following Lon-don and New York. That means the Hong Kong market doesn't solely serve the local business community, but institutions and businesses across the Asia-Pacific region, Chan pointed out, adding that the interconnectedness of global financial markets would only subject the US to the impact of its moves against Hong Kong.