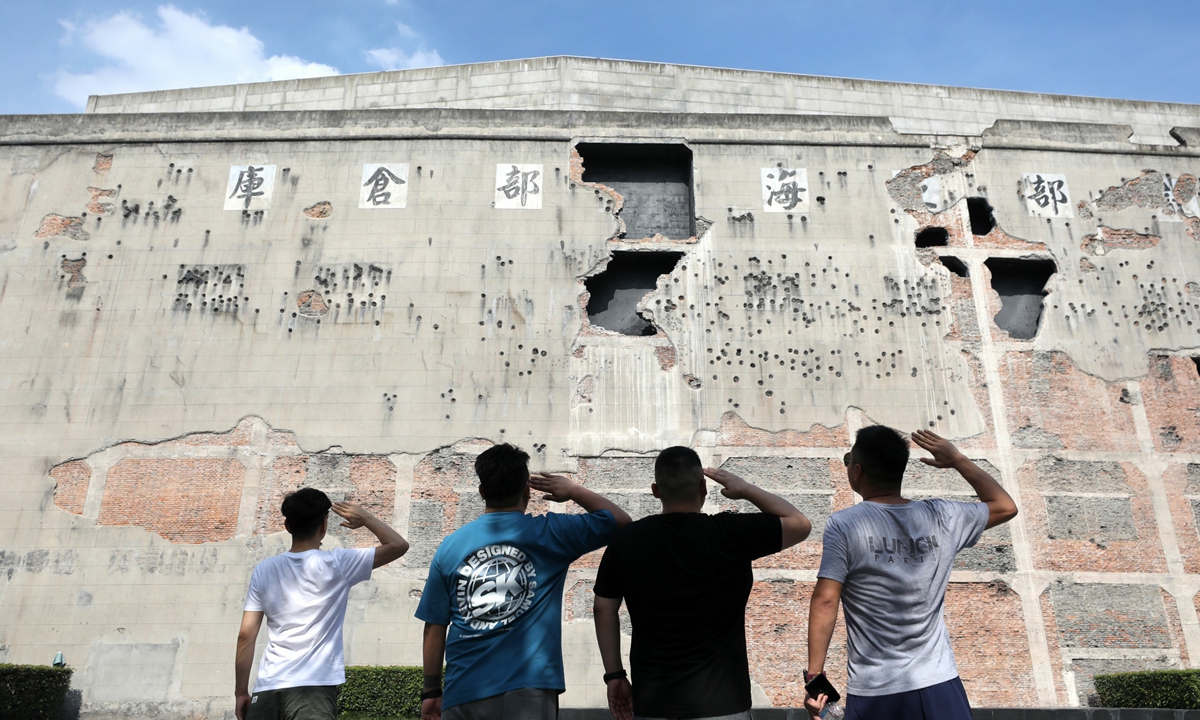 Shanghai residents salute a memorial wall of the Sihang Warehouse on Friday, where Chinese soldiers defended against the invading Japanese army, to remember the 75th anniversary of Japan's surrender in World War II on Saturday. (Photo: Global Times)

Hans Yeung Wing-yu, the secretary of the history subject committee of the Hong Kong Examinations and Assessment Authority (HKEAA), who is responsible for reviewing the exam questions, has applied for resignation, Hong Kong media reported, citing anonymous sources in the local education field.

Media previously revealed that Yeung had posted a great deal of content expressing hatred of the Chinese mainland and violating the Basic Law on social media platforms, alleging that his political stance had affected the formulation of the exam questions.

Keith Lo Ka-yiu, another HKEAA official who had reportedly posted similar posts and was involved in question formulation, had also resigned earlier and would officially leave office on Sunday, according to local media.

The resignations came about three months after the improper question appeared on the history test paper of the Hong Kong Diploma of Secondary Education Examination on May 14, asking examinees whether they agreed that Japan did more good than harm to China during the 1900-1945 period which covered the period of Japan's colonization of and invasion in China.

Analysts said such a question was as ridiculous as asking European students whether Hitler did more good than harm to Europe.

"Are there problems in the examination and assessment procedure or did some people fail in their duties? If it's the former, the procedure should be reformed; if the latter, the officials involved should be punished," Wong Kam-leung, chairman of the Hong Kong Federation of Education Workers, told media.

The HKEAA had cancelled the improper question soon after it caused a flood of criticism among the public, and launched a thorough investigation. The investigation results have not yet been released.

Saturday marked the 75th anniversary of Japan's unconditional surrender in World War II, during which the war of aggression initiated by Japan brought untold suffering to people in Asia. China alone suffered 35 million casualties and $600 billion in economic losses in the War of Resistance against Japanese Aggression.

Following the incident, educational experts and observers have called on the Hong Kong education authority to strengthen supervision of its curriculum and examinations and positive-value oriented education should be higher weighted in the curriculum.

There have been calls for the education authority to announce the investigation results and take appropriate measures.