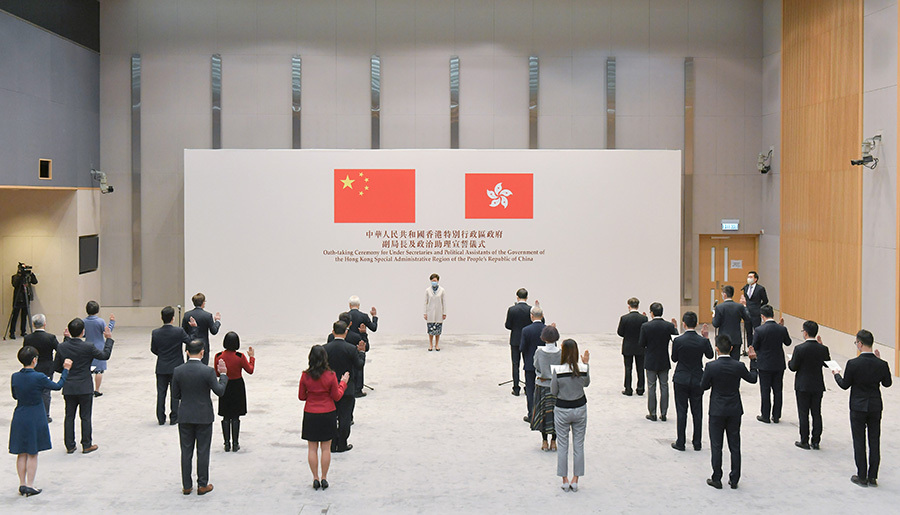 A group of 26 high-ranking Hong Kong government officials swore an oath of allegiance to the special administrative region and its Basic Law on Wednesday.

All of the SAR's 12 under secretaries and 14 political assistants attended the oath-taking ceremony, which was witnessed by Hong Kong Chief Executive Carrie Lam Cheng Yuet-ngor at the Central Government Complex.

A similar ceremony for permanent secretaries and heads of department will be held on Friday.

According to the Basic Law, all of the SAR's public servants must be dedicated to their duties and be responsible to the SAR government. As key members of the governing team, it is incumbent upon the under secretaries and political assistants to uphold the Basic Law and bear allegiance to the HKSAR, according to a government statement.

Taking the oath, the officials "made a solemn promise on their responsibilities, genuinely showing to the community their loyalty and commitment to the Basic Law and the HKSAR and thereby boosting the public's confidence in officials", said the government statement.

In late November, Secretary for the Civil Service Patrick Nip Takkuen announced that all of the SAR's 18,000 civil servants were required to swear allegiance to the SAR and uphold the Basic Law. High-ranking officials were required to take oaths, and junior level were asked to sign declarations.

Principal officials, including the chief executive, three department secretaries and 13 bureau directors, all took oaths when assuming office. In addition, 2,980 civil servants who took up their posts on and after July 1 have made the declaration so far.

The Civil Service Bureau will soon issue details of the arrangements for requiring serving civil servants to sign the declaration.

The arrangement followed the promulgation of the National Security Law for Hong Kong in June. According to Article 6 of the law, residents standing for election or assuming public office must confirm in writing or take an oath to uphold the Basic Law and swear allegiance to the HKSAR.

By early April, 42 civil servants had been suspended over their participation in unauthorized assemblies held during the unrest that started in June 2019, which began amid protests against the now-withdrawn extradition bill and turned into months of street violence.