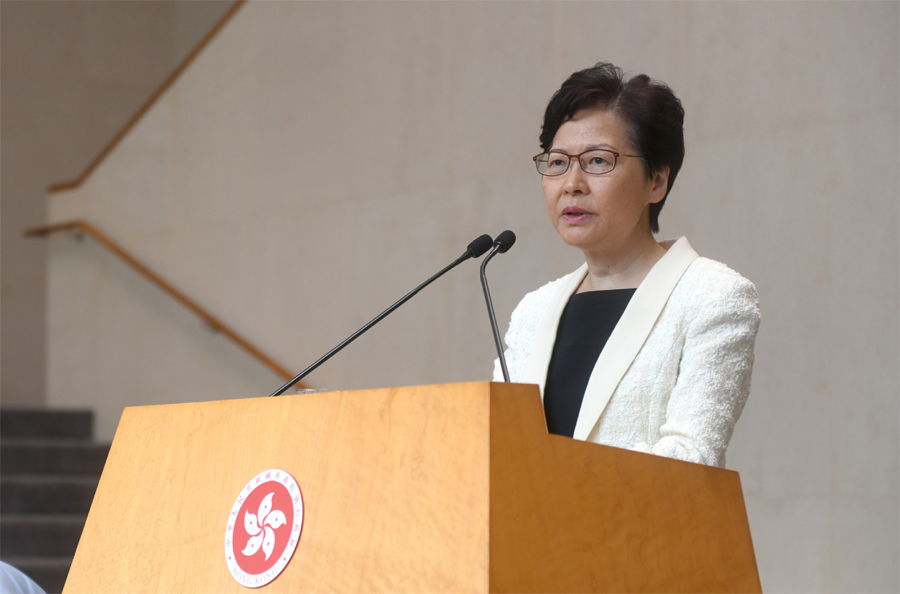 Hong Kong Special Administrative Region government will have discussions with the city's district councilors to find ways of bringing an end to the civil unrest that has torn the society apart in recent months.

The invitation to community leaders, extended by the SAR government on Friday, was the latest move by government to heal the rift.

Chief Executive Carrie Lam Cheng Yuet-ngor had earlier met with business representatives and youth groups to listen to their suggestions.

These meetings are part of a bid to lay the groundwork for an open discussion platform for people from all walks of life.

Lam and her principal officials will meet the city's district councilors next Wednesday at government headquarters.

The invitation was welcomed by many district councilors, who said it is an opportunity to share opinions they have gathered at a grassroots level with the government amid an atmosphere of mistrust and misinformation that permeates society.

Bunny Chan Chung-bun, chairman of the Kwun Tong District Council, said district councilors are on the frontline serving residents and it is their job to set aside differences and reflect the real concerns of residents in their communities to the chief executive.

Chan, a former chairman of the Youth Commission, said understanding people's opinions will help the government to better implement its policies to help bridge the division in society.

Chan stressed that as elected officials, district councilors have the duty and responsibility to convey public opinion to government.

"Dialogue is better than dispute," said Derek Hung Chiu-wah, member of Yau Tsim Mong District Council, adding that it is unwise of pro-democracy councilors to protest or disrupt order at the sessions, which may deprive others of the chance to voice their opinions.

Earlier, Lam also revealed that she will go with her governing team to talk directly to the people in different communities.

Ngan urged that the chief executive and her bureau chiefs should start direct talks with residents as early as possible in order to adopt more feasible policies in the future.