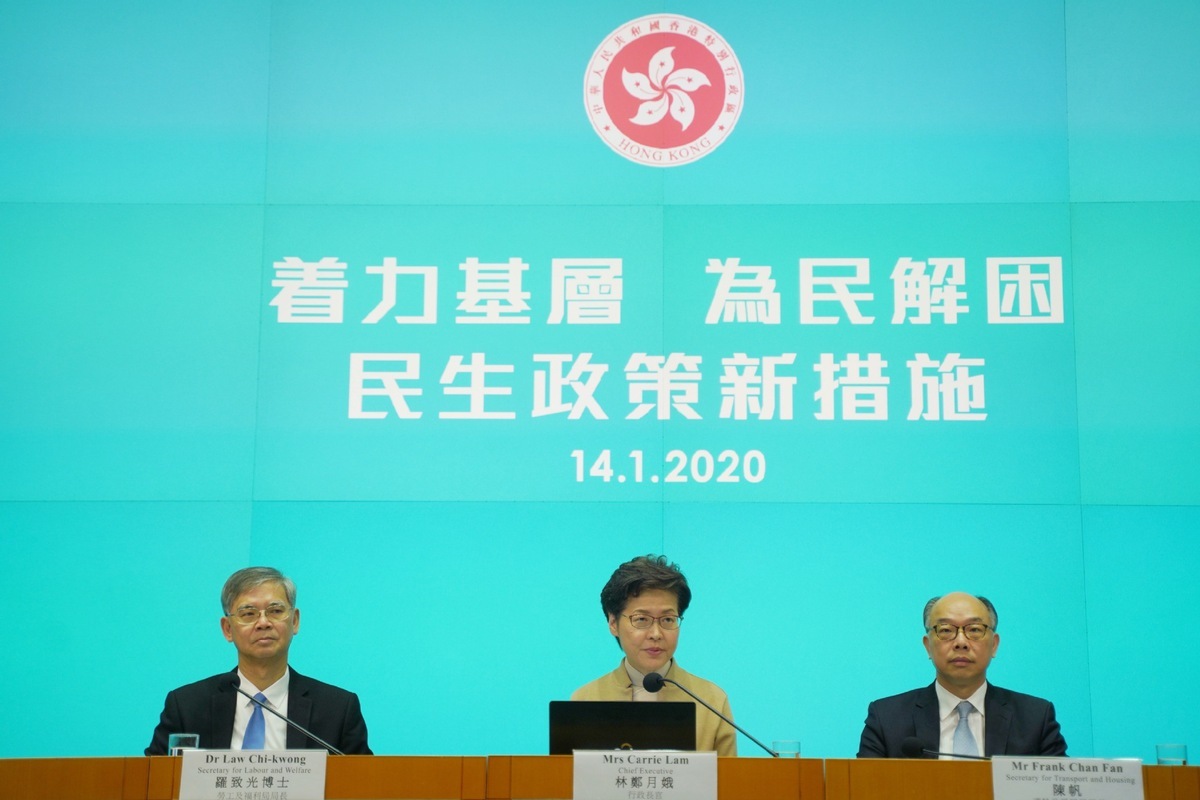 The government of Hong Kong Special Administrative Region will spend an additional HK$10 billion ($1.3 billion) to relieve the hardship of senior residents and low-income families during the current economic downturn.

Local representatives for concerned groups welcomed the government's plans, describing them as an important breakthrough that will enable Hong Kong to better assist its growing aging population.

Announcing 10 initiatives on Tuesday, Chief Executive Carrie Lam Cheng Yuet-ngor said the package of relief measures is expected to benefit over 1 million people, involving HK$10 billion. The recurrent expenditure will go up by 2 percent as a result. The time frame for the programs' expenses was not specified.

Lam explained that there is a practical need to improve Hong Kong people's livelihoods during the recession and social unrest.

The cap on the total value of assets that an elderly person can have to be eligible to apply for this allowance has been raised to HK$500,000, Lam said. The new program will cost the government HK$5 billion.

The SAR government also will lower the age threshold from 65 to 60 years old to be eligible to use public transportation at HK$2 per trip. This will contribute an extra HK$1.7 billion to the government's expenses, Lam said. An additional 576,000 people will benefit.

In addition, to improve working conditions, the government has proposed increasing the number of statutory holidays, or labor holidays, from 12 to 17 days a year, Lam said.

At present, statutory holidays for about 30 percent of workers in Hong Kong do not include Easter Sunday, Buddha's birthday, nor the first weekday after Christmas Day.

Furthermore, under the Mandatory Provident Fund Scheme, the government will pay the 5 percent mandatory contributions for employees with a monthly salary below HK$7,100 at an estimated cost of HK$600 million.

Since August, the government has launched four rounds of relief measures worth about HK$24 billion annually to help people cope with economic hardship.

In a meeting with the press on Tuesday, lawmaker Kwok Wai-keung from the Hong Kong Federation of Trade Unions — the largest group representing the city's labor sector — praised the new measures. He said they will help Hong Kong deal with its growing aging population and widening wealth gap.

To ensure their efficient implementation, Kwok suggested the government simplify the application procedures for benefits. This will not only improve people's willingness to apply for them, but will also reduce the government's administrative costs.

At another press meeting, lawmaker Holden Chow Ho-ding from the Democratic Alliance for the Betterment and Progress of Hong Kong also expressed support for the initiatives, saying some of them are innovative and visionary. The DAB is the largest political party in the city's Legislative Council and had served the needs of the grassroots for a long time.

To offer timely support, he urged the government to reveal more details of these measures and a specific timetable for implementation as early as possible.