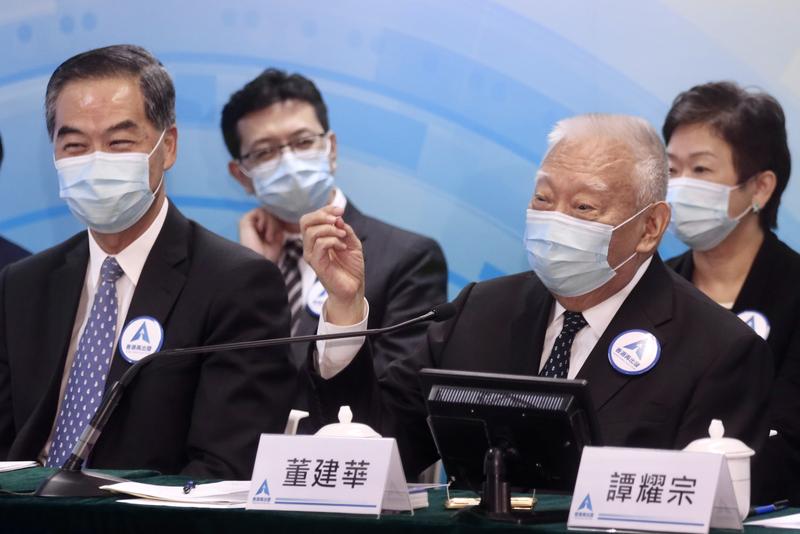 HONG KONG - Two former top leaders of the Hong Kong Special Administrative Region (HKSAR) on Monday expressed their faith in the city's future development, saying that now is a good time to give its strengths full play given the opportunities offered by the nation's 14th Five-Year Plan (2021-25).

Their remarks came as the Hong Kong Coalition celebrated its first anniversary. The non-governmental organization is co-convened by Tung Chee-hwa and Leung Chun-ying — both former HKSAR chief executives who now serve as vice-chairmen of the National Committee of the Chinese People's Political Consultative Conference, the nation's top advisory body.

The 1,500-member coalition aims to uphold the "one country, two systems" principle and promote the HKSAR's prosperity by supporting the city's full integration into national development.

Tung said that the HKSAR has gone through positive changes in the past year, adding the country's fast development even during the COVID-19 pandemic has given the HKSAR a big boost, especially in the field of technology and innovation.

Leung said that to support the city, the coalition will continue to help the HKSAR actively participate in the development of the Guangdong-Hong Kong-Macao Greater Bay Area, with the focus on deepening cooperation between the HKSAR and Chinese mainland.

Detailing the work, he said that investigations will take place to understand the respective situations of each side, followed by further communication on each city's needs and advantages, before finally achieving solid results.

To accelerate the exchanges, the coalition will hold several symposiums in mainland cities in the following year, including Shanghai and cities in Fujian and Hunan provinces.

In addition, a series of feature films, short videos and advertisements will be delivered on various TV stations, such as Phoenix Television and Asia Television, to boost the HKSAR's image, which was adversely affected by the social unrest in 2019.

Other works include introducing law education for students, organizing youth exchange activities on the mainland, and enlarging the number of coalition co-founders if necessary.

The Hong Kong Coalition was founded on May 5, 2020, in response to the need to revive the HKSAR's economy, which was hammered by the pandemic and the social unrest in 2019. Tam Yiu-chung, a member of the National People's Congress Standing Committee, is secretary-general of the cross-sector organization.