Festive vibes spread across Hong Kong on Sunday with citywide celebrations to mark the 22nd anniversary of the city's return to the motherland. 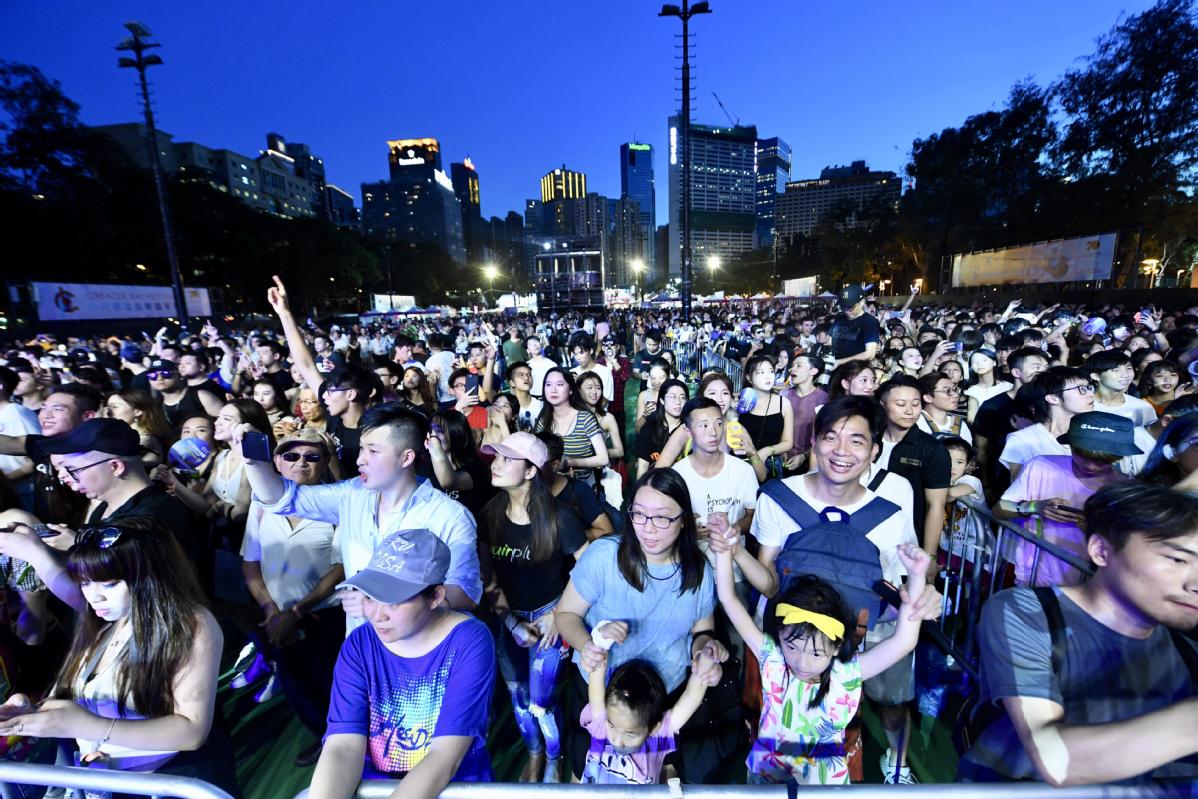 Speaking at the launch of a three-day gala in Victoria Park that features high-tech and innovations－the largest celebration event happening in the city－Chief Secretary for Administration Matthew Cheung Kin-chung said the Hong Kong Special Administrative Region government wants to promote innovation and technology.

It has invested more than HK$100 billion ($12.8 billion) in innovation and technology, Cheung said.

Apart from offering hands-on experiences with gadgets, the gala features music concerts, trendy culture, a food festival and a special area for young people to showcase their creative ideas.

The fiesta, which started on Saturday, had attracted more than 60,000 visitors up to Sunday afternoon. It was one of some 360 celebrations held by the Hong Kong Celebrations Association, which is made up of 40 social groups from various sectors.

The association estimated that more than 300,000 Hong Kong people would take part in them.

People of all ages were seen snaking through the venue, event by event and booth by booth, to try out advanced high-tech products featuring virtual reality, 5G telecommunications and artificial intelligence.

Tsang, who had a go at controlling the robot, was awed by the advanced product and said he enjoyed the experience, adding that he had never seen such a device before.

In addition to the high-tech exhibition and food booths, music concerts by international and local pop singers are also being staged in the park every night during the festival.

This year also marks the 70th anniversary of the founding of the People's Republic of China, which Chan said would attract more people to spread the festivities throughout the city.

The array of celebrations will also broaden and deepen Hong Kong resident's knowledge about the nation, Cheung said on Sunday.

With the dual advantages given under "one country, two systems", Cheung said, Hong Kong has made great contributions to the country's development, while the nation's prosperity has brought benefits to the SAR.

Also attending the ceremony, He Jing, deputy director of the Liaison Office of the Central People's Government in the HKSAR, said that a powerful nation will provide more opportunities for Hong Kong.

Apart from the celebrations held by social groups, many citizens opted for other places to celebrate the return of the city to the motherland－the three barracks of the People's Liberation Army Hong Kong Garrison in Shek Kong, San Wai and Ngong Shuen Chau. The barracks are expected to receive some 30,000 Hong Kong residents during the three-day open day event.

Visitors to the barracks can see combat performances and military demonstrations, as well as weapons and military equipment including armored scout cars and helicopters.

Unlike the two other barracks, Ngong Shuen Chau－the PLA's naval base in Hong Kong－opened to the public on Sunday. High school student Zhong Yaoyu felt excited to be stepping into the barracks for the first time.

"The soldiers are friendly and I am proud of the country," Zhong said.

On Monday morning, top SAR government officials and representatives from different sectors will attend a flag-raising ceremony at Golden Bauhinia Square in Wan Chai. Chief Executive Carrie Lam Cheng Yuet-ngor will then officiate at a reception to celebrate the 22nd anniversary of Hong Kong's return.