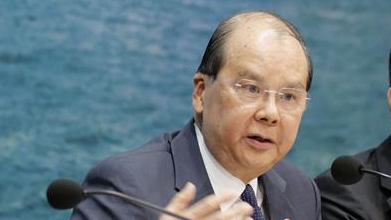 Cheung said the government's decision has no connection to the six-month-long protests, which saw students' involvement and even some prestigious universities in the city turning into battlefields between rioters and the police force.

"It's not the government doesn't want to do it (approve the requests) and it's not to target or punish any universities," Cheung clarified, saying the decision aims to buy more time to fully explain those proposals to councilors so that they would have a higher chance to pass the Legislative Council.

When asked about the restoration of the PolyU following the weeks-long siege, Cheung said the SAR government would assist if it's needed after thorough evaluations were done by the university itself.

Cheung has called the young people not to ruin their future by breaking the law and asked all parents, families, schools, government and the whole society to take the responsibilities to bring up the next generation.

Protesters, mostly young people, are continuing their rally near Legislative Council Building on Saturday, the first weekend after the Hong Kong district council election. CGTN's Zhao Yunfei has the latest information from the scene.