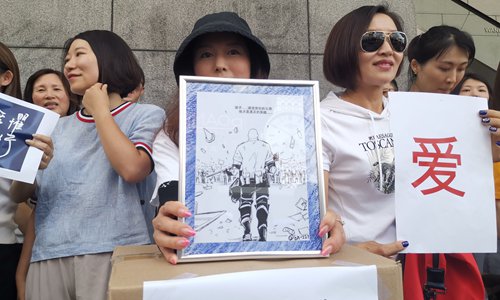 Some Hong Kong parents and police groups filed a complaint against some teachers who were allegedly feeding their children with hatred toward the Hong Kong Police Force, and spreading stories about police brutality on Monday, vowing to take the incident seriously.

A mother of a kindergarten student sent a letter on Monday to Lam Chi-wai, chairman of the Junior Police Officers' Association of the Hong Kong Police Force (JPOA), which said that her five-year-old child, who is in K3 grade, had a face-to-face interview at Hong Kong University Graduates Association (HKUGA) Primary School and was told "the police officers are bad guys," according to an email seen by the Global Times.

"My husband and I are shocked and outraged as my family supports the police. My child is only five years old with an immature mind and unable to tell right from wrong. We disagree that teachers talk about political topics in kindergarten," the letter said.

Lam confirmed with the Global Times on Monday he had received the letter, and "would seriously look into the incident."

"This was not the first time teachers had spread hatred toward police in school. Some of my colleagues have encountered the same problem before," he said.

The association reported the incident to the Hong Kong Education Bureau, and is also willing to provide evidence on similar cases, Lam noted.

Some teachers, even in kindergarten, have been feeding students with their distorted political stance, which is "very irresponsible," Lee Mei-ling, a resident in Kwun Tong district, told the Global Times on Monday.

"Some teachers told students that police attack ordinary people. They are not punished for inappropriate words, as schools claimed such teachers have the 'freedom of speech,'" she said.

Anti-government groups have been distorting the narrative of police law enforcement during months-long protests in Hong Kong, claiming that Hong Kong police, long known as "Asia's finest," are now losing the trust of the Hong Kong people. Some protesters shouted hateful slogans toward the police during the clashes.

"It's sad that teachers only tell students police targted people without explaining the reason," a mother surnamed Ching told the Global Times on Monday.

Neither the Education Bureau nor HKUGA Primary School has responded to a request sent by the Global Times as of press time on Monday.

Junius Ho Kwan-yiu, a pro-establishment legislator, recently launched a non-official supervision group to inspect schools, which he said is a necessary measure amid ongoing social unrest.