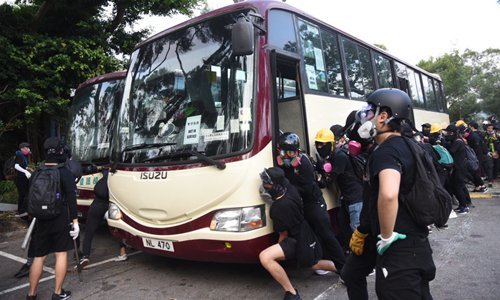 The China University of Hong Kong (CUHK) turned into a war zone on November 12, 2019, dominated by a huge fire and smoke, road barricades and fierce confrontation between rioters and police. (Photo: Web)

The Hong Kong Police Force (HKPF) arrested at least eight people on Monday who were involved in the pro-secession parade in the Chinese University of Hong Kong (CUHK) on November 19, including District Council member Eason Chan Yik-shun and CUHK graduate Arthur Yeung.

The HKPF said at a news conference on Monday afternoon that the eight men aged 16 to 34 were reportedly students, social workers and two District Council members, all of whom were arrested for allegedly assembling without authorization. Three of them are also suspected of inciting secession. The police said they will continue to investigate the case and do not rule out the possibility of more arrests.

On November 19, dozens of students from CUHK turned their graduation ceremony into a parade to commemorate the pro-secession protests involving violent clashes that led to yearlong social turmoil in 2019.

The graduation ceremony was meant to be held online due to COVID-19 epidemic concerns. However, dozens of students said they were organizing their own offline ceremony and started a parade in the campus. Some of the graduates posed pictures, waved flags and showed slogans from last year's riot. The university authority reported the situation to the police and condemned the students' "illegal acts and irresponsible behavior." Later, the case was passed on to the HKPF's national security department.

Both the Hong Kong Special Administrative Region government and the Liaison Office of the central government slammed the rally, calling it "a blatant violation of the National Security Law and criminal damage at the campus," and urged speedy handling of the case in accordance with law.