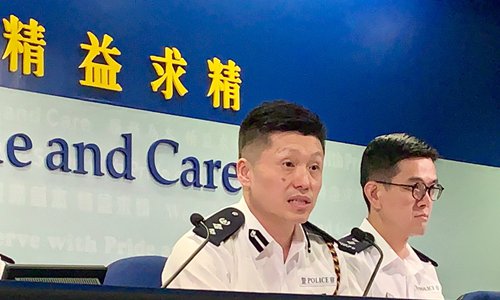 Hong Kong police dismissed Amnesty International's biased report on police, saying it is out of context and neglected the fact that police only use force  when facing violence.

"The use of force by police shall be the minimum necessary to contain the situation," said Tse Chun-chung, Chief Superintendent of the Police Public Relations Branch. "Its allegations are out of context, and let me reiterate: If protesters don't use violence, police won't use force."

Hong Kong has been beleaguered by frequently violent protests over the past three months, as the police have made 1,474 arrests, with 207 of them having been charged.

To date, 250 police officers have been injured by the protesters. But rumors have swirled to disturb the police's work, as some of them include serious but unverified accusations.

"They made serious accusations against the police but offered no credible evidence. The rumors have affected the citizens' confidence in the Hong Kong police. I hope the public will not be affected by these malicious rumors," said Tse. "We haven't received any formal complaint to the police watchdog [over the accusations] yet."

Police also called for peaceful actions as prominent Hong Kong lawmaker Junius Ho has called on citizens to pull down disgraceful graffiti and Post-it notes in the city, which might lead to a possible confrontation with the protesters.

"The police do not tolerate violence and we are politically neutral," Tse said. "We respect the citizens' right to express their views peacefully but not violently."

Protesters are also planning to obstruct public transportation toward Hong Kong airport again on Sunday, and police warned the move could be considered in contempt of court.

A Hong Kong high court has issued an injunction which restrains people from unlawfully and willfully obstructing or interfering with the proper use of the airport.

Passengers with a valid ticket or boarding pass for a flight in the next 24 hours and a valid travel document may enter the terminals, according to the Hong Kong Airport Authority.

"Some people fabricate boarding passes and sell them online. We are following the cases," said Lau Wing-kei, Deputy District Commander of the Airport District. "We have also made contingency plans for possible incidents."