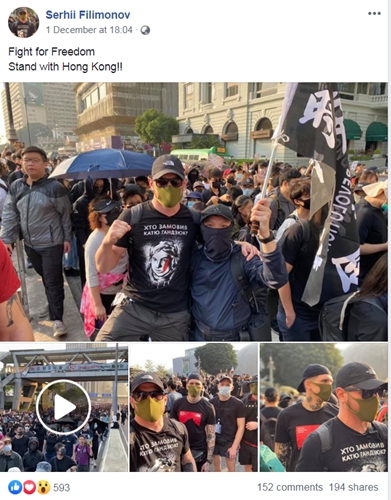 Serhii Filimonov, one of the Ukrainian men, posts on Facebook photos of them joining the anti-government protests in Hong Kong. (Photo: Global Times)

Hong Kong police said they are investigating several alleged Ukrainian neo-Nazis, who have reportedly gained the support of the Central Intelligence Agency (CIA) and participated in anti-government protests in the city that triggered public panic.

The investigation is underway and there are no findings yet, a spokesperson of Hong Kong police told the Global Times on Wednesday.

An officer from the Immigration Department of the HKSAR government told the Global Times on Wednesday that people with Ukrainian passports are granted visa-free entry and can stay in Hong Kong for up to 30 days. If they commit a crime, they will be arrested and face charges, the officer noted.

Russian media outlet Sputnik reported on Monday that leaders of far-right Ukrainian groups that rose to prominence in the 2014 coup d'etat they helped orchestrate, including the Azov Battalion and Right Sektor, have recently traveled to Hong Kong to participate in the protests.

The report said several members of those who came to Hong Kong have neo-Nazi tattoos.

One of the members is Serhii Sternenko, who headed the Odessa section of Right Sektor in Ukraine when it torched the Trade Unions House on May 2, 2014, killing 42 people and injuring hundreds in the street violence, the Sputnik report said.

However, Free Hong Kong Center, a Ukrainian Facebook account that supports the riots, posted a "clarification" statement on Tuesday, saying that these people visiting Hong Kong are "against Nazism" and the neo-Nazi image is a traditional Ukrainian symbol.

The statement said they were connected to the Ukrainian paramilitary Azov Battalion, which gained notoriety after allegations emerged of torture and war crimes, as well as neo-Nazi sympathies and usage of associated symbols. The New York Times on July 7, 2015, called the Azov group "openly neo-Nazi" in a report titled Islamic Battalions, Stocked with Chechens, Aid Ukraine in War with Rebels.

Chinese netizens are demanding that police find out why those people came to Hong Kong and what they plan to do in the city.

Some also worried that the group could incite greater violence in Hong Kong.

According to the Facebook page of Serhii Filimonov, one of the group members, they arrived in Hong Kong on Sunday. Filimonov wrote on Sunday that "Hong Kong welcomed us as relatives," sharing a video of himself and his partners in the city. He also posted a photo showing him with a black-clad protester at a rally.

Netizens discovered through Filimonov's video that one of his partners appeared to be masquerading as a journalist with a press card.

His Facebook page also showed on Monday that four members went to Hong Kong Polytechnic University, which turned into a warzone as clashes between rioters and police moved to the campus in November.

A freelance writer named "Hong Kong Hermit" tweeted on Monday, warning the public that the neo-Nazi fascists have turned up in the city, which is "the worst of the worst."

Junior Police Officers' Association Chairman Lam Chi-wai was quoted by wenweipo.com on Wednesday as saying that police officers have seen many foreigners participate in protests but have yet to identify the foreigners' roles and purpose.

Lawrence Tang Fei, a member of the Chinese Association of Hong Kong and Macao Studies, told the Global Times that the interference of foreign powers, including the US, have long existed in Hong Kong.

The Chinese Foreign Ministry announced the first wave of countermeasures against the US on Monday, suspending visits of US warships and aircraft to the city and sanctioning multiple US-headquartered nongovernmental organizations, including the National Endowment for Democracy (NED) and Human Rights Watch.

"In the three years before the 2014 coup, the CIA-backed NED sunk $14 million into regime change efforts in Ukraine, and the NED has been cultivating anti-Beijing attitudes in Hong Kong since the mid-1990s before the territory was returned to Chinese rule by Britain," the Sputnik report said.