CHINA HK police reports 27.9-pct rise in crimes in first half of 2020, warns against social turmoil

HK police reports 27.9-pct rise in crimes in first half of 2020, warns against social turmoil 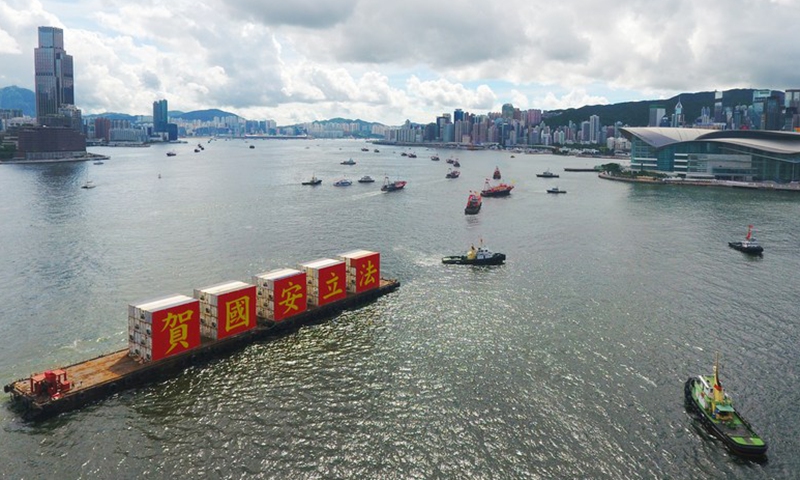 A ship carrying the slogan of "celebrating the passage of the Law of the People's Republic of China on Safeguarding National Security in the Hong Kong Special Administrative Region (HKSAR)" sails at the Victoria Harbour in Hong Kong, south China, July 1, 2020. (Photo: Xinhua)

HONG KONG, July 29 (Xinhua) -- Crimes recorded in Hong Kong in the first half of 2020 increased by 27.9 percent year on year, attributable to violent incidents in the social unrest since last June, Hong Kong police said on Wednesday, warning that Hong Kong's stable law and order situation has been severely challenged by turmoil and social dissension.

The police said the increase was attributable to crimes in the social unrest arising from the now-withdrawn ordinance amendments concerning fugitive transfers since last June. These crimes, including arson, criminal damage, offences against public order, possession of offensive weapons and possession of unlawful instrument, totaled a rise of 1,479 cases or 52.1 percent.

Among theses crimes, arson cases increased by 85.2 percent, offences against public order such as riots and unlawful assembly rose by 7.1 folds, and cases of possession of offensive weapons and possession of unlawful instrument increased by 53.1 percent and 5.3 folds respectively.

As the negative factors of the violent incidents in relation to the social unrest have not yet fully subsided, the disobedience to law among some members of public is growing, economy is worsening and community-wide mask wearing has enabled criminals to conceal their identities more easily, it is difficult to restore the law and order situation to the level before last June within a short period of time, the police said.

Since last June, protests have become increasingly violent. In November, a man was set into fire by rioters in Ma On Shan, and another man was killed by bricks hurled at his head by rioters in Sheung Shui, according to the police.

The situation further escalated when rioters "hijacked" the school campuses of the Chinese University of Hong Kong and the Hong Kong Polytechnic University in the same month. In the riots, the number of petrol bombs hurled and level of violence used by the rioters were unprecedented, the police said.

Moreover, there are extremely violent groups using genuine firearms and explosives intended to kill police officers or force the government to accede to their so-called "demands," the police said, adding that they have arrested 83 persons in connection with 15 explosives and five genuine firearms cases, and 32 of them have been prosecuted.

In order to prevent, suppress and impose punishment on criminal acts which endanger national security, the Law of the People's Republic of China on Safeguarding National Security in the Hong Kong Special Administrative Region has come into force starting from June 30, 2020.

With the establishment of the Nation Security Department of the Hong Kong Police Force on July 1, 2020, the police will stringently enforce the law and conduct investigation to ensure effective implementation of the law in Hong Kong, the police said.

"Since June last year, Hong Kong has been tormented by turmoil and social dissension for over a year, and the stable law and order situation that this city used to maintain has been severely challenged," the police said, calling for joining hands to fight violence and the COVID-19 pandemic.

"The police will continue to professionally discharge its duties to uphold the rule of law and maintain law and order as well as social stability," the police added.