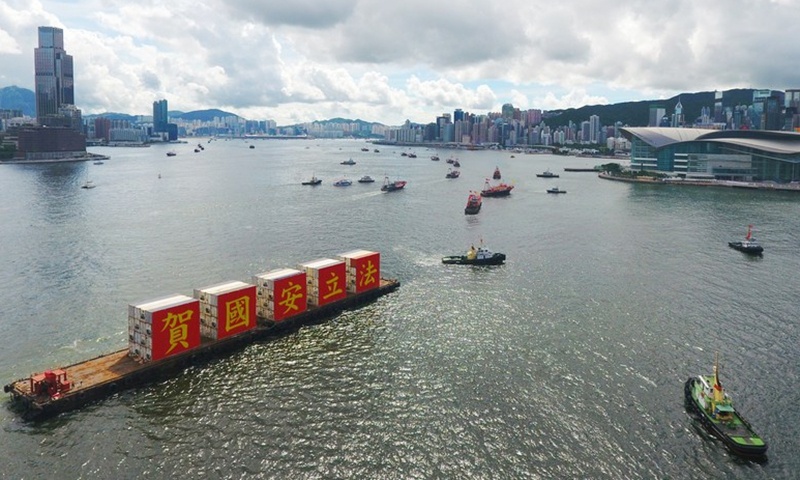 A ship carrying the slogan of "celebrating the passage of the Law of the People's Republic of China on Safeguarding National Security in the Hong Kong Special Administrative Region (HKSAR)" sails at the Victoria Harbour in Hong Kong, south China, July 1, 2020. (Xinhua: Lui Siu Wai)

The newly-established national security department of the Hong Kong Police Force (HKPF) is currently in the process of selecting and recruiting elite cross-function officers from the major criminal investigation departments in the Hong Kong Special Administration Region (HKSAR), which observers said marks the establishment of an "all-star" disciplinary team that would be made of officers that are born to crack down on cases that endanger national security.

According to a Sunday report by Hong Kong media outlet Wenweipo.com, in order to strengthen the department's intelligence and detective capabilities, the Senior Superintendent of the Organized Crime and Triad Bureau (OCTB) Li Kwai-wah and Chief Superintendent of Criminal Intelligence Bureau (CIB) Wong Chung-chun would join the department. What's more, other talented officers from the CIB, OCTB, the Cyber Security and Technology Crime Bureau and Financial Investigation Group will also join the department.

The HKPF confirmed with the Global Times on Sunday that the report of OCTB is mostly accurate.

The manning of the department closely follows the national security law for Hong Kong's implementation and reflects the region's determination to implement the HKSAR government's constitutional responsibility to safeguard national security, Fan Peng, a member of the Chinese Association of Hong Kong & Macao Studies, told the Global Times on Sunday.

As the department is dedicated to dealing with national security issues which are arduous and complex, the HKSAR government is selecting experienced officers who have passed relevant quality and national security reviews, Fan noted.

According to the national security law, in order to strengthen its investigation force, the department can also hire qualified professionals and technicians from outside of the HKSAR to assist in tasks that safeguard national security, said wenweipo.com.

Observers noted that this means police officers from the mainland can join the branch and serve in the Hong Kong police force, which is a significant breakthrough for filling the HKSAR's talent gap, regarding the HKPF's ability to handle national security cases.

Unlike other police departments, the national security department of the HKPF is a political organization and assumes strong political responsibilities, since it will deal with cases that endanger the "one country, two systems" principle, aim to jeopardize central authority, promote subversion, and potentially harm national security, Fan noted.

It is essential that cross-function integration and sharing of resources is promoted to better serve national security and social stability; that is, the National Security Office in Hong Kong and other authorities need to ensure cooperation is prioritized, Fan said.

Hong Kong Security Secretary John Lee Ka-chiu told the hk.on.cc on Friday that the department can mobilize other units including the HKPF's Special Duties Unit, the elite counter-terrorism unit within the HKPF, which is also known as "Flying Tiger Squad" when cases are found to involve terrorist activities and endanger national security.

Lee noted the department would face "national adversary" and therefore it must be strong and ensure the requirements for its personnel are high. All potential officers must pass a national security review and are required to have abilities such as intelligence gathering, analysis, insight and judgment, as they would have to handle the nation's top secret information.