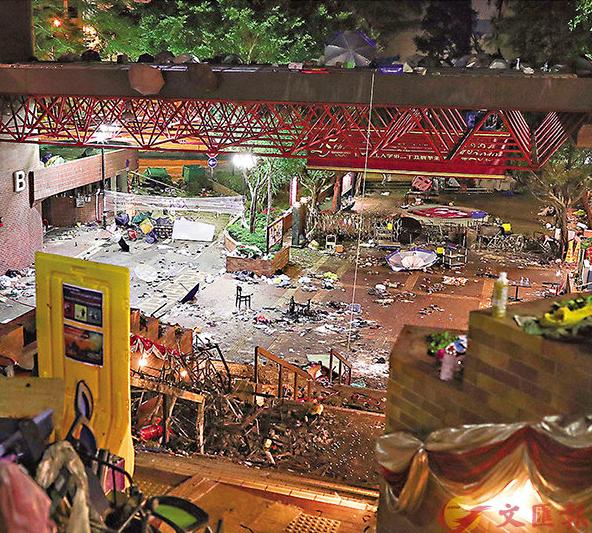 HONG KONG, Dec. 6 (Xinhua) -- The Hong Kong police said Friday that they have seized in a park 59 bottles of dangerous chemicals suspected to be stolen by rioters from university laboratories.

The police received a report that rioters have stolen a large number of chemicals from laboratories of a university and stored them in the vicinity of the Shing Mun Reservoir. After investigation, the police seized 59 bottles of chemicals with a total volume of 137 liters near the barbecue area of the Shing Mun Reservoir country park, Chief Superintendent of Police Public Relations Branch (PPRB) Kwok Ka-chuen told a press conference on Friday.

The campuses of several universities in Hong Kong were occupied and vandalized by radicals last month. The police said earlier this week that they have seized around 10,000 petrol bombs and a large number of chemicals, offensive weapons and raw materials of explosives in the Chinese University of Hong Kong, the Polytechnic University of Hong Kong and other tertiary institutions and their vicinity.

"Previously, the police have received reports from universities about theft of chemicals from their laboratories. Unfortunately, we have not yet received a full list of the missing chemicals, which makes our investigation rather difficult," Kwok said, urging the universities concerned to provide relevant information to the police as soon as possible.

He also reminded the universities of the proper storage of such chemicals and dangerous goods, emphasizing that reckless disposal of these chemicals is an extremely irresponsible and dangerous act.

Since Monday, the police have arrested 22 people, including 18 males and four females aged between 15 and 84. Their offenses included taking part in riots, assaulting police officers and criminal damage, among others, said Senior Superintendent of PPRB Kong Wing-cheung.

Kong warned against the act of criminal damage to public facilities, especially the rioters' vandalism of hundreds of traffic lights in recent months.

"Damaging traffic lights is a selfish act that will endanger all the road users, including pedestrians, motorists and passengers of vehicles," he said, adding that the maximum penalty for the offense of criminal damage is 10 years of imprisonment.